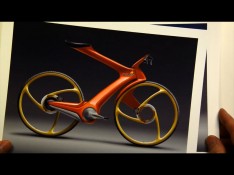 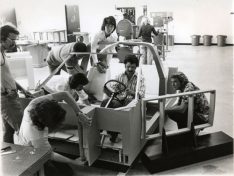 Materials at the heart of the Paris Motor Show

At this year’s Paris Motor Show, we noticed the rise of the importance of the Color and Trim Designer, sometimes also known as the Color, Material and Finish (CMF) Designer. Here at Allegorithmic we share this passion for materials, so here is an ode to the materials at the 2016 Paris Motor Show.

As the auto industry moves towards considering vehicles that require less driver input, profound questions are being raised concerning the space inside the vehicle and how the driver spends his time. Chris Wright talked to Ford of Europe’s design director Chris Bird and former design director Martin Smith about the potential implications of autonomous drive […]

Matthew Easton is a Visual designer at Volvo and has been responsible for the design behind the all new digital instrument cluster seen in the new V40. He tells us about his inspiration and the greatest challenges in creating a world class instrument cluster that adjusts to the driver’s needs – rather than the other way […]

Design evolution from 1941 to 2011 2011 marks the 100th anniversary of Chevrolet. During these 100 years the company developed over a hundred different types of cars, vans and trucks. All of those cars, vans and trucks have something in common: they all contain speedometers.

The Secret World of Printing Concept Cars in 3-D

The work that goes into building a physical model of a concept car is usually hidden behind closed doors, known only to engineers sworn to secrecy and similarly tight-lipped subcontractors. Ask anyone involved exactly which companies use 3-D printing technology to create concepts and the answer will invariably be, “many of them.” One company, however, […]

Car Design News was recently invited to a preview of Visteon’s C-Beyond concept, which makes its full debut at the Paris motor show in September. Based on a Citroën C4 Picasso, the C-Beyond is a showcase for new technologies – primarily focused on the car’s interior, which permit a degree of flexibility and design expression.

Developing a high quality and reduce lead time is an important policy in designing a new product in today’s highly competitive marketplace. To reach this objective, a systematic method that integrates several techniques is proposed. In designing products, one of the characteristics of a good design is consideration of the product life cycle in the […]

Ode to the Cup Holder

It changed our relationship with car interiors and forced manufacturers to innovate. The cup holder, in its modern automotive incarnation, is about 30 years old. It merits its own Wikipedia entry, which claims it was invented in 1943 by somebody named James Guillow. Well, who knows, really? However, the cup holder as we know it […]

Design management for performance and style in automotive interior textiles

In the initial 100 years of automotive development, the comfort and safety of passengers have been greatly enhanced by functional textile products. The focus of this research is to describe the current issues affecting innovation in the industry, explore the design and development of new textile products within the transportation textiles supply chain, identify types […]

The Development of Woven Velours for the Transportation Market

Woven pile fabrics may be found in upholstery, apparel, and industrial applications. This fabric formation technology may produces a variety of pile heights and densities appropriate to the end use. The development of woven velour fabrics for upholstery has become a specialized competency with few training possibilities outside the machinery manufacturers or in house training […]

Design Driven – The Development of New Materials in Automotive Interiors

Design is a critical component of the development of textile materials for automotive interiors. It contributes to the overall quality and cost of the vehicle interior. The appearance of the vehicle passenger cabin affects the perception and satisfaction of the occupants. This research analyzes how a fabric is developed through the supply chain from concept […]

Smart Textiles in Vehicles: A Foresight

After technical textiles and functional textiles, also smart textiles came into force a few years ago. The term â€˜smart textilesâ€™ covers a broad range. The application possibilities are only limited by our imagination and creativity. This paper gives an overview of the functions that can be achieved by smart textiles in general. In vehicles as […]