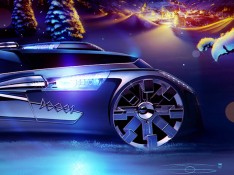 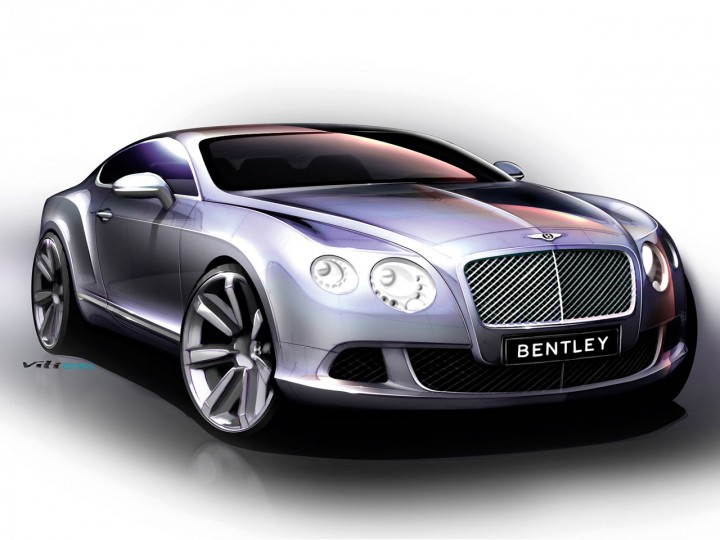 At the 2010 Paris Motor Show Bentley will present the new 2011 Continental GT, which replaces the model launched in 2003. Among the features are updates to the exterior and interior and a new V8 engine that joins the W12 biturbo unit. 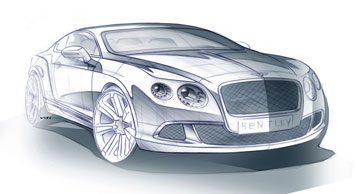 The Bentley Continental GT 4-seat coupé was first introduced in 2003 and was the first step in the brand’s renaissance.

The new model builds on the qualities of its predecessor, introducing a number of refinements in the design and technical specs.

The new design has a crisper, more defined appearance.

The body is produced using advanced techniques such as aluminium Super Forming (front wings and trunk lid) which allow for a more sculpted body and sharp ‘power lines’. 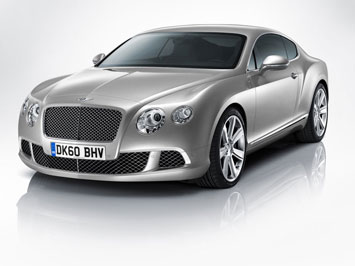 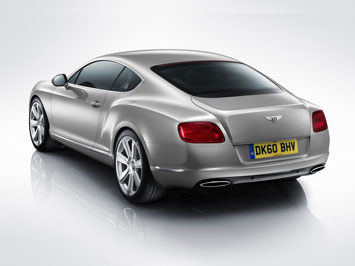 The front end is characterized by headlamps with LED daytime-running light and a more upright matrix radiator grille.

At the rear, the main design elements are the signature ‘floating’ LED lamps which extend around the corners of the wings and the ‘double horse-shoe’ motif on the trunk lid, reminiscent of the new Bentley Mulsanne. 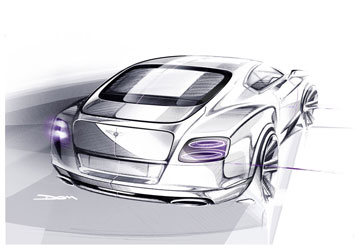 The 6-litre, 12-cylinder, twin-turbocharged powertrain has a raised output of 567bhp/423kW and 700Nm (516lb ft) of torque and is coupled to a new Quickshift 6-speed automatic transmission.

The FlexFuel technology allows the GT to run on both standard unleaded petrol (gasoline) and sustainable bioethanol (up to E85) or any mix of the two.

In late 2011 the Continental GT will be also offered with a new, 8-cylinder engine which will deliver a 40 percent reduction in emissions compared with the W12 engine. 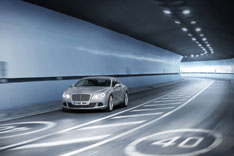 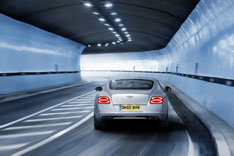 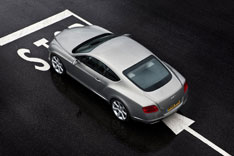 Both engines are coupled to an all-wheel drive system with a 40:60 rear-torque bias (compared with the 50:50 bias of the original Continental GT).

Below we report the official document that descibres the exterior and interior design development. 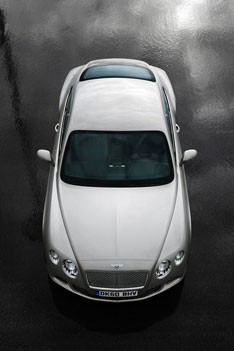 Inspired by the iconic Bentleys of the past, Bentley’s design team under the leadership of Director of Design, Dirk van Braeckel, has created a thoroughly modern, sculptured body, built with advanced production technologies to ensure the highest standards of quality and body integrity.

Aluminium Super Forming technology is employed to create the front wings and the boot lid. This process heats the aluminium panels to nearly 500 degrees Celsius before shaping them by air pressure. By using a single sheet of aluminium, no seams or welding are required.

The latest body construction techniques deliver crisp, highly defined feature lines and form to every area of the exterior design.

The familiar power lines and rear haunches – echoes of the original 1950s R-Type Continental – now have even sharper radii to create highly distinct surfaces, bringing the feel of a truly coachbuilt car to the new coupe. The GT coupe’s new look is bolder than ever.

At the rear, Bentley signature ‘floating’ LED lamps extend around the corners of the wings, emphasising the new coupe’s width and purposeful stance. The track is wider by 41mm at the front and 48mm at the rear than the previous model. The bootlid design has a powerful ‘double horse-shoe’ motif, reminiscent of the new Bentley Mulsanne, while flared elliptical exhaust tailpipes reinforce the new GT’s sporting credentials.

The shape of the new GT coupe’s body is also more aerodynamic following extensive wind tunnel analysis. In conjunction with a range of extensive underbody refinements (including wheel arch and exhaust aerodynamic aids) the GT’s coefficient of drag has been reduced to 0.33Cd and the lift at the front and rear axles has also been reduced to create greater stability at higher speeds.

The new GT is specified with 20-inch alloy wheels as standard, with, for the first time on the Continental family, the option to upgrade to 21-inch designs. Three styles of wheel are offered – a 20-inch five-spoke version and two 21-inch Elegant and split-rim Sports variations, which come in a variety of chromed and painted finishes.

“The new GT coupe has an even stronger sporting character than ever before. It is an exceptionally refined and comfortable 2+2 Grand Tourer but with the heart, soul and looks of a supercar.” explains Dirk van Braeckel, Director of Design. 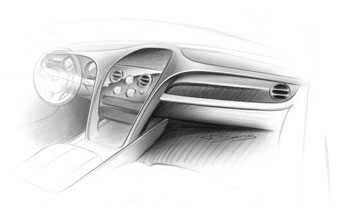 With an entirely hand-crafted interior, the Continental GT’s cabin sets new standards in refinement and luxury to create a stylish space in which up to four people can relax in total comfort.

The instrument panel and dashboard subtly echo the flying wings of the Bentley motif and are fashioned from the highest quality soft-touch leathers.

New touchscreen technology and chrome-bezelled dials are housed within this dynamic cockpit area, which rises from the centre console in the form of dramatically surfaced ’wing’ buttresses. 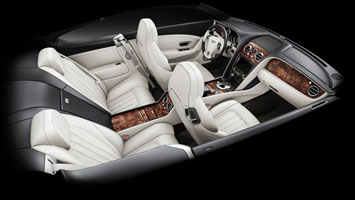 The striking and unique ‘Cobra’ design seats are supremely comfortable thanks to the introduction of the latest body-supporting materials which use complex foams to provide softness at first touch but with excellent support over longer journeys.

The seats can be specified with front-seat ventilation as well as a state-of-the-art massage system with 10 individual massage cells and individual side airbags are provided as standard for all passengers. 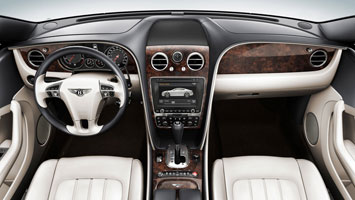 No other Grand Tourer offers such impressive levels of refinement thanks to the advanced noise-suppression technology that includes acoustic glazing, under-floor shields and hidden anti-vibration panels throughout the interior.

The cabin is trimmed with soft-touch leathers, a full range of wood veneers, cool-touch metals and deep-pile carpets – all hand-crafted in Bentley’s unrivalled workshops at the factory in Crewe, England.

The attention to detail even extends to applying a UV stabilizer to the wood veneers to protect from bleaching, thus ensuring they can be enjoyed as new for decades to come.

Every leather hide is still sewn under the watchful eye of Bentley’s highly skilled craftsmen and women. By incorporating ingenious, angled ‘ramps’ behind the leather, the interior designers have created sharp, well-defined styling lines, while maintaining a soft-touch.

Other simple yet practical functions include a powered boot as standard, Electronic Park Brake with Move Off Assist and newly designed, leather-lined door stowage bins with an integrated bottle holder.

Perhaps the most stylish new storage device in the new Continental GT is the exquisitely designed, folding, removable case designed to hold items such as keys and pens and which can also be slipped into a pocket or bag. Crafted from veneers to match those of the coupe’s interior, the case (available as a cost option) is finished with inlaid Bentley wings, satin-chromed and leather-lined, and is secured in a recess above the twin drinks holders in the centre console.

“The new GT coupe interior combines form, practicality and innovation. Our task was to translate the original design sketches for the car’s cabin – which were quite extreme, almost revolutionary for a Bentley – into the final design. The result is a cockpit that moves the Continental GT on to the next generation.” says Darren Day, Senior Designer. 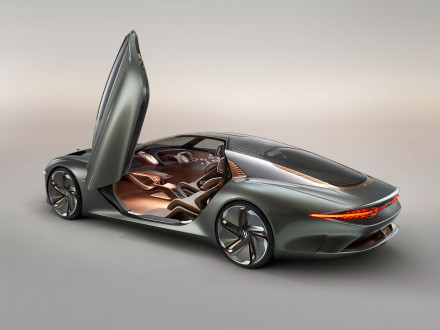