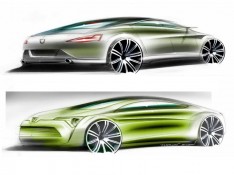 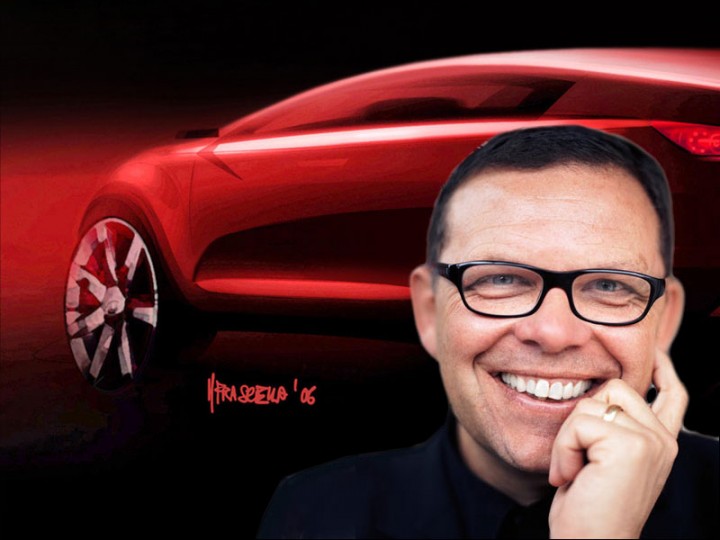 An official interview with Kia Motors Corporation Chief Design Officer, Peter Schreyer, who speaks about the brand’s current design language and direction. The document was released for the introduction of the new Sportage SUV at the 2010 Geneva Motor Show.

Peter Schreyer leans forward and picks up his iPhone. “I always look at objects like this,” he says, “because it’s a global product and it’s attractive to both men and women, young and old across the world. This is where I want to go with Kia’s design.”

Dressed in his trademark all-black attire and sipping an espresso, Schreyer speaks with an engaging energy and passion. “I see cars less as modes of transport and more as objects of desire. The allure of a Kia should extend well beyond the fact that it moves people from one place to the other.”

Since arriving at Kia in 2006 to take on the role of Chief Design Officer, Schreyer has injected the Korean carmaker’s line-up of new models – now spearheaded by the striking new Sportage – with a vital dose of visual dynamism to create cars with distinctive characters united by a bold and immediately identifiable face. 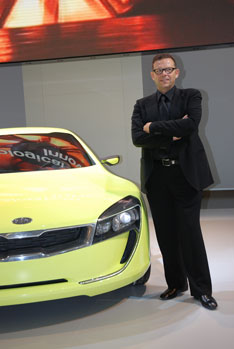 “The Kee concept that we showed at the Frankfurt Motor Show in 2007 was the first car that introduced our distinctive new grille – the ‘tiger nose’ as it’s now known,” explains the 57-year old German.

“When we started on this tiger nose,” he reaches for pencil and paper and begins to sketch the Kia face with swift and assured strokes, “I wanted a powerful visual signal, a seal, an identifier.

“The front of a car needs this recognition, this expression. A car needs a face and I think the new Kia face is strong and distinctive. Visibility is vital and that face should immediately allow you to identify a Kia even from a distance.”

Schreyer points to the flowing traffic below his Frankfurt office – a vast, immaculate office and decorated with numerous models and images of vintage planes. It features a striking floor-to-ceiling glass wall that gives him a bird’s eye view over one of the city’s busiest thoroughfares.

The evolving face of Kia is as vital as the new Sportage, Kia’s latest new model. Sleek and rakish, it’s a radical departure from the previous generation model. The Sportage is a crucial car for Kia because it’s sold globally in vast numbers. 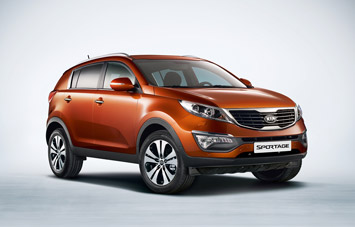 “There’s no point in designing a car with very specific cultural or geographic appeal. It should be universally attractive because a car’s design needs to survive globally, not just in one marketplace,” says Schreyer. “Those brands that have global appeal are in a very strong position.”

With its high shoulder-line, fast windscreen angle and prominently angled C-pillar, it exudes confidence and athleticism from every crease and shutline.

And of course, it features Kia’s now familiar ‘tiger’ face that although unique in its dimensions and format creates a striking family link with the rest of the Kia range.

“We had to balance what we created with what the market would accept and what our customers would buy,” says Schreyer, “and I think the result has a sporty and masculine look to it.” 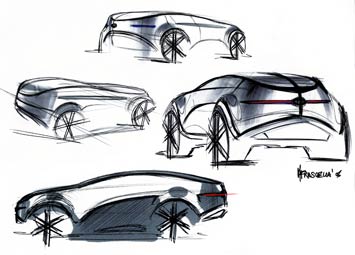 Look at the new Sportage and its visual links with the Kue show car – unveiled at the 2007 Detroit Motor Show – are hard to ignore. “We were partly inspired by the Kue show car,” confirms Schreyer.

“If you look at the side profile of the new Sportage, you can see a strong resemblance to the Kue, underlined by the show car’s distinctive sheetmetal motif which again is mirrored in the Sportage.”

While some manufacturers simply tease the car-buying public with futuristic concepts, the look and feel of Kia’s forward-looking show cars can easily be found in its subsequent production vehicles.

“We started work on the Sportage about three years ago,” says Schreyer as he traces the car’s timeline. 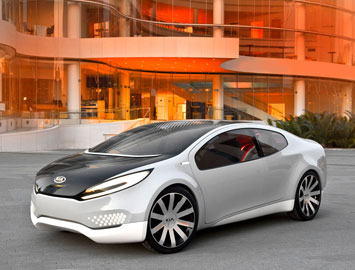 “We worked mainly with the design team here in Frankfurt and with our counterparts in California, so we’re talking about fifty designers in total. We started by analysing what the current Sportage means to the brand, what it means to Kia customers, what our customers expect.”

According to Schreyer, there were two divergent trains of thought – one idea was to pursue a tougher and more off-roadish theme, while the other was to create an agile and urban-friendly style.

Either way, the designs had to maintain the advantages of the four-wheel drive – a usefully high ground clearance, an elevated seating position and the feeling of being in command. “I encouraged our designers to go in both directions because there is always the chance that a design element from one could be used on the other,” says Schreyer.

“What we did in the end was create a car with a sportscar-like ratio between sheetmetal and glass – the side-windows are very narrow which gives you an almost rally-car feeling from the inside.”

“Then we moved onto sketches and quarter scale models. We then picked maybe three of the most promising ones and created full-sized models. This decision-making process takes three to four months, part of the entire eighteen-month design process. Such a quick process makes Kia very flexible,” explains Schreyer, “because time-wise we are close to market and can react very quickly.” 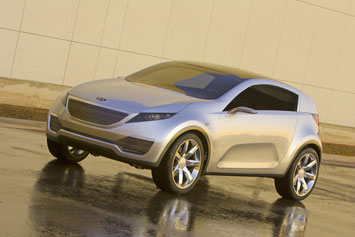 As a designer, Schreyer is constantly looking ahead to ensure what he and his team are working on now will still look fresh when it arrives in showrooms three years down the line. It’s a talent that is possessed rather than a skill that can be learned.

“Designers live in a world that is more forward looking than normal. We have a feeling about what is coming, what will be acceptable and desired. Not just in cars, of course, but in sportswear, electronics, entertainment, art and architecture.

“It’s something inside us that we…” Schreyer pauses until he finds the right words, “we feel and sense.”

So how does Schreyer perceive Kia’s design ethos? “When it comes to encapsulating Kia design I always refer back to the simplicity of the straight line. It means that we are trying to keep our design simple… and in design,” smiles Schreyer, “in design, simple is the hardest thing to create.”

Kia’s design language is based around architecture. “It’s the way the greenhouse sits on the body, the proportion, the graphic when viewed from the side, the wheel arch size, the face, the stance, the overhangs, and the down-the-road look and feel of the car. Everything should work together.”

The arrival of the new Sportage marks another design milestone for Schreyer and Kia’s design teams – another step closer to his goal. “I think the new Sportage is fresh and bold and couldn’t be mistaken for anything but a Kia. In the past to buy a Kia was to make a very rational decision. I want to create the situation where people see a Kia and want one firstly because of the way it looks, and then they discover that in addition to its great design it’s also attractively priced and has a great warranty. I want,” says Schreyer, “to give Kia global appeal, and I want that appeal to be about design above all else.” 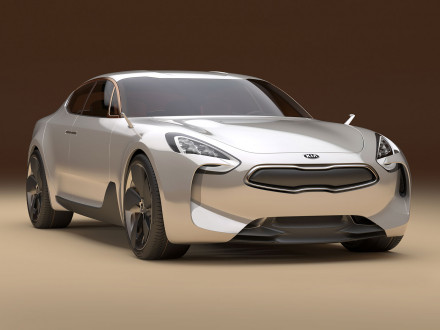 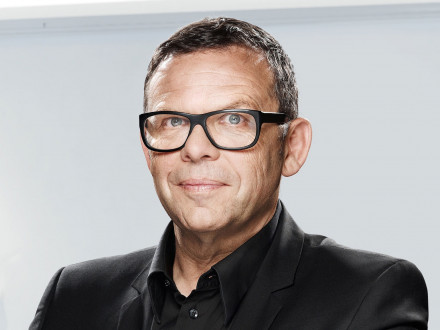