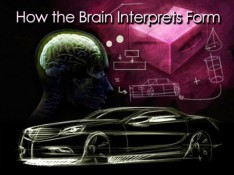 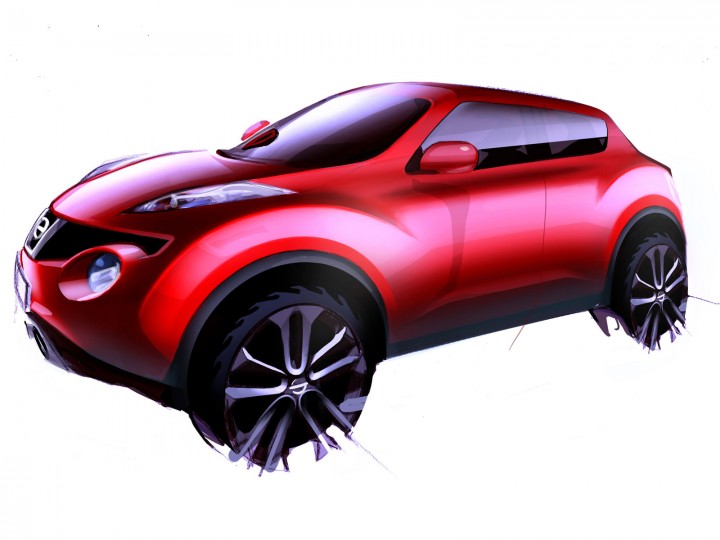 Set to debut at Geneva 2010, the B-segment Nissan Juke is is the latest addition to the company’s line-up of urban crossover. The exterior design is based on the 2009 Qazana concept car and combines a SUV-inspired lower section with a sporty upper section. 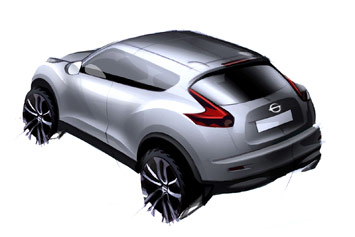 Designed to bring innovation, masculinity and dynamism to the B-segment, Juke combines of SUV toughness and sporting style.

Juke was created at Nissan Design Europe (NDE) in London, and refined at Nissan’s Design Centre (NDC) in Japan. Principle engineering took place in Japan with significant European input and Juke will be built in Nissan’s factory in Sunderland in the north-east of England and in Oppama, Japan.

“The design shows real optimism. By combining design elements from two genres to create a small, but striking Crossover that displays a genuine confidence and style. And those are qualities we also expect to find in a Juke customer,” said Shiro Nakamura, Senior Vice President for Design and Chief Creative Officer.

From a design standpoint, the lower portion of Juke is pure SUV, with chunky wheels, wide tires, extended ground clearance and a robust stance. 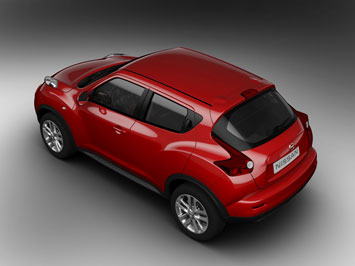 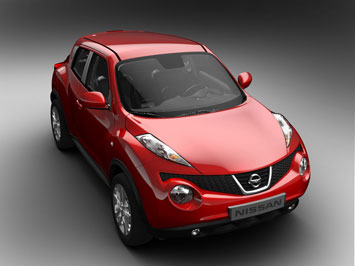 On the other side, the top portion is more reminiscent of a sports car, with a high waistline, slim visor-like side glass graphics and a coupé-style falling roofline. The coupé effect is further underlined by the rear doors which have their handles hidden in the frame of the door. 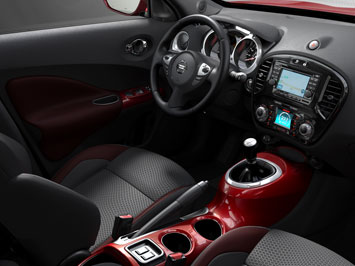 Inside, the sports car theme continues with a driver-focused cabin dominated by a centre console design inspired by a motorcycle fuel tank. Finished in a distinctive high gloss colour, the ‘bike’ console adds a sense of fun to the car.

Practicality is assured by the rear-opening hatch and versatile luggage area with hidden storage opportunities.

The Nissan Juke is based on the Renault Nissan Alliance B platform, with a 2530mm wheelbase.

On front-wheel drive versions, suspension is by MacPherson struts at the front with a torsion beam at the rear while four-wheel drive models have a multi-link rear suspension modelled on the system found on Qashqai.

In Europe, three offer of engines available at launch will include one 1.5 liter diesel (81 KW) and two 1.6 liter direct injection gasoline units (140kW turbocharged and 86 KW), all Euro 5 compliant. 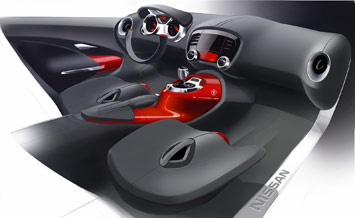 The range of transmissions include five and six speed manual gearboxes and CVT transmission, depending on the model.

The ALL-MODE 4×4-i electronic all-wheel drive system is available as an option and features torque vectoring technology to enhance agility and reduce understeer when cornering.

The market global launch is expected for OCtober 2010. The European version will make its public premiere at the Geneva Motor Show in March. The North American version is scheduled to debut at the New York Auto Show in late March. 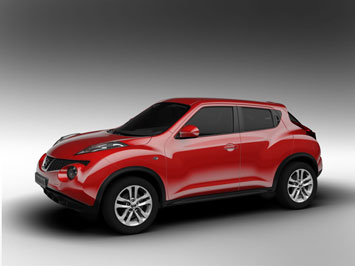 First revealed as the Qazana show car – unveiled at the 2009 Geneva Motor Show – Juke was created at the London-based Nissan Design Europe and refined at Nissan’s Design Centre (NDC) in Japan.

“The outcome of this global collaboration is a car that comes from where East meets West, with vital contributions from NDE and NDC being key to creating such a striking design,” said Shiro Nakamura.

Its highly individual lines are carried over virtually intact from Qazana. The boldness of the design reflects the significance of the B-segment in the European market: Europe is expected to take the lion’s share of sales ahead of the other main markets, including North America and Japan.

The design team drew inspiration for Juke’s design from a number of unusual sources. They looked back at a number of vehicles synonymous with an active and sporting life – and that list included rally cars and motorbikes. It’s clear to see where those ideas have influenced the design. 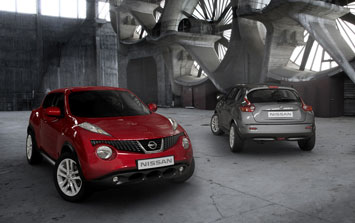 The result combines a number of different themes, but with Nissan DNA threaded through. It has a tough solid body to reflect the SUV element, yet is a very sensual car, too, with complex curves and a coupé profile accentuated by the narrow side glass and hidden rear door handles which help give the impression of two rather than four doors.

But there is also clear Nissan family DNA in the design – the boomerang rear lights, for example, from the 370Z – but none of the elements are slavishly copied so while retaining Nissan DNA, Juke stands alone as a unique, almost maverick, design.

This is a key theme running through Nissan designs. Alfonso Albaisa, Vice President, Nissan Design Europe, says: “Juke has elements inspired from other cars in our range such as 370Z and even Cube, but our intention is never to make obvious links between our cars but natural ones. Cube is a cool car, for example, and that coolness can also be found in Juke.” 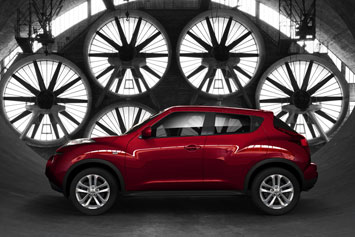 With generous ground clearance, big wheels and tyres, a high waistline and a broad shoulder line, the bottom ‘half’ of the car appears to be pure SUV. The impression is accentuated by typical SUV features such as the contrasting black sill and wheel arch finishers while at the front and rear, the lower bodywork emerges from underneath the car, resembling underbody protection.

At the front, the ‘sump guard’ forms part of the air intake assembly but rather than use a simple meshed grille, the design team have developed the moulding into a series of circular slots… which are suggestive of biotic elements.

Above the waistline, however, Juke shows its sporting credentials. A heavily raked windscreen, complete with Nissan’s signature Crossover upswept flick to the rearmost side window – and sloped roof-line provide a profile reminiscent of an aircraft’s canopy. 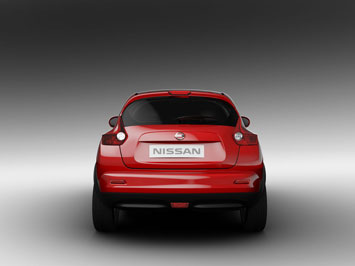 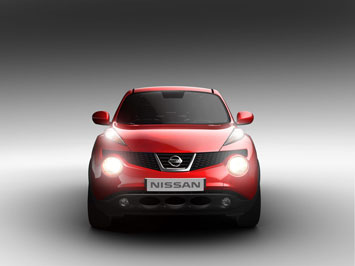 The rear of the roof incorporates an integral spoiler to reduce aerodynamic lift to help high speed stability. The neat duck-tail ridge was perfected with computational fluid dynamics (CFD) and tests in the wind tunnel. 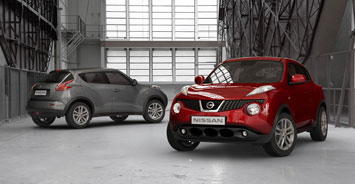 The lights also reflect the car’s sporting agility. At the front these are split into two distinct elements.

Framing the upper half of the bonnet, thin slashes contain running lights and turn indicators, while the main and dipped beams mounted lower on the nose of the car were inspired by the auxiliary lamps fitted to rally cars in the sixties and seventies.

At the rear, the tail-lights put their own spin on the boomerang shaped lamps found on the 370Z.

In total, a nine colour palette of exterior colours is planned, including two whites, a solid and a pearl, and three shades unique to Juke – Force Red, Haptic Blue and Machine Brown, though the total availability will depend on region. 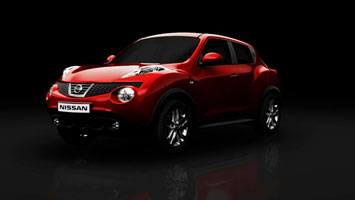 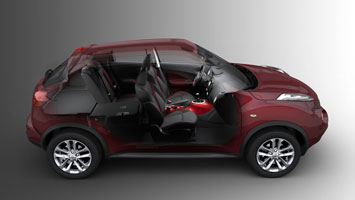 Seiji Watanabe, Associate Product Chief Designer: "We want our cars, our crossovers in particular, to have a spirit of agility, to be seen as light, nimble, reactive. Juke displays all these attributes and delivers a real sense of optimism.” 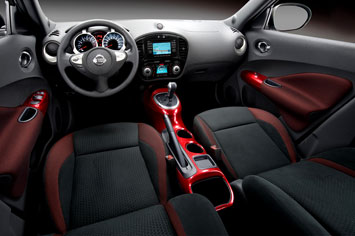 Juke’s active, sporting exterior is matched by its interior… where the dominant feature also displays a sense of fun: the centre console, finished in a high gloss paint, resembles a motorcycle fuel tank.

“It’s unexpected,” says Alfonso Albaisa. “And that gives the interior a certain sexiness.”

Reflecting the exterior’s blending of SUV and sports car attributes, the interior provides the commanding driving position but with all the attributes expected of a sports car.

The gear shift sits on the top of the ‘motorbiketank’ to guarantee slick changes while the tank itself is no mere styling statement but also provides a bracing point for the driver’s knee during spirited cornering. 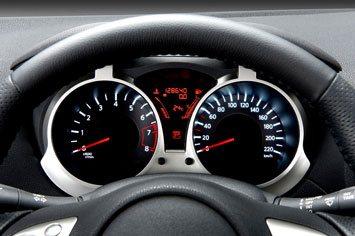 Similarly, the central stack – which incorporates the new Nissan Dynamic Control System – is ergonomically designed to ensure the driver has instant access to the information and drive mode controls.

Chrome fittings and high quality materials are used throughout while the interior colours – red or gun metal grey for the central console are available, depending on the grade; black, silver or red accents to the leather or honeycomb ‘sports’ fabrics – underscore the car’s sporting attitude.

Even the door arm rests, shaped like flippers used by scuba divers, reflect an active outlook. 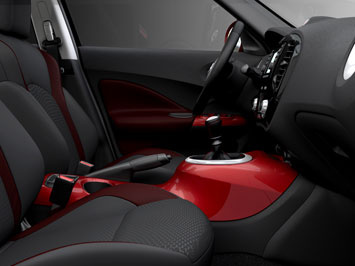 Despite its overall compact dimensions, the roomy interior offers competitive levels of space inside: front head room and rear knee room will be sufficient for most occupants. Unlike the Qazana show car, Juke is a full five seater.

The practical luggage area is large enough to take a nine inch golf bag or a maximum size suitcase and it also includes an underfloor storage area (4wd versions excepted) which takes its potential capacity to 251 litres (VDA).

In addition, the rear seats split 60:40, and also fold in one simple movement to provide a totally flat loading floor.

To hide luggage away, the trunk area has an integral tonneau cover which differs from the conventional by being attached to the tailgate and rises with the door when the trunk is opened.

“The interior displays a number of attributes which really sum up the entire car. There’s a lot of emotion here, a real sense of fun and a genuine quality,” says Albaisa. 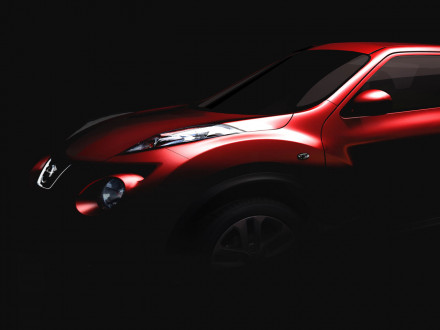 Nissan has released the first image and information on Juke, a compact crossover inspired by the Qazana concept car. The model will be unveiled at the 2010 Geneva Motor Show and will go on sale in the European markets from October.