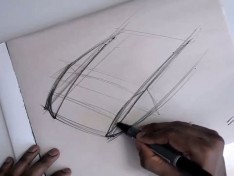 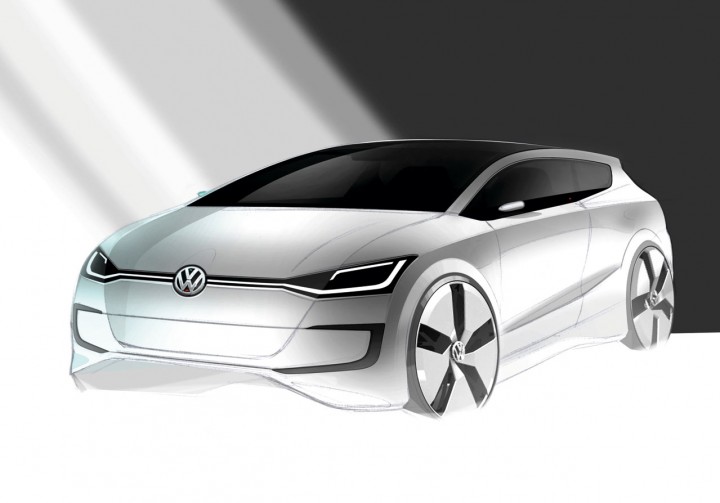 Presented by Volkswagen at the 2009 Los Angeles Auto Show, the Up! Lite Concept is a compact four-seater hybrid focused on efficiency which thanks to its 0.8 liter engine, the aerodynamic design and the weight under 700 kg achieves a fuel consumption of 2.4 liter/100km.

Premiered at the Los Angeles Auto Show, the
Up! Lite is defined by Volkswagen as "the world’s most fuel-efficient four-seater". It consumes 2.44 l/100 km (70 mpg/highway) and achieves CO2 emissions of just 65 g/km. 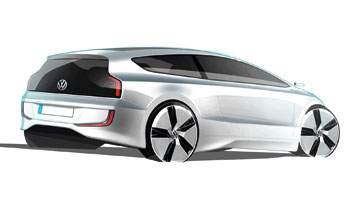 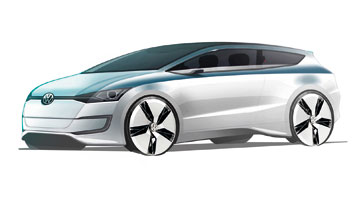 The Up! Lite features a hybrid powertrain consisting of a new TDI engine with 38 kW/51 hp, an electric motor designed as a pulse start module (starter, alternator and E-drive) and 7-speed Direct Shift Gearbox (DSG). 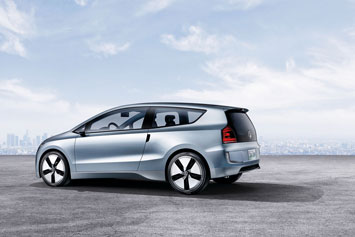 Compared to the E-Up! concept car presented at the 2009 Frankfurt Motor Show, he Up! Lite is lower in profile and – to satisfy more demanding aerodynamic requirements – it is longer, nearly reaching the length of the Polo (3.98 meters). The resulting drag coefficient Cd value is 0.237.

The safety frame is made of aluminium, steel and carbon fiber.

The design of the car is characterized by clean lines, as though sculpted from a block of aluminium.

Many of the components of the 695 kilogram light Volkswagen are based on those of the future New Small Family, an entirely new model series that is already scheduled for market launch in initial countries at the end of 2011. 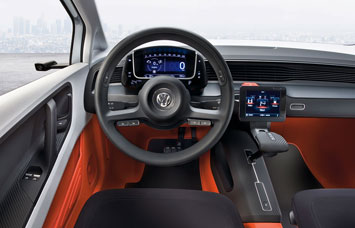 The radiator grille closes and opens automatically depending on the cooling needs of the engine (“active thermal management”).

The rearview mirrors have been replaced by three cameras with a more aerodynamic shape.

When the car is parked in the summer, hot air is vented to outside the vehicle (“passive park ventilation”). 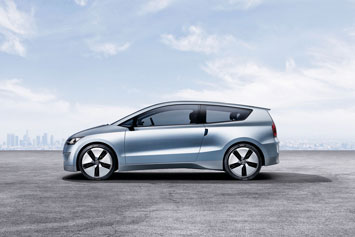 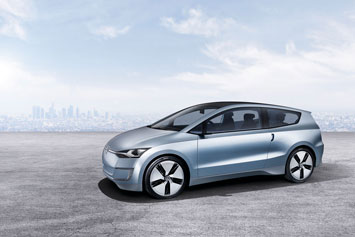 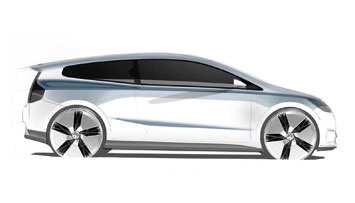 Even the most innovative car must look good to really be fun. And the Up! Lite with its “Liquid Blue Metallic” exterior is fun. That is because the 3.84 meter long, 1.40 meter tall and 1.60 meter wide Up! Lite makes a futuristic, bold and – in its form – very independent appearance.

It is a car that looks as though it were cast from a single mould. Compared to the E-Up! concept car presented at the 2009 International Motor Show (IAA) in Frankfurt, it is lower in profile and – to satisfy even more demanding aerodynamic requirements – it is longer, nearly reaching the length of the Polo (3.98 meters).

The styling itself portrays a compact vehicle that genuinely reflects its sustainable drive system and overall progressive concept. At the rear, the Up! Lite has the appearance of a distinctive hatchback sports car.

As a result, the broad shoulder section is definitely reminiscent of the Scirocco.

Furthermore, the look of the lower area is dominated by the large glass surface of the hatch, the LED rear lights and the rear fog lights (c-shaped) integrated in the bumper in typical Up! style.

The counterparts of these lights are found in the front bumper as front fog lights. The car’s side profile has clean styling with markedly smooth surfaces. 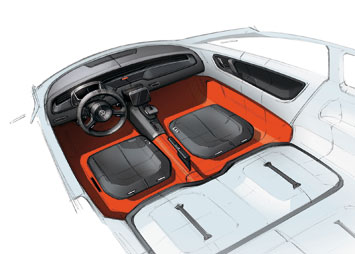 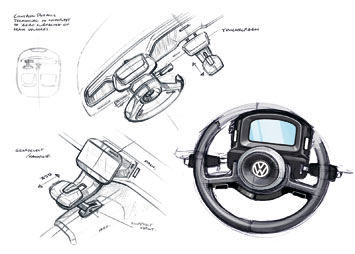 There are no edges except for the upper tornado line, the wheel wells and a connection line integrated there. The side cameras that replace the outside mirrors look like winglets on the wings of a cargo plane. 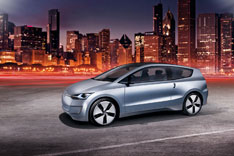 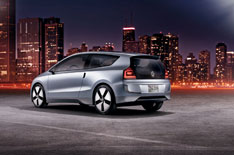 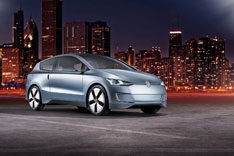 A novel stylistic and technical feature is represented by the 18-inch wheels, produced from a combination of aluminium and carbon fiber. 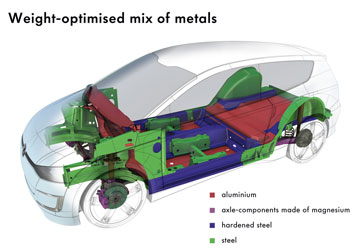 The body of the Up! Lite primarily consists of high-strength steel and aluminium. The frame is produced from hot-worked and includes the side members, centre tunnel, seat frames, areas of the A-pillars and wheel housings.

The upper section of the body-in-white, the so-called “Hat”, is almost entirely made of aluminium. Only the interior components of the B-pillars and roof rail (lateral front) are made of high-strength steel.

The exterior covers on the bumpers are made of plastic as usual. A highlight of lightweight construction is the 1.7 square meter roof of the concept car. It is “baked” from an exceptionally stable carbon fiber composite and weighs just 3.3 kilograms. 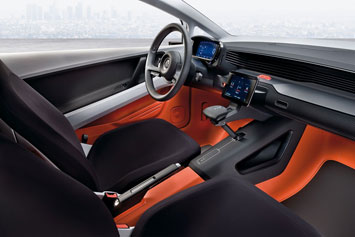 The Up! Lite concept offers space for four adults plus luggage. In terms of its length, the space it offers is comparable to that of the new Polo, however the Up! Lite has a narrower width to minimize its frontal area.

There is 217 liters of cargo capacity (up to seatback height) in the boot in its normal configuration (four persons on board). When the rear bench seatback is completely folded down, cargo capacity increases to 847 liters (loaded to ceiling height).

Instrumentation was reduced to absolute essentials with carbon- look instruments.

To the left of the steering wheel are pushbuttons for lighting functions, and to the right the start button for the engine/E-motor. 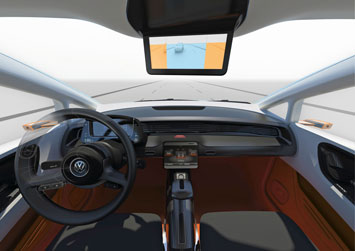 Three LCD displays are used to control nearly all vehicle functions and display information. A seven inch monitor serves as a central instrument in front of the driver.

On the centre console, meanwhile, a 5.7-inch touchscreen provides an interface for the climate control system, communication with the outside world (phone) and the infotainment field (MP3, video, Internet).

It was even possible to integrate user control of the 7-speed DSG in this concept from ergonomic perspectives. The classic gearshift knob was simply eliminated in the Up! Lite Instead, there is a manual control ball that feels like a large computer mouse. 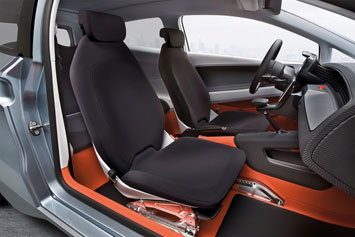 The specific gearbox function is simply activated by moving this “mouse” forward and backward. In parallel, the soft upholstered surface of the ball – also with a carbon look – can be used to access the touchscreen on the centre console, conveniently and precisely.

Instead of the classic inside rearview mirror and two outside mirrors, the Up! Lite has one rear camera and two side cameras (in the roof edge spoiler and at the height of the former outside mirrors).

Images from the three cameras are transmitted to the car’s third display is intuitively placed in the driver’s visual field in the vicinity of the previous rearview mirror.

During freeway and highway drives, the rear camera image is shown on the widescreen display with a previously unheard of width/
height ratio of 8:3. 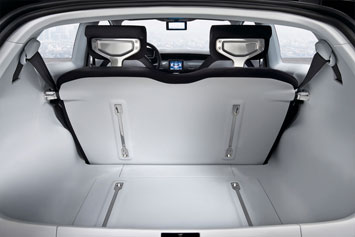 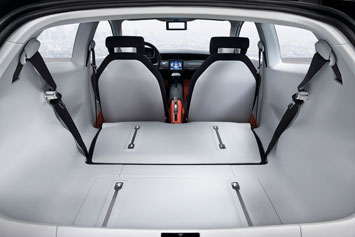 In the city, and for slower drivers, the rear camera image is generally shown in the central display together with images from the side cameras. This gives the driver an optimal visual representation of the car’s surroundings, without a blind spot. 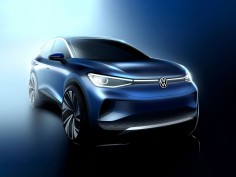