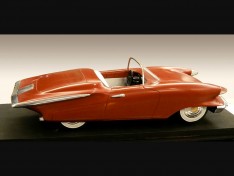 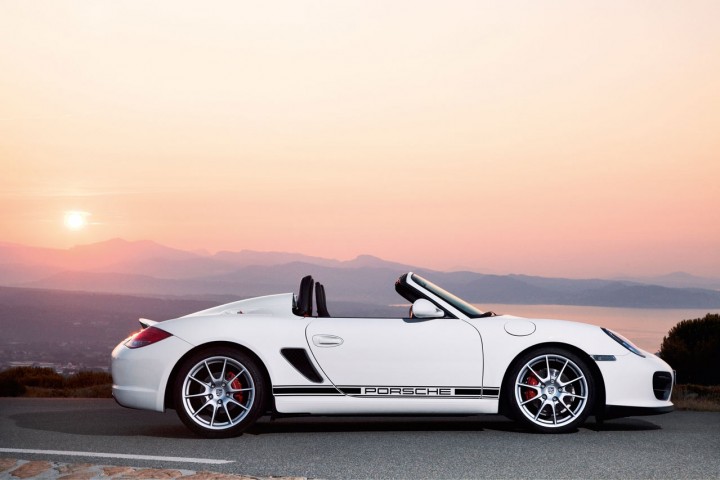 At the Los Angeles Motor Show Porsche will unveilel the Boxter Spyder, a special version of the roadster with a light soft top, reduced weight and sporty suspension setup. It will go on sale in 2010 with a base price of 53,000 Euros excluded taxes. 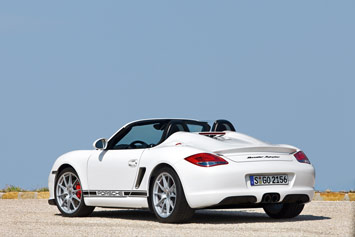 Porsche is introducing a new top version of the Porsche Boxster, a light mid-engined roadster making its world debut at the Los Angeles Motor Show in December.

Weighing just 1,275 kg or 2,811 lb, the Boxster Spyder mid-engined roadster – fully homologated for the road – is entering the market in February 2010 as the third version in the Boxster range, joining the Boxster and Boxster S.

The Boxster Spyder has been developed first and foremost for driving in the open air, the low-slung, light soft top extending far to the rear serving exclusively to protect the driver and passenger from bright sunshine, wind and weather. 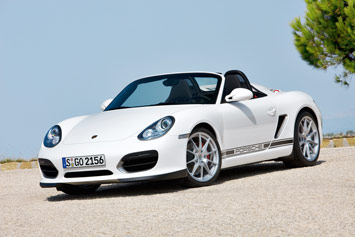 When closed, the soft top, together with the extra-low side windows and the two striking bulges on the single-piece rear lid, boasts a stretched and sleek silhouette reminiscent of the Carrera GT.

The Boxster Spyder features a 3.4-litre six-cylinder with Direct Fuel Injection upfront of the rear axle. Maximum output is 320 bhp, 10 bhp more than in the Boxster S.

Significantly less weight than the Boxster S, a lower centre of gravity and an all-new sports suspension give the Boxster Spyder racetrack-oriented driving dynamics.

Equipped with PDK Porsche-Doppelkupplungsgetriebe and the Sports Chrono Package, the new Spyder, using Launch Control, accelerates from a standstill to 100 km/h in 4.8 seconds. 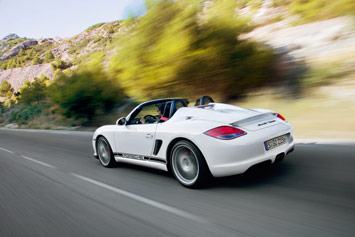 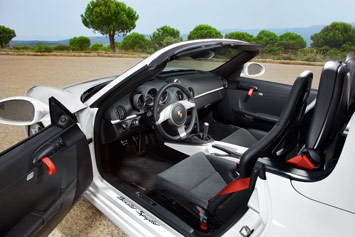 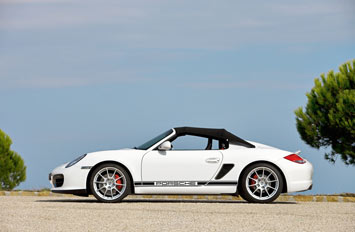 Again with optional PDK, fuel consumption is a mere 9.3 litres on 100 kilometres (equal to 30.4 mpg imp) in the NEDC New European Driving Cycle.

Market introduction of the new Porsche Boxster Spyder will start worldwide in February 2010. The base price in the Euro countries is 53,100 Euro.

Including 19 per cent VAT and national specifications, the market price of the new Porsche Boxster Spyder is 63,404 Euro. 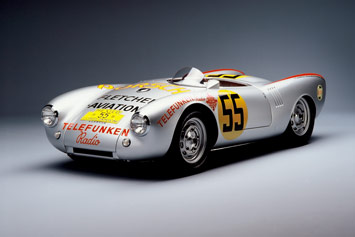 In terms of its fundamental concept, the entire Boxster family is the successor to the legendary 550 Spyder built back in 1953, both models sharing the same mid-engine roadster concept, low weight, back-to-the-roots lifestyle, and extreme agility combined with driving pleasure.

The 550 Spyder was the first sports car from Stuttgart-Zuffenhausen developed specifically for racing but also homologated for the road.

In the years following its production, this unique Spyder weighing only 550 kg or 1,213 lb, scored numerous victories on race circuits and in the road races so popular at the time.

The 550 Spyder was followed by other extremely successful Porsche Spyders such as the 718 RS 60 in 1960.

In 2004 and 2008 Porsche dedicated a limited edition of special Boxsters bearing the additional name Spyder to these legendary racing cars. By contrast, the new Boxster Spyder is a regular, specially developed and upgraded production model with far-reaching modifications versus the Boxster and Boxster S.