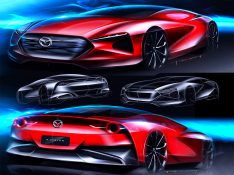 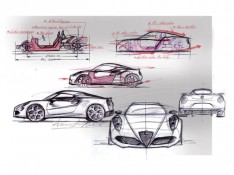 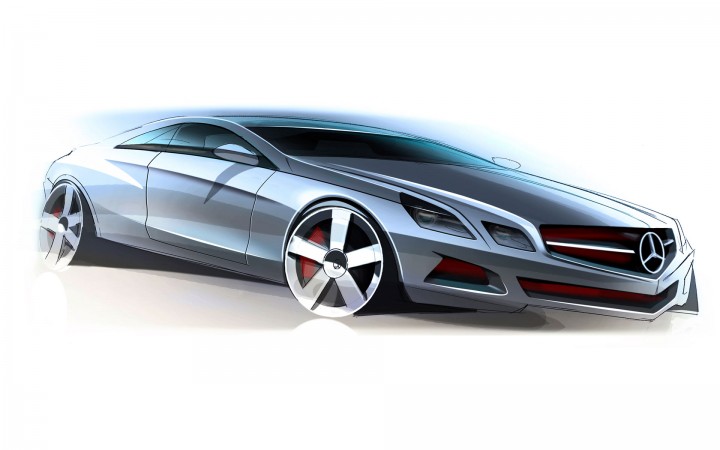 The official design story of the new E-Class Coupé, the model presented by Mercedes-Benz at the 2009 Geneva Motor Show which features an aerodynamic design with a drag coefficient of just 0.24. The document includes new images and design sketches.

The new E-Class Coupé was unveiled by Mercededs-Benz at the 2009 Geneva Motor Show, three months after the debut of the sedan. 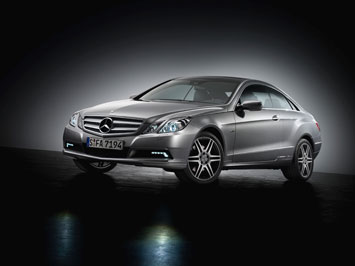 The Coupé combines classic coupé proportions and design – no B-pillars and fully retractable side windows – with a very aerodynamic body.

Thanks to a Cd of just 0.24, the E-Class Coupé is the world’s most aerodynamically efficient series-production car.

The best example is the E 250 CDI BlueEFFICIENCY Coupé, which consumes 5.1 litres of diesel per 100 kilometres and emits 135 grams of CO2 per kilometre, making it one of the most economical vehicles in its class. 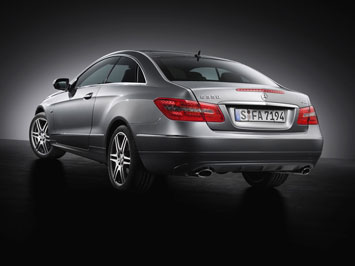 Fuel efficiency oriented measures include on-demand activation of the steering and fuel pumps, the use of tyres with low rolling resistance and an alternator control system which takes account of the current driving situation and the vehicle’s electrical power requirements, plus the very factor of outstanding aerodynamics.

Among the technical highlights are the selective damper control, drowsiness detection, preventive occupant protection and the Active Bonnet.

As a feature specific to the Coupé, the Dynamic Driving package allows different suspension setups at the touch of a button. Adaptive Main Beam Assist, road sign recognition and an automatic emergency braking
system are other features with which the new series sets standards in this
vehicle category. 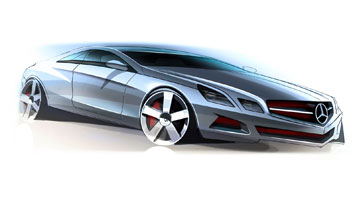 The new E-Class Coupé features many styling elements typical of Mercedes-Benz coupés such as the side window treatment which has no B-pillar to interrupt it and features fully retractable windows, or the characteristic sports radiator grille with the large central star.

The close relationship to the new E-Class Saloon can be seen in the twin-headlamp face which features a similar rhomboid design for the lights but with a sportier, sharper treatment which creates a more dynamic and incisive look. 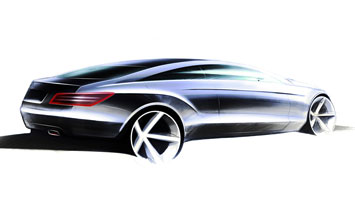 Another design feature which the Coupé shares with the Saloon is the powerful contour of the rear wing – a styling cue which also gave the S 220 “Ponton” Coupé of 1955 its athletic appearance.

Among the new distinctive design elements are the arrow shape of the entire front section from front bumper to radiator to hood, the more extreme interpretation of the twin headlamp face and its more sinewy build give it a racier and more dynamic presence.

Viewed from the side, the two-door model showcases its coupé proportions with the long hood, wide door, high shoulderline with elongated side window treatment, lowered roof line and a short rear overhang. 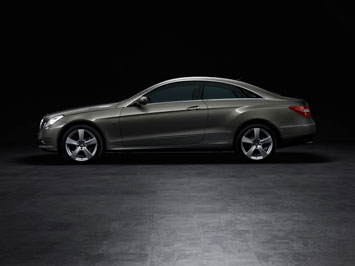 A powerful, muscular form which is integrated in the side wall over the rear axle and a slender, sweeping C-pillar add to the stylish appearance and embody agility and athleticism.

A characteristic of the contemporary Mercedes design idiom is the interplay of edges and surfaces.

Taut, sharply defined lines, which grow out of surfaces organically and disappear into them again equally gently, structure the sides of the coupé.

The wheel arches have deliberately been given different design treatments at the front and the rear. The resulting formal tension ensures that the overall design does not look too smooth. 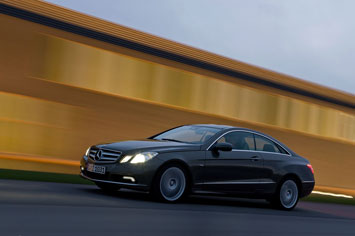 Indeed, it is the distinct difference between the front and the powerful rear that underlines the car’s athletic character.

From the front bumper to the radiator grille to the hood, the pronounced arrow shape of the front section emphasises the sporty character of the Coupé.

A central crease in the hood picks up this shape and trails back towards the windscreen.

The traditional twin headlamp face is based on that of the new E-Class Saloon, but has its own identity. Longer, more sharply inclined and flatter, the headlamps have a more dynamic look which is unmistakable. With their elaborate, high-tech interior and quadrant-shaped indicators, they add a sparkling finishing touch to the front of the vehicle.

A distinctive front apron with large air intakes gives the vehicle a strong, powerful presence. Two vertical struts in the front apron provide visual support for the radiator grille and give it a substantial formal base. Depending on the model version, the bumper houses either the fog lamps or the daytime driving lights and fog lamps side by side. In the versions with bi-xenon headlamps, L- haped day-time driving lights based on LED technology give the vehicle an expressive look. 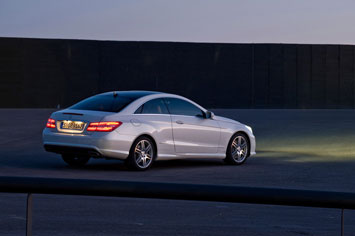 The rear wings spanning the rear axle are sculpted to create a
powerful, muscular form which visually enhances the vehicle’s width. The distinctive feature line – a characteristic Mercedes styling element – is continued around the back of the vehicle and into the tail lights, thereby forming a link between front and rear.

The LED tail lights are split and extend from the boot lid far into the side wall. In so doing, they emphasise the width and dynamism of the vehicle. 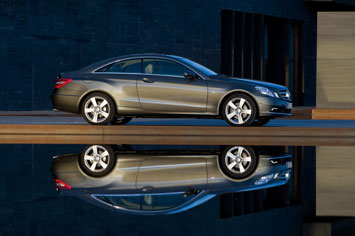 These light arrays accommodate the tail lights and the brake lights while the
reversing lights and an additional LED fog lamp are integrated in the boot lid light
units.

The narrowness of the gap between the light unit on the boot lid and that on the
side wall, as well as the extremely precise bevelling of the adjacent light lenses
allows light transmission between the two sections.

As a result, the night design
of the new Coupé maintains the perceived width and harmonious appearance of
the rear section.

The upswept rear bumper simultaneously creates a sense of lightness, underlines
the sporty character of the vehicle and serves as a visual differentiator for the different engine versions. 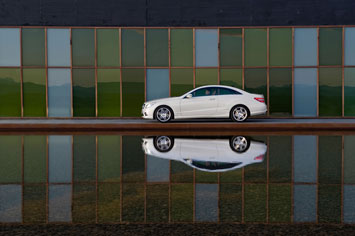 A single oval tailpipe indicates a four-cylinder model; the V6 Coupé models can be identified by two oval tailpipes while the eight-cylinder
model has two diamond-shaped tailpipes.

The range of paint finishes comprises twelve colours, five of which are new.

A high aluminium content and effect pigments provide the basis for the new
stannite grey.

Depending on the light incidence, it acquires a green to beige tinge
and brings out the forms of the new E-Class Coupé to particularly good effect. 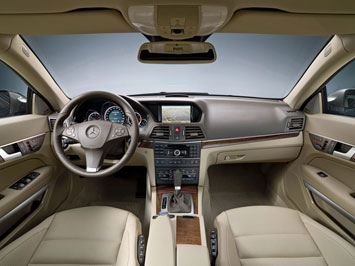 In the interior, the designers have continued the taut, sporty design idiom of the
exterior.

The interplay of surfaces and clearly defined lines creates an interior whose elegance and high perceived value are evocative of modern architecture.

The cockpit is structured horizontally with a dark upper section in order to avoid unwanted reflections. Interior appointments in two colours – in keeping with the logic of the two-level structure – create intriguing contrasts.

With its sporty look and feel, the cockpit design is clearly in keeping with the agile character of the new Coupé.

The instrument cluster with five tubes for the
dials and a central display has a slender look while the dials themselves are clearly laid out and have high-quality chrome surrounds as well as a silver backing for the scales. 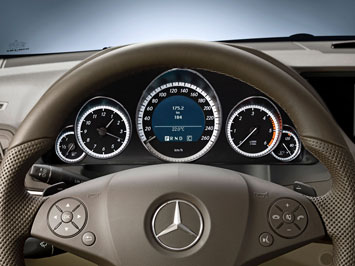 The background colour of the dashboard is silver or black, depending on the choice of trim elements.

The three-spoke steering wheel with
multifunction buttons is available in a number of different versions and colours
in order to match the interior appointments.

Next to the instrument cluster – and therefore in the primary field of vision of the driver and front passenger – is the display area for the control and display system
for the radio, navigation system and other functions.

The system is operated by means of a rotary and push-action Controller which falls conveniently to hand in
front of the asymmetrically split armrest between the front seats. 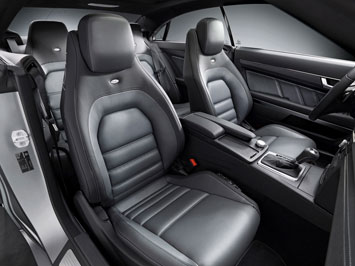 This armrest
also serves as a handrest when operating the Controller.

The horizontally structured dashboard flows into a centre console with a
dynamic, arrow-shape where the air-conditioner control unit is to be found
along with other features.

Light has an important positive effect on people’s sense of well-being.

This is why the interior mirror housing contains an ambient lighting source as well as read-
ing lights for the driver and front passenger. 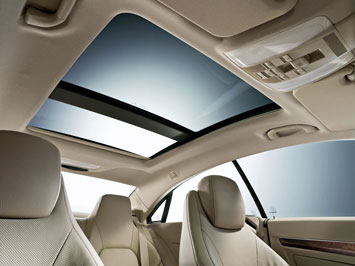 A particularly pleasant lighting ambience is created by the optional panoramic sliding roof featuring heat-insulating
glass which forms a continuous visual element extending from the windscreen to
the rear window.

This feature makes the interior brighter but can be covered by means of an electrically operated roller blind when required.

The sporty look and feel is underlined by the sporty design of the seats which also take the form of individual seats for the rear passengers.

Although the Coupé is deliberately designed as a four-seater, the rear backrests still offer a 1/3 to 2/3 split folding function.

The front integral seats with pronounced, faceted side bolsters and transverse piping on the seat cushion have a light, contemporary look and immediately create a distinctly sporty impression while offering excellent seating comfort.

The seats are upholstered in a combination of fabric and ARTICO man-made leather, or, optionally, leather.

The interior is equipped as standard with brushed aluminium trim elements with a sporty spin finish.

Customers can also choose from woods: burr walnut, high-gloss black ash or the graphic linearity of pine. In all cases, the trim elements have a thin chrome strip along their upper edge.

Five appointments colours are available: black, alpaca grey and almond beige (in the form of tone-in-tone combinations or sporty contrasts), as well as the special colours natural beige and flamenco red which are offered in conjunction with black as the contrasting basic colour. 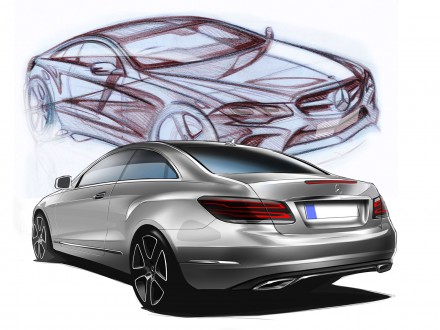 An extensive gallery of photos and a set of design sketches of the new Mercedes-Benz E-Class Coupé and Cabriolet versions.