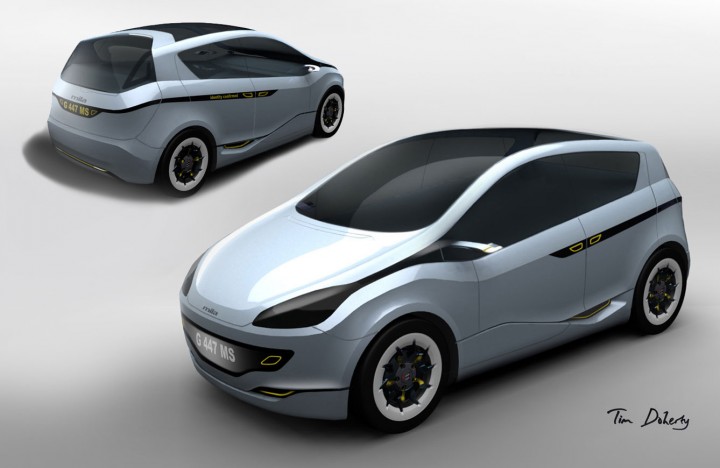 The official design story of the Mila EV Concept, the advanced electric vehicle presented by Magna Steyr at the 2009 Geneva Motor Show, which features a fully integrated modular platform and a design inspired by electricity. 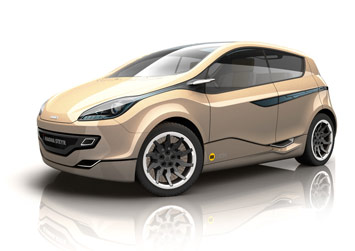 The Mila EV showcar was unveiled by Magna Steyr Chief Designer Andreas Wolfsgruber at the Geneva Motorshow this March.

The brief was to design a small family car with 4 seats, 5 doors and less than 4 meters in length.

"This was a departure from the other members of the Mila family, which were aimed squarely at niche markets. But what is common is the aspect of ecology and the modern thinking.

“The Mila cars always take a cue from contemporary technical topics within the Magna concern,” said Chief Designer Andreas Wolfsgruber, ”and as the company is now moving more and more into the field of electric power for passenger cars, it was decided that this would be the chosen theme for the new showcar.”

Tim Doherty, Senior Designer at Magna Steyr, was responsible for the design of the Mila ev. “The new design language symbolises new technology. As a theme we took ‘the flow of electricity’, with smooth, flowing, lines to symbolise the electrical current.” he explained.

”Across the car, precise edges express the core Magna characteristics of high value and quality.”

The elegant aesthetic was created as a further development of the mila concept family’s “DNA”. Typical of the Mila concepts is a negative surface in the bonnet to improve driver visibility, plus crisp surface treatment, prominent wheel-arches, a strong sill and a distinctive window-line.

Once the design had been approved by Andreas Wolfsgruber and by Magna Steyr’s Board, the sketches were passed to Mike Storey, a highly experienced member of the company’s surface-modelling team in Turin, to build the car in Alias.

Tim Doherty and Mike Storey worked in close cooperation to refine and develop the design. Two other members of the Magna Steyr design team were also involved in order to help define the details. 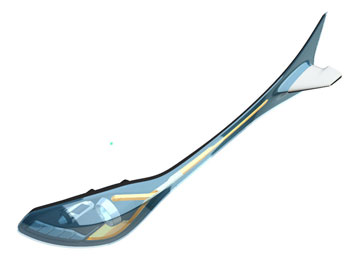 A notable feature on the car is the strong link between the headlamp and side glass to create a graphic reminiscent of a computer chip.

Behind the plexi-glass in this area is an extension of the indicator, acting as a side repeater.

This feature is complimented by the unique “sensor strip”, which begins on the front door just below the belt-line, and runs right round the back of the car.

The first purpose of the sensor strip is that if the driver has the electronic key in their pocket, the strip will light up when they run their hand along it.

This gives the signal that access is allowed, and the butterfly doors will then open electronically when pressed. The tailgate can be opened in the same way. 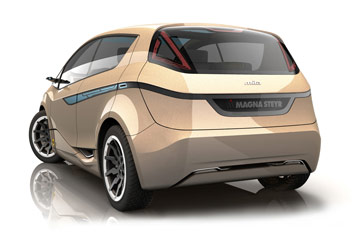 The other function of the sensor strip is to display the charging of the batteries.

The charge connector plugs into the rear of sensor strip and from there a light progresses forwards, allowing the driver to watch from a distance (e.g. from a service station restaurant) while the car is re-charging.

The whole sensor strip then glows with the soft blue light, meaning that charging has been completed.

The same applies in the scenario where empty batteries are simply being replaced by newly charged ones, as this would take a few minutes. 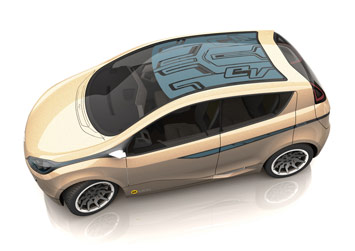 A secondary charging device is the trickle-charge (enough to power the air-conditioning) from the solar panel, which itself has a flowing pattern incorporating the “ev” logo, set into the glass roof.

The solar panels and number-plate areas also generate a small amount of power at night due to the light from streetlamps and other sources (car headlamps, shop windows etc).

Being an electric vehicle, it is important (due to limited power) that energy loss through drag should be kept to a minimum, therefore the car has rear view cameras to replace the usually bulky side mirrors. The cameras can also retract when the car is parked, to protect them from damage.

Magna’s Innovative Modular Concept utilizes Lithium-Ion Batteries and E-drive components integrated into a rolling chassis, which could support a number of different configurations and body shapes.

The chassis is designed with weight-saving in mind, in a cost-effective way. This means that the car has a dry weight of only 975 kg; a low figure for a 4-seater car with a length of 3,9 metres, a width of 1,74m and a height of 1,5m.

The showcar is purely electric, but could also be built with a range extender or hydrogen power. 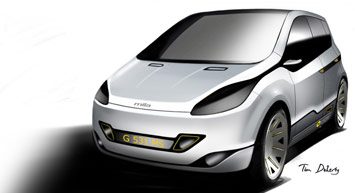 The maximum torque of the purely electric version is 120 Nm. It has a maximum power output of 50 kW, with 28 kWh of energy stored.

This gives a range of 150 km and a maximum speed of 120 km/h. Normal charging time is 6-8 hours, fast charging would take 2- 2.5 hours. Despite the space required for the batteries, the car is a full 4-seater with plenty of luggage space in the boot.

The car has self-illuminating number plates, which display the registration number and incorporate an identification chip to aid recognition.

This also has the advantage of sending “clean car” exemption signals to car-park gates, toll booths and congestion charge devices to save the driver from having to pay the charges. 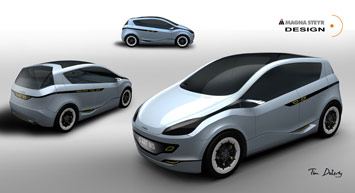 The Mila ev features air intakes around the number plate and in the lower bumper, to allow a flow of air to cool the electrics.

The air then exits via a stylish air outlet just ahead of the rear wheel, and also via a diffuser in the rear bumper.

“The air intakes and outlets have no visible grills,” adds Tim Doherty, “as this was seen to give a more modern appearance suitable for an electric car.”

The lightweight 18 inch alloy wheels were inspired by electric motors, and other details help to give the car a clean look.

The hood does not have an opening part, save for a small service hatch just forward of the flush-fitting (as per Mila Alpin) windscreen wipers. For maintenance and changing, the battery module and electronic components contained within the hood and in the floor of the car are accessed from beneath when it is raised on ramps.

The tailgate opens with a central aluminium hinge incorporating the third stop light which, like the rear lights, is constructed so as to offer the minimum blockage of the driver’s rearward vision. 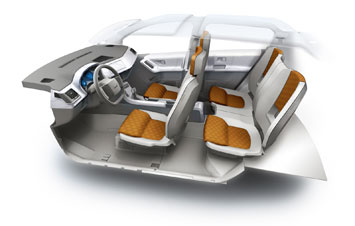 The designer responsible for the interior of the mila ev was Markus Knabl.

His brief was to create a light-weight, clean interior with a floating feeling and the same “flow of electricity” design language as the exterior.

“A key aspect of the interior was that it should be user-friendly” said Markus Knabl, referring to the fact that the controls and displays are reduced to a minimum.

The whole interface is concentrated within the steering wheel and on the centre console. The stereo is hidden behind a push-push cover in the dashboard, to maintain the interior’s simple, clear and modern appearance.

The silver band which runs along the door trims and across the dashboard is seen as an abstract “horizon line”.

This, combined with the defined edges in the seats and centre-console, gives the desired lightweight effect. Indirect lighting underlines this feeling and gives the opportunity to change the character of the interior. 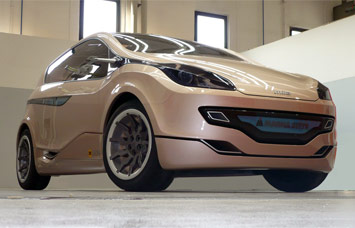 "Just as the use of alternative energy is successfully mirrored in the exterior and interior design language, the attitude and values of the owners would be reflected in their choice of vehicle."

Andreas Wolfsgruber believes that this would give the purposefully styled electric car a significant advantage in the highly competitive world of the automotive market.

“The choice of colour was also an important factor for this car,” he said. “Gold is used for the body because it denotes high value and longevity, and is synonymous with reliability in electronics. It is also a positive statement that we believe in the success which mila ev will bring us.” 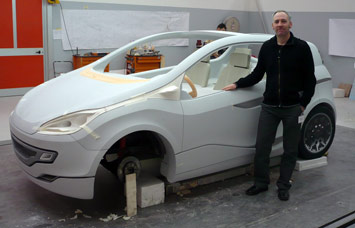 The Mila EV concept car follows on from the success of the three previous mila concept studies, including last year’s Mila Alpin, recently announced as winner of the advanced studies category of the IF Product Design Award 2009.

Magna Steyr Design works as a consultancy for many of the world’s best known OEMs.

Much of their consultancy work is highly confidential, so the show car is an opportunity to publicise their advanced design and engineering thinking.

"The multi-disciplinary design team is backed up by a highly experienced engineering capacity, and Magna as a whole makes up the world’s most innovative automotive supplier, with the stability to ride out the global economic downturn." 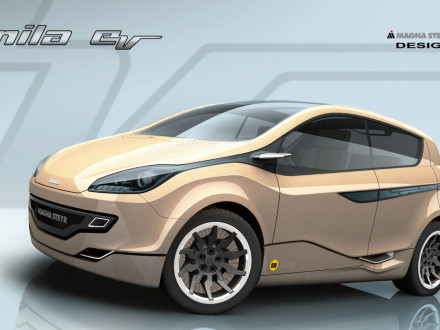 Magna Steyr has released the first image of the Mila EV Concept, an electric concept vehicle with a clean design inspired by "the flow of electricity". It will debut at the Geneva Motor Show. 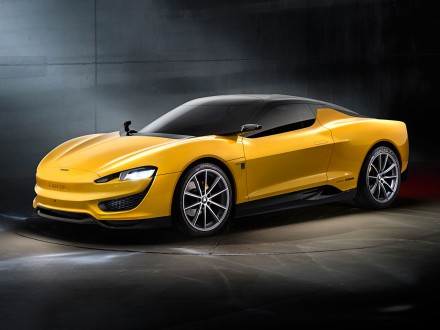 At the Geneva Motor Show Magna Steyr will present the MILA Plus, a study of a plug-in hybrid sports car that combines lightweight construction, a hybrid drive train and an emotion-driven design.