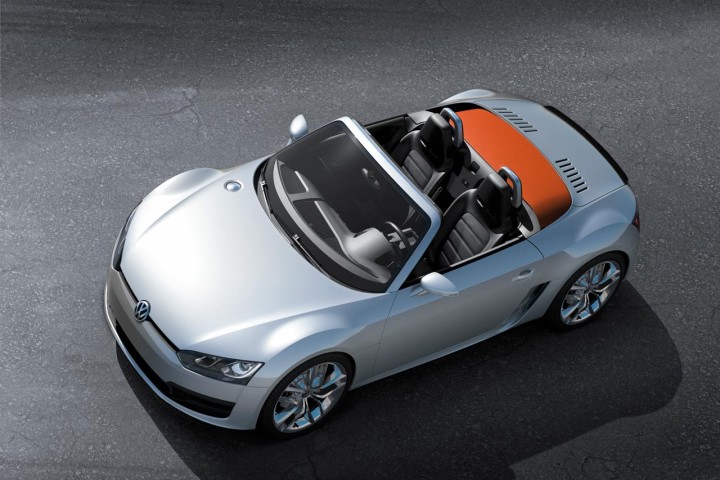 Presented at the 2009 Detroit Motor Show, the Volkswagen Concept BlueSport is a compact roadster focused on driving fun and sustainability. It is powered by a mid-mounted 2.0 liter diesel engine. The design uses styling cues introduced with the Scirocco and the new Golf. 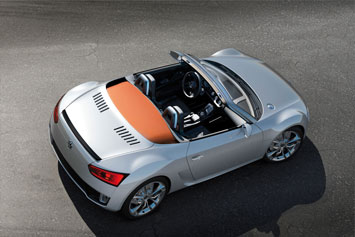 Behind the two seats of is a 132 kW / 180 hp
Clean Diesel (TDI) with common rail injection and
downstream NOx storage catalytic converter.

Tthe 2.0 liter turbo engine
develops its maximum torque of 350 Newton-meters at 1,750 rpm , which matches
the response of an approx. 300 hp six-cylinder gasoline
engine. 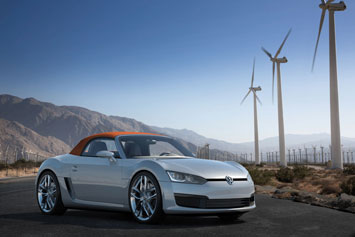 The unit is coupled with a 6-speed dual clutch transmission which transfers this power to
the rear wheels. It is shifted either automatically or via shift paddles
on the steering wheel.

The two objectives in the car’s development were maximum driving fun and minimal fuel consumption. 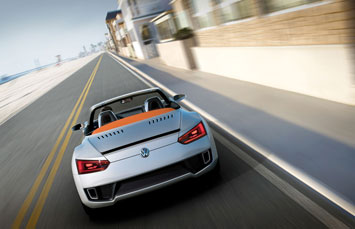 The total weight is less than 1,200 kg, a result achieved thanks to lightweight construction methods (the 27 kg soft top is the lightest in its class, and the hoods are made
of aluminum), and by a body layout with crisp and compact
dimensions.

Among the eco-technologies are the automatic start-stop system and braking
energy regeneration.

The cargo area under
the front hood has a capacity of 112
liters of luggage; its rear trunk offers additional 70 liters. 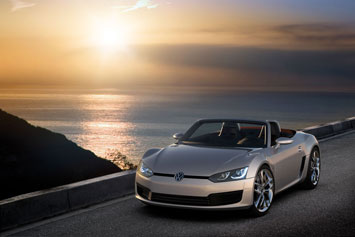 The Concept BlueSport – painted in Flex Silver painted and sporting
an orange colored fabric roof – was designed by the team led by Klaus Bischoff (Director of Design for the Volkswagen Brand) and
Thomas Ingenlath (Director of the Design Center in Potsdam).

“The
design of the Concept BlueSport,” says Klaus Bischoff, “represents a
perfect synthesis of technology and aesthetics. Its form is very clear
and is reduced to essentials; the car body itself has a lean and linear
structure.”

Thomas Ingenlath adds: “Emanating powerfully from this
car body are the circular wheel housings, flared out in three
dimensions as in a sculture.

"The radial surfaces, edges and blending
of forms emphasize the wheels and thereby the agility of the
BlueSport concept car. The lateral air intakes are identifying features
of the mid-engine layout, their volume-reducing design offers
visualization of the car’s sporty low weight.”

The proportions of the Concept BlueSport give it a
powerful appearance. Besides its low height of 1.26 meters, the car’s image is shaped by the fact that the wheelbase (2.43
meters) appears large compared to the car’s overall length of about
four meters, and the sumptuous track widths that are large relative to
the car’s width (1.75 meters). In front, the sports car exhibits a track
of 1.49 meters; in the rear it is 1.52 meters.

The body of the Concept BlueSport is significantly
shorter and flatter than that of the Scirocco, yet it is longer and a lot wider than the current Polo. . 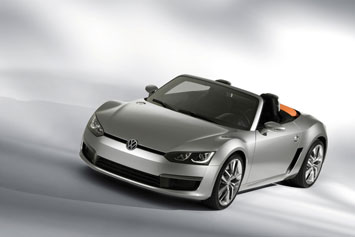 At its front, the Concept BlueSport is characterized by a new
Volkswagen design language introduced for the first time on the
Scirocco and the new Golf.

It is based on a ‘design DNA’ that will
leave its mark on all new Volkswagens. This design DNA was
developed by Walter de Silva (Director of Design for the
Volkswagen Group), Flavio Manzoni (Director of Creative Design
for Volkswagen AG) and Klaus Bischoff.

On the one hand, it
preserves historical elements, but on the other it represents a reinterpretation
of Volkswagen design. 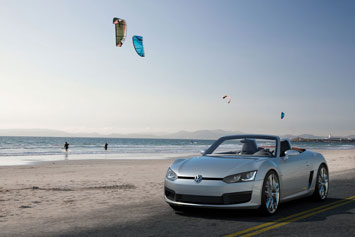 Familiar from the Golf and
Scirocco are the dominant dual cross beams that are formed by the
narrow radiator grille and the painted bumper.

In the lower area,
large air inlets in black extend across the entire vehicle width, and
integrated in them – under translucent, dark-tinted plastic covers –
are the LED flashers.

Meanwhile, the car’s interpretation of individual features shows just
how broad the range of vehicles is, in which these style elements can
be implemented.

This is visible, for example, in the bi-xenon headlights and
LED taillights.

The roadster look is evident in details
such as the daytime running lights designed as a narrow, C-shaped
light strip (in the main headlamp housing) or – in the style of highperformance
sports cars – the distinct outward flare of the fenders
whose forms are charged with energy.

Thomas Ingenlath, lead project designer for the BlueSport concept
car, sums it up this way: “The concept car looks into the viewer’s
eyes with a powerful, masterful look; everything is clear and precise.
Standing here is an agile athlete who has no need to display an
aggressive attitude.”

"We have taken a systematic approach to everything here", emphasizes
Flavio Manzoni: “Unique, simple, universal – that is the authentic
spirit of Volkswagen: clear design features in a complex world – this
is the philosophy currently guiding Volkswagen design. These are
cars like the Up! and Space Up! concept cars or the Scirocco and
Golf, which reflect the concept of aesthetic clarity without
compromise. And we are now carrying this forward with the Concept
BlueSport.” 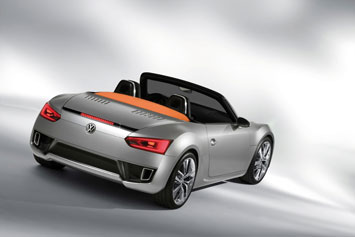 At the rear lines emanating from the
contour of the rear fender that frame a dynamic shoulder section.

In the center,
there is a large strip painted in car color, and in the upper section a
narrow black line that separates the bumper from the engine or trunk
hood. Prominent on this line, which also joins the taillights, is the
VW logo.

The shapes of the taillights themselves were
designed to be similar to those of the headlights.

Inside, the lights
both have a C-shaped LED component that radiates far and
extremely brightly into the night with each brake actuation. The
third brake light was integrated in the rear trunk lid, above the VW
logo.

In the lower section, a horizontal surface in black is the defining
visual element; the tailpipes are located at its outer edges – right
next to the contour of the fender lines. The end of the bumper –
together with the lateral fender and wheel housing panels – forms a
virtual surface painted in car color. At its center the bumper exhibits
an area that is aerodynamically designed as a diffuser. 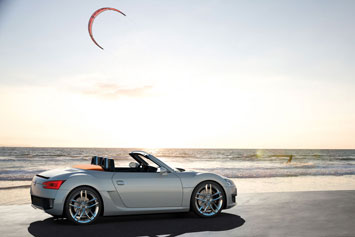 On its sides, once again it is the circular-shape of the wheel housings
and outer fender edges – typical of Volkswagen – that are part of the
clear line-work

. In addition,
the extremely short overhangs define the car’s side profile styling.

Moreover, the ten-spoke alloy wheels with tires in the sizes 235/35
ZR19 (front) and 245/35 ZR19 (rear) – that completely fill out the
large wheel housings – controibute to the sporty look. 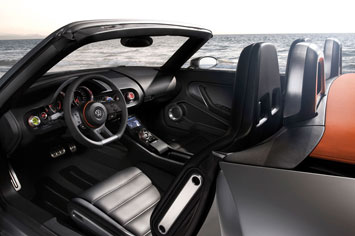 The interior of a sports car should fit as though it were tailor-made.
Everything must be ideally set up to reach, operate, control, and
must exhibit a high level of aesthetics.

Klaus Bischoff explains: “The interior shows finesse in details and conveys a high level of
technological fascination. The special flair of the interior expresses
itself in the architectonic purity of its components.”

The touchscreen features a human-machine interface similar to that of the Volkswagen Up! concept car.

It is located right at
the imaginary transmission tunnel and controls all the information and entertainment
functions. 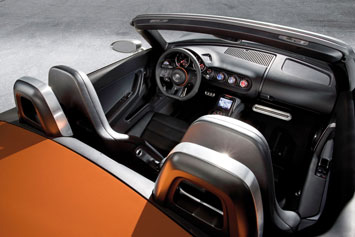 Right in front of it there is a
multifunctional steering wheel that is used to operate the
dual clutch transmission.

Above the touchscreen are the three large control dials for the dualzone
automatic climate control system.

They are located on a cockpit
section traversed by vertical slats. These slats simultaneously serve
as both air vents and style features.

When the control dials of the
automatic climate control system are turned to the left, in the “colder” direction, the control unit’s display becomes
more blue; when higher temperatures are set the display turns“reddish”.

Visually similar to the climate controls is the light switch located to
the left of the steering wheel. In terms of color, the orange of the
convertible top is repeated in the basic illumination of the cockpit
switches.

The designers also redesigned the large round instruments
and the multifunctional steering wheel. It is equipped with keys for
controlling the audio system, telephone, on-board computer and dual
clutch transmission (DSG).

Adapted to the interior are the lightweight, leather-upholstered
sport seats with their one-piece seatbacks. Behind the

Directly behind this is the manually-operated convertible
top which is operated manually . Thanks to a classic Z-fold
and low top weight, this can be done in a matter of seconds. 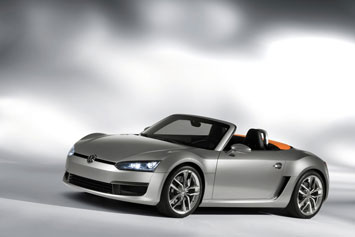 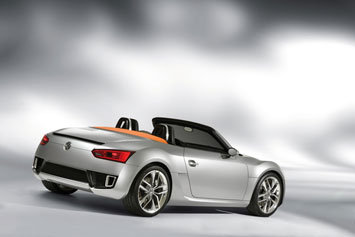