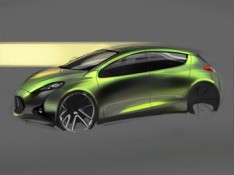 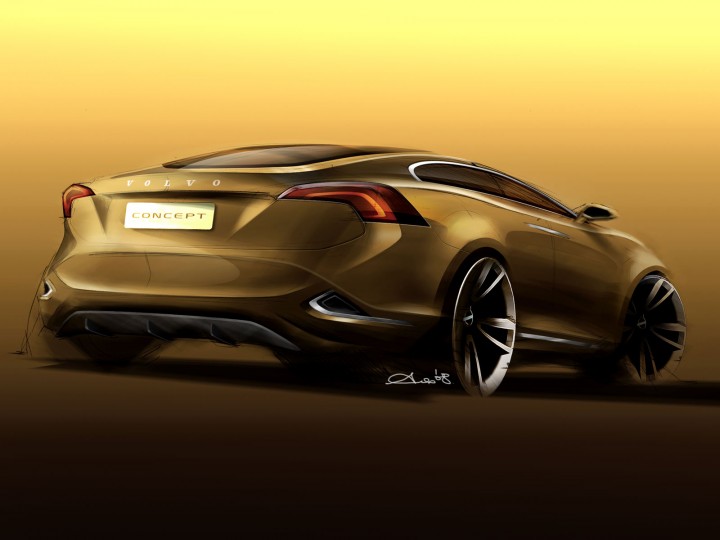 The Volvo S60 Concept is a design study that previews the production model scheduled for 2010 and gives indication of the future brand’s formal language. The design features pronounced coupe-inspired lines and a futuristic interior. 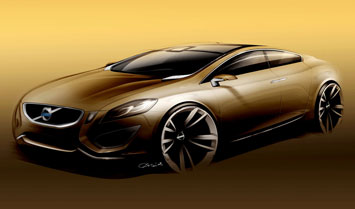 Debuting at the Detroit Motor Show in early January 2009, Volvo S60 Concept previews the production version of the all-new S60 which will be introduced in 2010.

The first-generation Volvo S60 was launched in 2000 and was profiled as a coupe with four doors. The car’s sporty nature has made the S60 one of Volvo Cars’ most global models.

The coupe-inspired lines of the original S60 are even more pronounced in the next generation.

Combined with a range of other technical measures it allows to cut carbon dioxide emissions to 119 g/km (5.0 l/100 km). 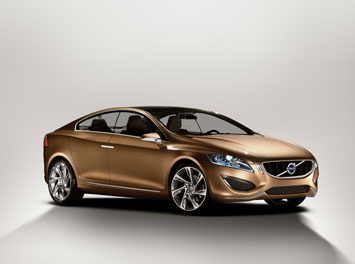 The concept car gives a clear indication that the Volvo Cars design team is stepping up to the next level in the development of the products’ DNA.

"The modern Scandinavian design of the S60 Concept reflects the "Do Not Abandon" approach to the strengths of the brand’s design language.

He adds: "The concept car’s exterior gives a clear indication of what customers can expect of the all-new S60. On the inside we’ve been even more daring – there the focus has been on creating a vision of the future in the slightly longer perspective."

The front of the S60 Concept naturally sports the enlarged iron mark in the trapezoidal grille. The 3D Volvo letters in the iron mark are embedded in an illuminated panel. The grille itself has a somewhat new appearance with structured horizontal vanes adding refinement to its form.

Two DNA lamps flank the grill. They emphasise the vertical stance of the front and promote the bonnet’s V-shape. The DNA lamps also become the starting points of the fresh sculptural design language of the bumpers. 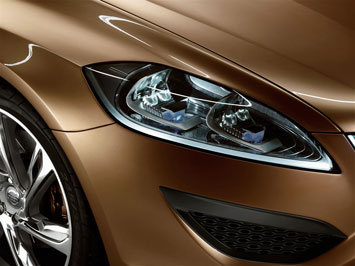 The angled headlamps flow up into the strongly sculptured bonnet. Combined with the lower air intake’s reverse trapezoidal shape, this gives the concept car a very expressive "face".

"Dynamic and with considerable character, but without appearing aggressive. This car is packed with inspiration from Scandinavian design and from the Swedish coastline’s cliffs and seas. A thrilling blend of drama and sensuality," says Steve Mattin.

Viking longboats in the headlamps

In each of the headlamps, the lights form a sculpture creating the image of two miniature Viking longboats sailing side by side, one for main beam and one for dipped beam.

When driving in the dark, the light is reflected from the concealed, upward-facing High Performance LED bulbs, projected ahead by the ships’ filled sails.

A closer look reveals a number of specially designed details. The compact cooling system for the LED bulbs has protruding cooling blocks made out of aluminium, semi-visible under the ships’ hulls.

The design creates "the illusion of shimmering glass panels that float above a dark and mysterious Scandinavian sea". The semi-transparent housing incorporates a layered ring-like formation that is part of the position lights. "You can see the confident face of the concept car illuminating in a ring-like formation."

The transparent attachment of the door mirrors illuminates fully and becomes part of the indicator function. The panorama roof is another ingredient that contributes to the concept car’s airy Scandinavian aura.

Viewed from the side, the concept car’s slim coupe roofline and window graphics are accompanied by an entirely new lateral shoulder line, forming a gentle double wave. Stretching from the headlamps all the way to the tail, it adds emotional excitement and plays with the surface and its highlights. 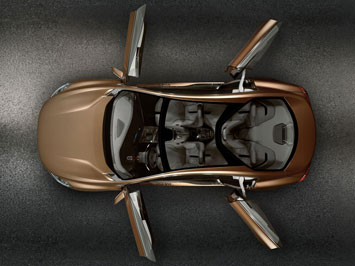 The unique rear parallelogram doors offer a spectacular show whenever they are opened and shut.

Door opening is initiated by pressing on a button and the movement starts off in the traditional way. In the next phase, the forward section also swings out away from the car’s body and the door glides parallel with the side of the car until it reaches its end position by the rear wheel.

Since the car does not have a B-pillar between the front and rear seats, this door configuration offers exceptionally generous entry and exit access.

Both the seven-spoke 20-inch wheels and the tread of the low-profile tyres have been specially designed. The bronze-painted brake callipers match the car’s paintwork and accentuate the concept car’s muscular, sporty looks.

Inspiration from the racing track 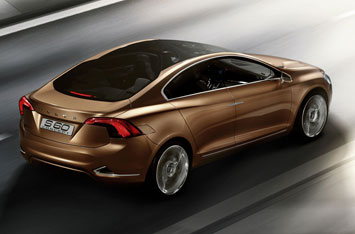 "In forthcoming models, you will see more and more of our "racetrack" design cues. The car’s lines do not end abruptly but instead forge a continuous flowing pattern inspired by the fast sweeps of the racing track. In the concept car, this is particularly visible at the rear," says Steve Mattin.

The tail lamps, which follow the curve of the rear shoulders, are as advanced as the headlamps up front. When switched off, the lamp panels show no trace of the traditional red or yellow associated with rear lights.

But when activated, the position marker lights, brake lights and turn indicators come on in their correct colours with the help of LED bulbs.

The lighting system’s solid glass panel is sectioned into horizontal "slices" that create the visual impression of a three-dimensional architect drawing when the lights come on.

At the rear there is also a retractable diffuser that adjusts with vehicle speed to give better aerodynamic properties. 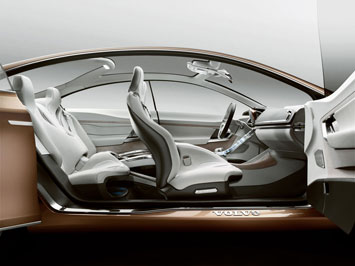 With the interior of the Volvo S60 Concept, Volvo Cars’ design director Steve Mattin and his team are displaying a variety of next-generation ideas.

"You could say that we are showing the road we would like to take in the future. This interior is without doubt the most exclusive we have ever created," says Steve Mattin.

When the parallelogram doors finish their high-tech display, they reveal an interior packed with exciting details, all of which together create a Scandinavian fresh light feeling, full of visual harmony.

In the middle of the four-seater car glitters the jewel in the crown: a floating centre stack crafted from handmade, solid Orrefors crystal.

"It resembles a waterfall that flows down from the instrument panel and then courses along the middle of the car’s interior," says Steve Mattin.

The entire driver’s environment has been designed to provide total overview and control. The driver is backed up by logical instruments, easily accessible controls and sophisticated technology that monitors the surrounding traffic, ready to alert the driver in the event of danger.

The combined instrument is similar in design to the unit in the Volvo XC60 Concept. It resembles a bumble-bee with a round speedometer as the "body" flanked by two digital "wings" providing all the other information. 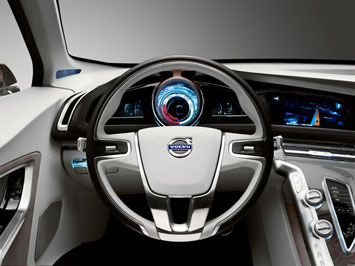 "The speedometer is designed as a three-dimensional glass spiral. The low numbers appear closest to the eye and the figures appear to be increasingly distant as you accelerate. The idea is that the speedometer should provide a visual reminder of the force of the forward motion," explains Steve Mattin.

The combined instrument too has the centre stack’s floating, almost weightless feel about it.

The instrument is built up in several layers. In the gaps between the layers concealed vents contribute to better airflow inside the cabin.

Here too there is a link to the exterior’s "racetrack" theme in the form of the unbroken line around the instrument. A copper frame matches the concept car’s paintwork.

Above the combined instrument, the driver receives information and alerts from the preventive safety systems via the windscreen’s head-up display. Information from the car’s Blind Spot Information System (BLIS) is integrated in the A-pillars. 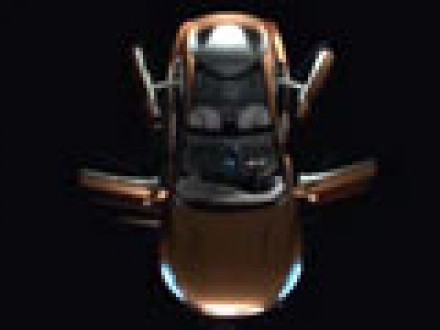 The official video presentation of the S60 Concept, that will be unveiled by Volvo at the 2009 Detroit Motor Show.

Volvo has released the teaser images of the upcoming S60 Concept, that will be unveiled at Detroit 2009 and will give indications on the 2010 production model. Among the design highlights is the 1.6 meters crystal center stack.