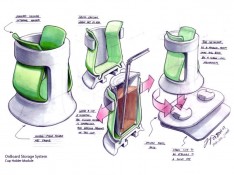 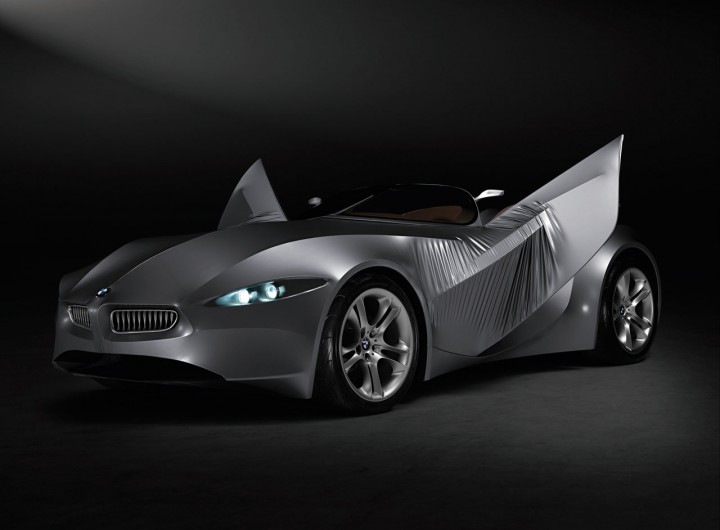 Bmw has unveiled the GINA Light Visionary Model concept, an innovative two-seater roadster that features a flexible and transformable outer skin made of special fabric material stretched across a moveable metal structure. 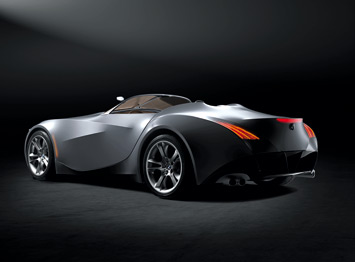 The GINA Light Visionary Model has an almost seamless outer skin, a flexible textile cover that stretches across
a moveable substructure.

Based on the GINA principle (Geometry and Functions In “N” Adaptions), it represents Bmw’s vision of the future and explores new expressions of creative freedom.

The moveable metal structure can be moved by means of electro and electro-hydraulic controls and this will also change the shape of the outer skin, allowing for functional transformations.

These include aerodynamic adjustments (rocker panel and rear spoiler movements), the front headlight contours and the hood central opening for engine service access. 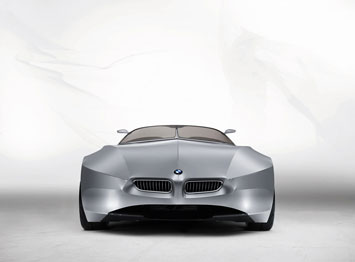 Once the side doors are closed, all the folds in the material disappear and the roadster showcases clean and smooth surfaces.

A bridge between vision and reality
is created by the adoption of a number of Bmw’s typical design elements, including the overall proportions and the sculptural forms.

The car is based on a lightweight aluminum space frame, powered by a V8 unit coupled with rear-wheel drive and rests on 20" alloy wheels in a cross-spoke design with a matt silver finish.

In the rear end, two double tailpipes for the rear exhaust system,
a third brake light integrated into the height-adjustable rear spoiler, an air
splitter at the front and a rear-end diffuser in a carbon design are designed to meet the standards of a production vehicle. 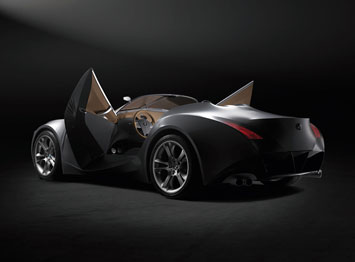 Many of the innovative features will not be developed into production realities. According to BMW, "the GINA Light Visionary Model is
a vision of future cars and serves as an object of research" that shows the brand’s creative potential.

The car’s front and sides, including the doors, create one single uninterrupted, seamless whole that converges to form an optical as well as a structural unit.

"In order to create this appearance, it was necessary to move beyond all previous conceptions of car body configuration, design and materials." 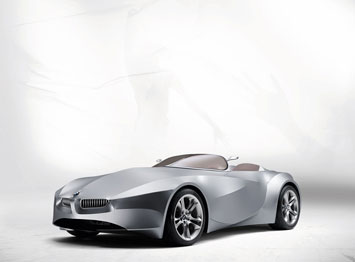 Therefore, the GINA Light Visionary Model has dispensed with the usual body elements found on production vehicles such as front apron, bonnet, side panels, doors, wheel arches, roof, trunk lid and rear deck. Instead, a new structure with a minimum amount of components has taken their place.

This new material offers designers a significantly higher level of freedom
of design and functionality.

The body consists of only four elements. 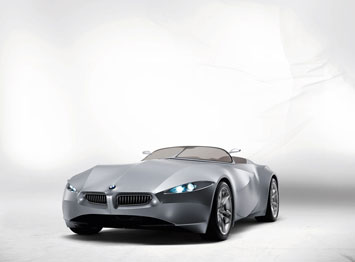 It has a major impact on the interaction between
driver and car and enhances it by offering a variety of entirely new options. Some elements of the substructure are moveable.

The driver can move them by means of electro and electro-hydraulic controls.

This will also change the shape of the outer skin, which can thus be adapted to suit the current situation, the driver’s requirements and can also enhance the car’s functional range. 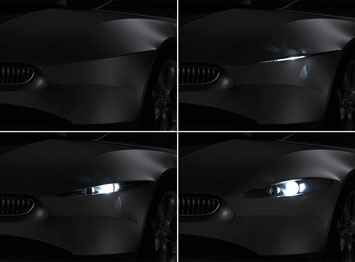 The most striking example of this is the headlight design. In normal position, when the headlights are not active, i.e. when there is no necessity to illuminate the road, they are hidden under the special fabric cover.

As soon as the driver turns on the lights, the contour of the front end changes.

Activated by the
metal structure that lies beneath it, the previously closed fabric cover opens to the right and left of the BMW kidney grille and reveals the BMW double head-lights.

The rear and the rocker panels of the GINA Visionary Model can also adapt both the shape and function to the driving situation in hand. Both can change the shape of their outer skin to meet the driver’s requirement for particularly dynamic motoring. 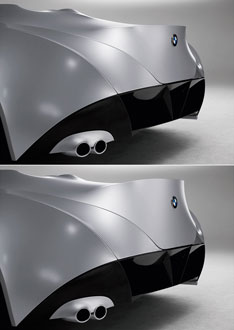 This concept also takes into account a potential interaction with aerodynamic requirements.

The design of the rear element allows for automatic lifting of the rear spoiler when a certain speed is reached, thus creating extra downforce on the rear axle at higher speeds.

Due to the
fact that the entire rear end, including the spoiler, is covered by a single sheet
of material that reaches as far as the rear compartment of the interior, the homogeneous shape of the car’s rear will not be affected by changes to the spoiler position. The mechanical system that moves the elements remains concealed.

The turn indicators and the taillights function without changes to the shape
of the outer skin. Their position, however, is only revealed upon activation. The emitted light shines through the translucent fabric cover, which is permeable
to light but not transparent.

The rocker panels demonstrate the formal versatility of the GINA Light Visionary Model with an equally impressive performance.

The air duct can be optimised
if required. A corresponding movement of the metal structure results in an adjustment of the rocker panel contour to allow for better airflow.

At the same time, an additional protruding rocker panel line emerges. The aerodynamic optimization and the length of the line can be infinitely adapted to the driving situation at hand. 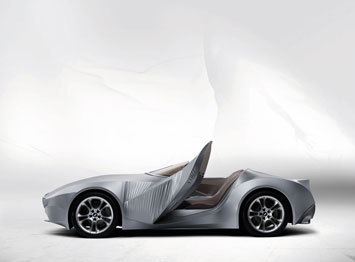 The fact that the body surface is designed by means of a flexible fabric cover that stretches across a metal substructure means that the materials used must
meet exacting requirements.

Industrially produced hybrid fabric made from
a stabilizing mesh netting support and an outer layer that is both water-repellent and resistant to high and low temperatures is suitable for this application.

Another essential material property is a maximum level of dimensional stability.

It must remain dimensionally stable irrespective of the temperature and air humidity it is exposed to even after severe and constant expansion. 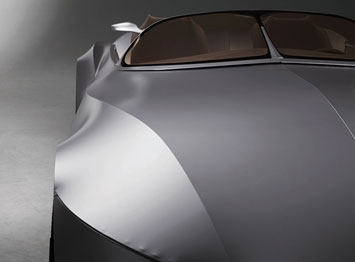 The dimensional stability helps retain the cover’s surface tension for a long period of time. The movement of individual body elements creates accurately reproducible
folds in the material.

In its choice of material BMW Group Design was inspired
by exterior and interior architecture.

The expertise of seat pattern designers working for BMW Group Interior Design was successfully applied in order to cut the fabric webbing to size with maximum precision, determine the strategic position of attachment points and stretch the material.

As a result, the surfaces are remarkably well balanced and due to the steady tension that is retained between any two clearly defined points, the lines are extremely accurate. 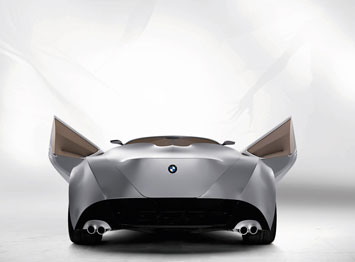 The special fabric is supported by a metal wire structure. At specific points,
the high-strength metal is enhanced by carbon struts with a higher flexibility.

They are used predominantly for round, moving contours with a particularly narrow radius.

The use of large fabric areas and the possibility of changing the surface contours by moving individual parts of the metal mesh that lies beneath it create a new relationship between form and function.

If additional cooling air is required, the BMW kidney grille at the front of the vehicle can be opened.

Because the overall surface of the special fabric covering remains unchanged, the contraction
at the front of the vehicle, which is necessary for functional reasons, has to be compensated for by extra tension in other areas. 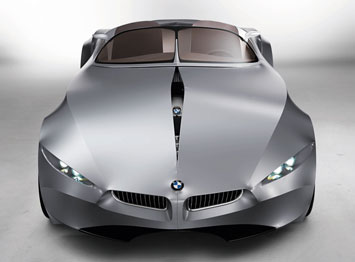 The result is an optically attractive interaction between various body parts that introduces a new dimen-sion to sculptural design. The widening of the kidney grille openings is activated by a movement of the metal mesh in the front area of the side panels.

This creates more tension, which becomes visible by the emergence of an additional character line. The development of this new contour tenses the front of the vehicle: the kidney grille opens up.

The high-precision fit of the material to the metal mesh also allows surface changes without slackening the tension.

In this case, opening of the surface
by moving the respective steel mesh struts creates precisely defined folds in
the material. 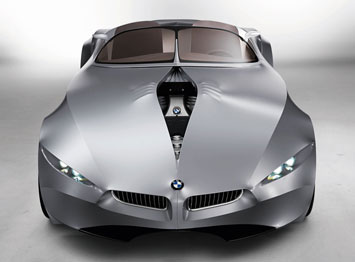 The GINA Light Visionary Model uses this option to display
a function that corresponds to the opening of the hood in conventional vehicles.

The material opens at the centre of the engine cover and can be folded to
the far right and left along an opening line that is approximately 0.5 meters long, to allow the driver or mechanic access to the service points in the engine.

The filler caps of the engine oil, cooling and wiper water tanks are now open
for servicing. Opening and closing is similar to the mechanism on a doctor’s traditional medical bag, where clip-lock fasteners are held together in the middle by a rail.

The effect of the accurate surface material draping is even more impressive when the doors are opened. They swing both outwards and upwards.

The
high number of attachment points for the fabric cover positioned at the front of the car as well as at rear door edges creates a defined and reproducible bulk of material.

The draping is confined to the area between the front door edge and the side panel. Once the doors are closed, the folds disappear completely, leaving a perfectly smooth, stretched material surface. 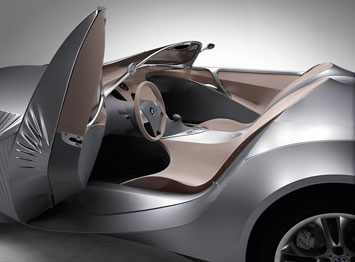 In the interior, the driver can change the appearance of individual car elements. This creates a close interaction between driver and
car in various different situations.

When the car is parked, the steering wheel and the round instruments –
rev counter, speedometer and fuel gauge, which are vertically arranged on the centre console, are in idle position.

This provides the driver with maximum comfort upon entering the car. Likewise, the seat only assumes its optimised functional position and shape if and when the driver sits down on it.

At that point, the headrest, previously firmly integrated into the seat’s backrest, rises up automatically. At the same time, the steering wheel moves towards
the driver and the instrument panel moves in the same direction.

The information on the best driver-specific position of both steering column and seat is stored
in the transducer.

The engine is started by pushing the start/stop button.

The smooth transition of interior and exterior that is typical of BMW convertibles is reinterpreted by the GINA Light Visionary Model.

The fabric that covers
the rear deck runs into the interior and stretches across the driver and front passenger seats.

The same material is also used for the surface design of the door trim and armrests. 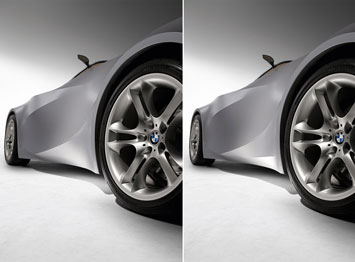 The shift lever in the centre console protrudes from tightly stretched textile bellows.

Driver and front seat passenger look out through a steeply inclined windscreen with the inside rear view mirror integrated into its frame. The side view mirrors are connected to the window frame.

A narrow vertical dividing bar located at the center of the windscreen harks back to the typical windscreen division of traditional roadsters.

Accordingly, the infrastructure used for manufacturing cars that are built in compliance with the GINA principle,
has also changed.

The Rapid Manufacturing method utilized for
this process was first used during the roduction of hoods for the BMW Z4
M Roadster and the BMW Z4 M Coupé.

In these models, the finished
hood has received two distinctive contour lines prior to painting. These are
not produced by a pressing tool but embossed into the metal with pin-point precision by a robot-guided steel pin. 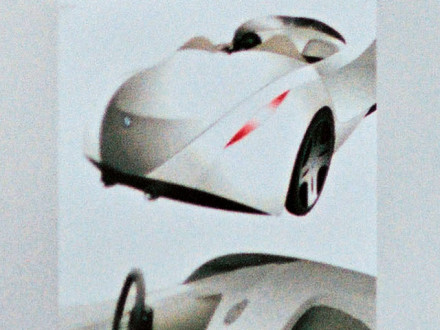 A set of photos from the design and construction process of the Bmw GINA Light Visionary Model and the official document that illustrates the philosophy behind the concept.