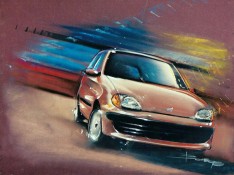 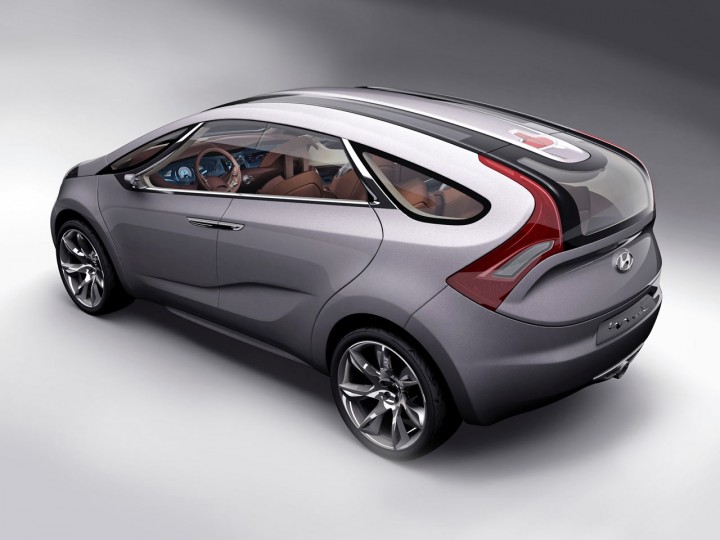 The Hyundai HED-5 “i-mode” concept is a six -seater MPV carrier which previews a future production model and showcases advanced materials and a high-tech interior with a lounge atmosphere and a swivel passenger seat. 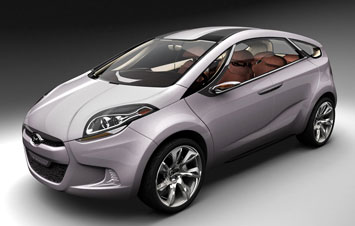 The Hyundai HED-5 "i-mode" concept is powered by a 215-hp 2.2-litre diesel engine with two-stage turbocharging, coupled with a 6-speed automatic gearbox.

Among the main features is the extensive use of advanced materials developed by Bayer MaterialScience AG.

These include self-healing water based bodywork finishes, the new “BayVision” glazing system and Collimator headlight lenses made from Makrolon®, the same material used for the glazing surfaces, enabling the car to have extended transparent areas while reducing the total weight.. 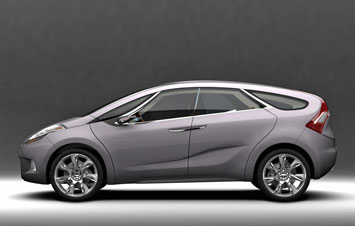 The front end features the hexagonal shaped grill, which symbolises the new brand identity for Europe and demonstrates the consistency in developing a coherent design language.

The cabin can be accesse throuh the special opening system with rer-hinged rear doors and ithout the B-pillar.

The interior features six single seats and gives the impression of a lounge compartment, representing the concept of a social space, where all occupants can travel in comfort, surrounded by sophisticated technology.

This concept is enhanced by the ‘Swivel Seating’ concept, developed by Keiper. 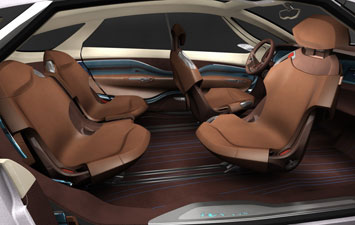 Thanks to the power-operated kinematic system, the first row passenger seat rotates to face second and third row occupants. When the seat is turned, the backrest converts into a comfortable seat surface.

The integrated seatbelt system – another technically advanced debut – and the adjustable headrest maximize passive safety for passengers in either sitting position. The second row bench slides rearwards to increase comfort and create a social area.

The seats are upholstered with "Cognac" leather cushions feature a modern design with a lacquered seat structure that contribute to the "lounge" atmosphere. 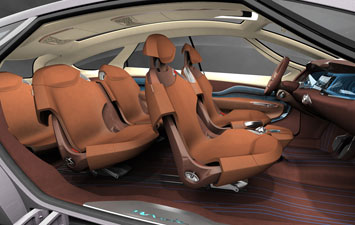 The light beige headliner, which continues through into the pillars, provides the interior with a floodlit, almost roofless panoramic appearance.

The multimedia system developed by LG Electronics offers passengers access to the web, video games, movies or video calling, through the pop-down touch-screen displays and webcams, located within the overhead console.

A wireless network enables a selection of cable-free keyboards, game controllers and headphones to further personalise the entertainment experience.

The R Engine has a power density in excess of 70kw per litre and a low-end torque of 30kg.m, much greater than the the 19kg.m of low-end torque delivered by the standard R Engine.

Mass production of the R Engine is scheduled to begin with the standard (single turbocharged) version in 2009 with the dual-stage turbocharged edition arriving in the first half of 2011. 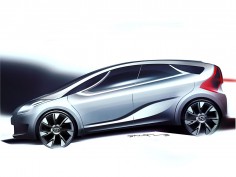 At the 2008 Geneva Motor Show Hyundai will unveil the HED-5 Concept, a six-seater low-emission MPV vehicle that will showcase advanced materials and innovative construction techniques. 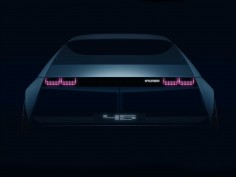 At the 2019 Frankfurt Motor Show Hyundai wil unveil the 45, a fully-electric concept car that will give indication on the company's future EV design. 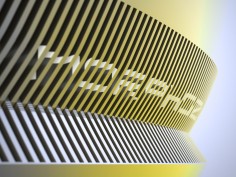