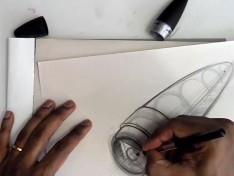 Audi A4: the design 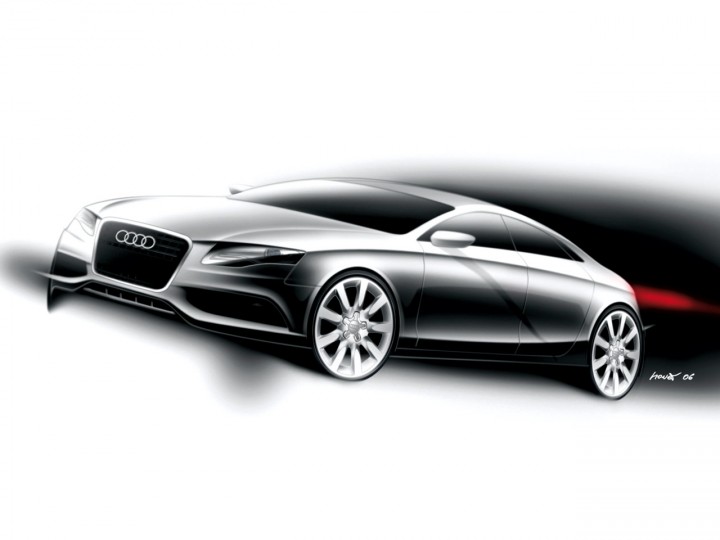 A series of unseen design sketches released by Audi for its latest A4 generation model, reported together with the official information about the exterior design.

Compared with the previous model, the new A4 has clearly grown in size, and has at the same time acquired new, dynamic proportions.

The front body overhang is now shorter, whereas the bonnet and wheelbase are both longer.

These proportions are the key to the visual dynamism of the sportiest saloon on the midsize car market. 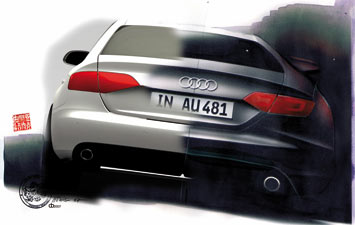 4703 millimetres long, 1826 mm wide, the new Audi A4 exceeds its main competitors in dimensions, though at 1426 mm its height is less than theirs.

The front end, passenger compartment and rear end blend smoothly into one another, and a coupé-style roof line emphasises the flowing silhouette.

The front end features a hood tautly contoured, with bold V-pattern lines extending forward to the nose. In contrast to the previous model the Audi single-frame
grille that dominates this aspect of the car is broader and lower.

The mesh grille is painted Stone Grey or finished in high-gloss Black depending on the model’s powertrain.

The edge of the hood intersects lightly with the tops of the headlights, a device
that suggests determination and is strongly expressive.

The curving lower contour
provides an elegant touch, supported by a subtle fold in the metal.

The headlights are complex elements and – depending on the version – vary in a number of details.

A strong visual impression is made by the “wing” elements in electrodeposited chrome, which differ considerably according to whether halogen or xenon plus headlights are specified.

The daytime running lights are a significant design feature and give the front end of the new Audi A4 an original appearance.

The third of the significant visual elements at the front of the car are the two large air inlets, three-dimensional in shape, with the standard halogen fog lights recessed into them.

Trapezoidal and broadening at the bottom, they emphasise the line of the singleframe grille and also the horizontal features of the car’s nose. A spoiler slightly recessed below the single-frame grille completes the front-end styling.

When seen from the side, the new Audi A4 communicates an impression of taut, forward-striving power, an image of sporty energy enhanced by the long hood.

A typical Audi styling principle is that the body accounts for two thirds of the vehicle’s overall height, with the remaining third consisting of the greenhouse.

The outlines acquire their free-flowing character from the coupé-style silhouette. To prevent the roof, which is quite markedly lowered toward the rear, from reducing rear seat occupants’ headroom, the C-post roots are positioned fairly wide apart on the broad, muscular shoulders of the body. A small spoiler neatly included in the overall outline extends the boot lid visually.

The feature line, inserted at a slight angle in the rear roof area, has the effect of lowering the greenhouse still further. The sides of the body and the roof are joined by a scarcely visible flush seam – a complex technical process that concentrates high precision in both the design and body construction areas.

An important and constantly re-interpreted tool in the Audi designers’ stylistic armoury is the interplay of light and shade, of convex and concave surfaces surrounded by boldly emphasised lines. The tornado line, a hand’s width below the windows, is a striking element in the side view.

This line, sketched in by a sure hand, runs along the front and rear wheel arches; its contour is particularly bold in the centre before tapering away at the ends. As it crosses the front door the tornado line falls gently, dividing the area above the rear wheel in such a way as to avoid any suggestion of unnecessary bulk.

The dynamic line above the door sills, however, pursues a different path: it rises continuously and also extends over the rear end of the car. The sill and the line formed by the lower edge of the windows, on the other hand, are effectively horizontal.

This interplay of lines gives the side view a taut character. Substantial loop-pattern door handles, large wheels and accentuated wheel arches add to the effect of concentrated energy.

The rear end, with a spoiler lip that forms an arc, is drawn in and thus makes the rear wheel arches clearly visible. The slim, horizontally arranged light units taper inwards and create a visual relationship with the road; their reflectors add depth to what the onlooker sees.

A narrow strip at the lower edge for the flasher and reversing light adds a further sense of width at the rear. When the lights are on, the strip-pattern reflectors create a zone of light of limited height.

Dividing the rear light units vertically in the centre enables a wide boot lid to be provided. A recess of generous area is provided for the licence plate above the bumper, which has a boldly flared upper edge of trapezoidal shape that introduces its own sporty note. Below the bumper is a diffuser finished in dark grey.

Cars with a four-cylinder engine have twin exhaust tailpipes on the left; those with a V6 engine have two separate tailpipes, one on each side, with a ground finish. 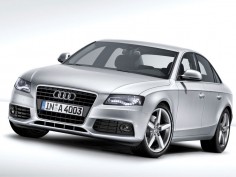 Audi has unveiled the first images of the next generation A4, that will debut at Frankfurt. It features increased dimensions and a design inspired by the A5 coupe.