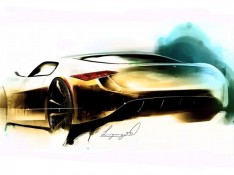 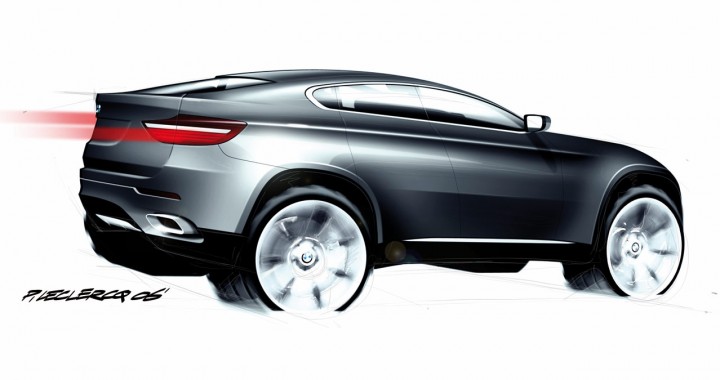 The official images and information about the Bmw Concept X6, the Sport Activity Coupé unveiled at Frankfurt 2007, including a set of photos from the clay model contruction process.

Defined by Bmw as the first "Sports Activity Coupé", the Concept X6 combines a dynamically flowing roofline with the typical features of a BMW X model.

The Concept X6 also showcases the new
Dynamic Performance Control, a drivetrain and chassis control system, combined with BMW’s intelligent xDrive all-wheel drive technology, that offers a high driving stability in every situation, by varying the distribution of drive forces between the wheels.

Below we report an image gallery from the full-scale clay model contruction process and an excerpt from the official press release about the exterior design. 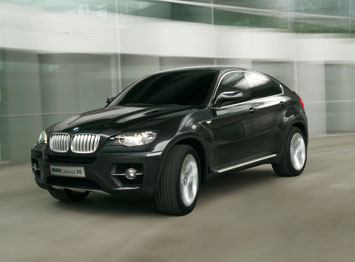 The Bmw Concept X6 combines four doors and a dynamically flowing coupé roofline with a high sill-line, muscular wheel arches, and a strong centre of gravity positioned right in the middle and making a clear reference to four-wheel-drive technology.

The front end is dominated by highlights in design clearly symbolising the car’s dynamic orientation to the road.

From the side, the short front body overhang emphasises the dynamic appearance, the long overhang at the rear, its stretched and sleek look.

The long line of the engine compartment lid merges smoothly and gently into the elegantly rising A-pillars, the greenhouse moved far to the back and the roofline tapering out clearly and consistently from
the B-pillars interacting with the high window line to provide low and, indeed, almost flat window graphics. 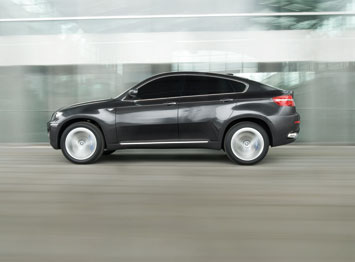 The roofline, in turn, flows down gently to the rear spoiler, finally moving up again slightly in a small upward swing perfecting the overall line of a coupé and at the same time optimising the car’s aerodynamic qualities.

Apart from the high window line, the large wheel arches and the centre of gravity visibly in the middle of the car, the profile is characterized by the interaction of convex and concave surfaces, the muscular side-sills with running boards made of drilled aluminium beneath the doors and the strong underfloor protection elements.

The large air intake scoops positioned far to the outside show a clear orientation, together with the side panels extending far to the inside beyond the headlights, to the wheels, emphasising the car stability.

The outer contours of the dual round headlights units extend far into the side panels, making the front overhang look shorter than it really is and giving the vehicle an even more sporting and dynamic appearance from the side. 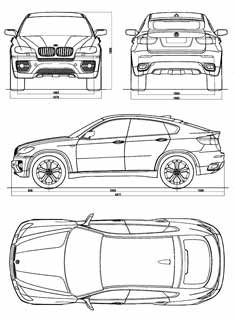 The unique proportions of BMW Concept X6 are particularly clear from the side, the gently tapering roofline and the long body overhang at the rear
giving the car its stretched and sleek coupé silhouette.

The roofline itself reaches its highest point directly behind the steering wheel, highlighting the driver’ position and creating an effect most appropriate for
the extravagant design of BMW Concept X6.

The chrome surrounds on
the side windows is made of one piec while the absence of pillars dividing the side area gives the window graphics a completely homogeneous look making the entire vehicle appear lighter.

The counter-flowing line at the bottom of the D-pillar well-known to the connoisseur as the “Hofmeister kick” stands out clearly towards the rear of the window frame, while slender plastic protection panels at the bottom edge of the bumpers.

The side-walls are split by two contoured lines merging slightly towards one another at the front of the car and thus creating a wedge shape.

The wheel arches are almost square in their contours, and are fitted with 21 inches wheels, with specific Y-spoke design.

The exterior mirrors are made up of two units with a white-glistening strip of lights between the lower unit finished in body colour and the upper
section of the mirror cap made of aluminium. 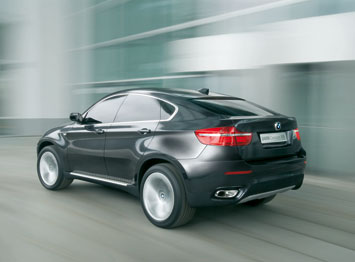 The rear end of BMW Concept X6 features a muscular bumper and the protective underfloor panel, which are classic design elements of a BMW X car.

In addition, the coupé-like proportions are applied with the design language characteristic
of the BMW X-series, with the greenhouse featuring an unusually angled rear window tapering out to the rear.

The entire rear end is split and characterised by horizontal lines making the rear end look even wider and emphasising the car’s powerful stance.

The rear end reaches its full width in the area of the wheel arches, the
two exhaust tailpipes positioned far to the outside and feature a trapezoidal contour that guides the eyes to the wheels.

The distinctive light edge along the lower section of the bumper highlight the ground clearance.

The rear lights, in their design re-interpret the L-shape of BMW’s X models and add a dynamic, sweeping line. Extending far into the side walls, the rear lights again express the full width of the car also through its night design.