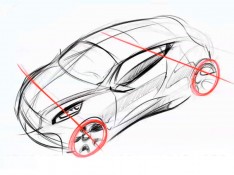 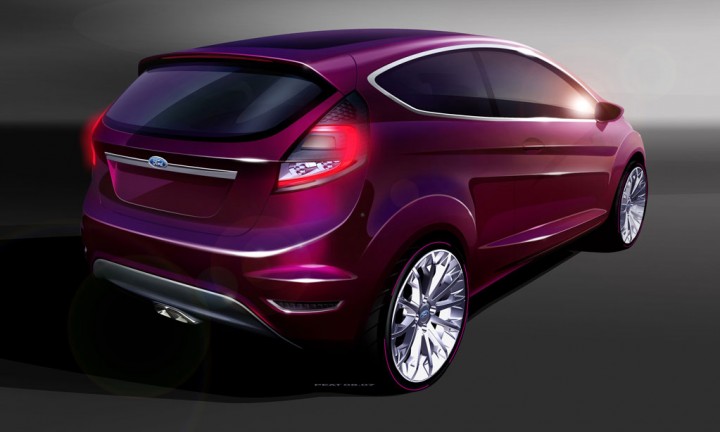 The official set of images released by Ford for its new Verve Concept, including design sketches and photos from the design process. The gallery is completed by the press release that tells the design story of the car. 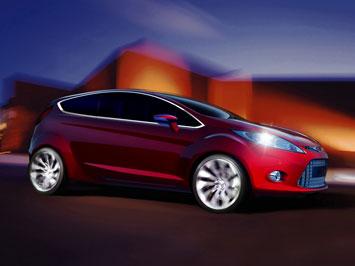 The significance of the Ford Verve Concept is that it’s the first physical evidence of the design direction for an all-new small Ford since it was announced earlier this year that the European arm of the company’s global Product Development group is taking the design and engineering lead in creating a new small-car portfolio for major world markets.

The Ford Verve Concept is the first of three concept vehicles which will debut in key regions – Europe, Asia and North America.

“Ford Verve Concept is presented here in Frankfurt as a bespoke concept car to generate reactions while our production plans are taking shape,” said John Fleming, President and CEO of Ford of Europe.

“Our Design team took an unrestrained approach to how our future small cars could look, and this eye-catching concept was one of the results.

"If we get the reaction we expect, I’m certain that the team will incorporate elements of this advanced design vision into our final production design. This will make the next generation of small cars from Ford very compelling indeed.”

“Ford Verve Concept is clearly our most expressive form language yet,” said Martin Smith, Executive Director of Design for Ford of Europe. 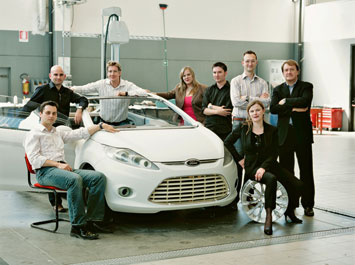 “Bold, even radical, it demonstrates the dynamic possibilities for expressing Ford’s kinetic design philosophy in a small car that is a chic, modern and individualistic statement for a sophisticated, fashion-aware generation.”

Finished in rich colours and distinctive materials inspired by the world of fashion and cosmetics, the Ford Verve Concept was created by a team of designers from Ford’s studios in Dunton, England, and Cologne, Germany.

Building on the kinetic design momentum of Ford’s recent iosis and iosis X concept cars, and the more premium feel of production models like the new Ford Mondeo, the Ford Verve Concept is a bold expression of a small-car vision.

Martin Smith uses expressions like "precision sculpted", "agile muscularity" and "toned athleticism" to describe the full surfaces of its body shape, which are complemented by a sleek roofline and B-pillarless structure that lend an elegant, coupe-like feel of sophistication. 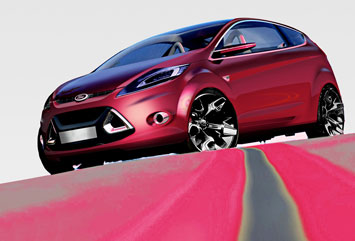 Its colour – a deep magenta red encapsulated in a tinted clearcoat for an even deeper glow – is a daring declaration of individualism and exclusivity.

“We wanted to make a bold statement about our vision for Ford small cars of the future,” said Stefan Lamm, Chief Exterior Designer, Ford of Europe.

“Ford Verve Concept symbolises our ambition to be a leader in small car design and create individual cars for individual customers, just as we have with the S-MAX and new Mondeo.”

Given a wide degree of freedom to create the concept, the design team, including lead exterior designer Chris Hamilton, grounded their efforts in reality. 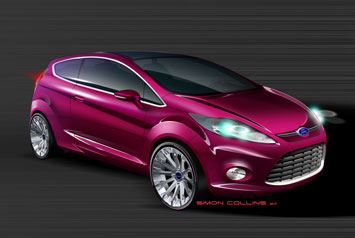 Ford Verve Concept was created with an eye toward production feasibility.

The concept’s face is bold and sporty, yet friendly and engaging.

The front of the vehicle is dominated by a large, inverted trapezoidal lower grille and a large Ford oval badge centred in the compact upper grille opening.

The lower grille features strong horizontal blades punctuated by a regular array of ‘bullet’ shapes that combine to create the visual effect of corresponding vertical bars.

The lower grille and badge treatment are the Design team’s intended signature elements to communicate the Ford design DNA in future products.

The bonnet shape is sculpted dynamically – toned and athletic but not overtly muscular.

This feeling combines with the more pronounced, rearward-stretching headlamp units – inspired by Mondeo – to give the face of the Ford Verve Concept a friendly, open and inviting personality.

From the side view, the concept has the purposeful, cab-forward look of energy in motion.

The profile is emphasised by the pillarless side window shape, the upper contour of which mirrors the body’s curving upper contour line.

This extends rearward from the angular A-pillar to marry the sculpted, semi-high-mounted, LED tail lamps – themselves sculpted to become part of the fullness of the body shape – and the car’s integrated tailgate spoiler.  These elements blend cohesively together and support the vehicle’s panoramic glass roof.

A bodyside belt line adds to the dramatic array of shapes that lend a feeling of controlled tension.  The wheel arches also communicate tension and muscularity – another signature of kinetic design.

At the rear, the lower diffuser with integrated centre exhaust outlet are central elements of a cohesive design that incorporates the encapsulated rear bumper and design accessories, like brushed aluminium accents on the lower edges of the fog lamps.  The lower diffuser is formed of dark chrome, which provides a muted contrast with the deep magenta body colour to create a controlled expression of tension and suspense. 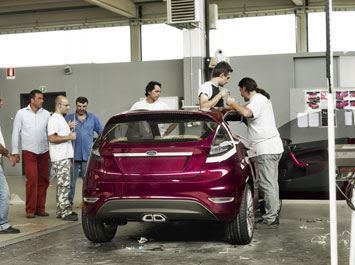 The 18-inch, 12-spoke, two-piece alloy wheel design lends even more drama to the car.  The wheel design is light and airy, with a feeling of depth and ‘three dimensionality’ that draws the eye to the base of the spokes. Ford Verve Concept’s low-profile tyres each feature a sidewall stripe that complements the rich body colour.

Other accents on the vehicle – evoking the way in which carefully selected accessories can complement fashions – include a subtle chrome bar in the door handles and similar use of brushed aluminium on the lower grille surround, the rear number plate surround and on the lower edge of the front fog lamps.

These combine subtly to signal a higher level of premium quality than that typically found in small cars.

“With a small car, for example a B segment car compared with a larger car, we believe we can play up – or amplify – key elements of the kinetic design form language,” Lamm said.

“It’s not just a matter of copy-and-paste from one vehicle segment to another but rather how to interpret the philosophy for each individual car. You can clearly see this when you compare the larger iosis concept, the iosis X crossover and this new project.” 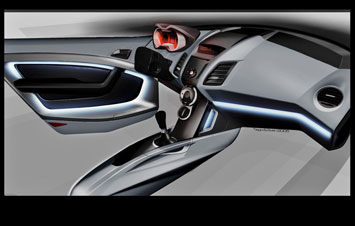 From its boldly shaped surfaces and use of rich colours and original materials, the car interior has a playful sense of sophistication and fashion.

As Ford designers explored the possibilities for a future Ford small car, the wide latitude they were given helped them focus on applying the tenets of kinetic design to the interior of the new concept. 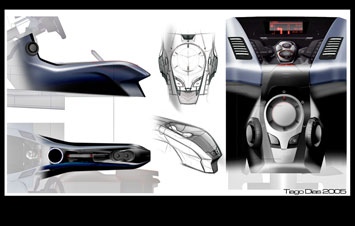 “This type of visual innovation, linking the form language of the interior so strongly with the exterior, is something we believe no other company is doing.”

Full surfaces and flowing contours on interior elements – especially the instrument panel and door panels – reflect the kinetic design elements on the exterior of the vehicle.

These elements combine to create an enveloping feeling for the vehicle’s occupants, contrasting the airiness provided by the panoramic glass roof. 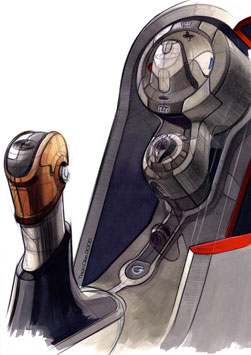 The Ford Verve Concept was designed for the generation that grew up with mobile phones.

Functionally, a key element of the centre stack design is the decoupling of the traditional elements of the entertainment system – the screen, control elements and the electronics.  Separating these elements allowed designers to place controls and buttons for optimal ergonomic positioning in a design that resembles the logic of a mobile phone.

This new approach means that the Ford Verve Concept introduces a completely new aesthetic – a new approach to the form and function of interacting with underlying technologies. The unique architecture also embraces other key systems, including navigation and in-car phone controls.

Every button and switch was crafted with the kind of minute attention to detail that characterises good mobile phone designs.

"A new generation of buyers raised with mobile electronic devices would feel right at home in this new automotive interior, one that exceeds the standards typical in the small-car segment," said Vidakovic.

The concept’s heating/ventilation controls, highlighted in a lozenge shape at the midpoint of the centre stack, feature large twist dials which were inspired by the sculpture found in high quality power showers.

The centre stack structure flows into a centre console, which provides stowage areas, including a tray for a mobile phone or MP3 player as well as a large bin for a purse or shoulder bag near the handbrake.

“The centre stack is like the art gallery of the car,” Vidakovic said. “The combination of the sculpture of the upper instrument panel, the rich interior colours and materials and the jewellery-like brightwork is very distinctive.”

The primary gauges – speedometer and rev counter – are uniquely framed by binocular-shaped, short tunnels of brightwork which complement the centre stack and contrast the rich interior colours like a fashion accessory.

Ford Verve Concept’s steering wheel is another work of sculpture. Its crash pad, sculpted of soft-feel material and framed in brightwork, provides a rich tactile and visual centrepiece for the Ford oval badge. The left and right spokes of the three-spoke design incorporate the toggle controls for the HMI system.

From the instrument panel to the seats, the Ford Verve Concept is trimmed elegantly in a harmonious blend of magentas. Materials were inspired by the exclusive fabrics and leathers of haute couture, according to Ruth Pauli, Chief Designer, Colours and Trims, Ford of Europe.

“Colour plays an important role in emotionalising our products,” Pauli said. “With Ford Verve Concept, we are striving for a very precise expression of a certain style.  Expressive colours in the right harmonies and contrasts.  Soft yet intense. Good materials like glove-leather that’s beautiful to touch. These details are helping us bring a feeling of premiumness into the volume small car world.”

The harmonies and contrasts of the concept are distinctive.  The portfolio of materials used by Pauli, colour and trim specialist Ulrike Dahm and other members of the Ford Design Europe team include:

Small elements of the interior – even control stalks on the steering column – reflect an attention to detail from the team inspired by the packaging of luxury cosmetics, which often incorporate sophisticated, expensive-looking details to convey brand appeal.  Such small packaging requires the precise execution of every detail and the right expression, tonal quality and saturation of colours.

“Together, these elements combine to create a strong statement of consistency, harmony and quality that makes the Ford Verve Concept such a cohesive design statement,” Pauli said.  “It is this cohesiveness that will make this concept appeal to a modern, fashion-aware audience.”

As product development of a new generation of Ford small cars continues behind the scenes, Ford of Europe is hoping to gauge public reaction to the Ford Verve Concept during the Frankfurt Motor Show.

European design chief Martin Smith said this and other opportunities in the near future for public feedback will be important drivers of the ultimate Ford small-car design direction.

“The Ford Verve Concept is a dynamic first public expression directionally of some of the thinking that will be contributing to the design DNA of our next-generation products.  At this stage, we have had the freedom to be radically innovative, but I’m confident about the realistic possibilities for kinetic design to embrace this segment of vehicles.” 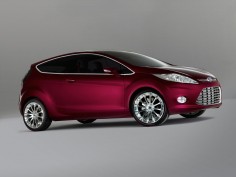 Ford of Europe has unveiled the Verve Concept, a sporty compact vehicle that makes use of the latest evolution of the kinetic design language and provides hints on future compact models. It will debut at the Frankfurt Motor Show.