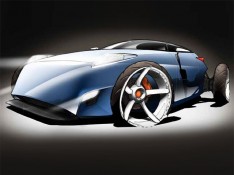 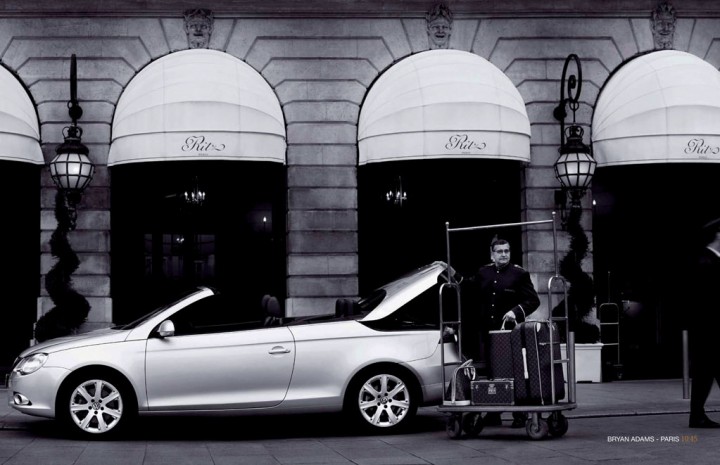 The new VW Eos is the protagonist of a series of artistic pictures created by five world-class fashion photographers for the international zeitgeist magazine ZOO.

Alongside its launch, the Eos is also
making a debut in photographic art. No sooner had Canadian singer
Bryan Adams picked up the prestigious Lead Award of the German
marketing and media scene for his photo shoot with US rebel actor
Mickey Rourke, than he had set his sights on a very special model:
the Eos convertible coupé from Volkswagen. 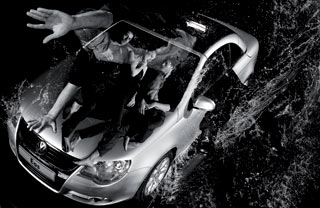 VW Eos by Philippe Cometti The idea was born at a breakfast attended by representatives of
Volkswagen and the magazine ZOO, which has been running for three
years and is published by Bryan Adams.

In search of ways of depicting
the Eos that were out of the ordinary, the magazine’s editor in chief
Sandor Lubbe suggested photographs by internationally renowned
fashion photographers.

"We gave the photographers completely free hand. It is obviously risky to
put a vehicle that is not yet established on the market in the hands of
artists.

"As you know, there are no limits to what modern art is capable of.
But nothing ventured, nothing gained" said Emanuela Wilm, Head of
Lifestyle Communications at Volkswagen, commenting on the enterprise.

And so the Eos has been photographed by Frenchman Philippe Cometti,
Americans Nicolas Moore, Tom Fowlks, and Alexei Hay, and by Bryan
Adams himself, sometimes in highly unusual settings. 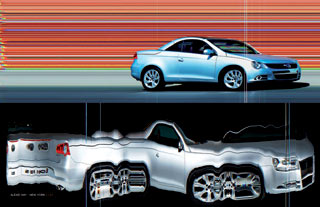 VW Eos by Alexei Hay The chosen scenes
were in Los Angeles, New York and Paris.

Philippe Cometti, who had already photographed campaigns for the
fashion designers Givenchy, Armani and Hermès, saw the challenge in
how to convey the youth and energy of the car.

Alexei Hay, also known for
his photo shoots for GQ, Dutch and the fashion label Gucci, based his
work on a picture by the French photographer Jacques-Henri Lartigue and
sought to capture the instant of motion with sophisticated camera
technology.

The experienced Vogue and GQ photographer Nicolas Moore chose Sunset Boulevard in Hollywood as the background for his
photograph, since Los Angeles is “sexy, glamorous and always sunny”.

The winter sports photographer Tom Fowlkes chose a setting from "Terminator II" to express the "joy of driving" in his photograph.

And Bryan
Adams wanted to associate "the Eos with already established brands
such as the prestigious Hotel Ritz in Paris and the luggage by Louis
Vuitton.“

"Volkswagen’s openness played a major role in the success of the
project“, said Lubbe.

"With both, fashion and cars, people can make a
statement, underline their personality. Both have aesthetics and design as
Page 2 of 2 Nr. 201/2006 Volkswagen AG
a topic. ZOO magazine offered the optimum platform to join both themes
in a high-value context. That is something we are obviously proud of.“

The photographs are being published over twelve pages in the June issue
of ZOO magazine. ZOO is one of leading magazines for fashion and
design and publishes four issues per year.