Acura will unveil a concept version of the next generation MDX SUV model at the next New York International Auto Show. Like the previous model, the new MDX will be designed, developed and manufactured exclusively in North America.

Celebrating its 20th anniversary as a brand, Acura announced plans to debut a concept version of the all-new MDX luxury sport-utility vehicle, April 12, at the New York International Auto Show and released an artist’s rendering of the new vehicle. Scheduled to debut later this year, the 2007 Acura MDX will be the second generation of Acura’s luxury SUV to be designed, developed and manufactured exclusively in North America.

“The 2007 MDX will speak clearly to the advanced image of Acura and promises to put MDX solidly at the front of the pack with a striking new image, new technology and performance unmatched in the segment,” said Dick Colliver, executive vice president of American Honda Motor Co., Inc. “The designers and engineers working on this new MDX have a tremendous passion for this product that will be evident in all aspects of its design and performance.”

The company made the announcement on the 20th anniversary of its creation as the first Japanese luxury nameplate. “The pioneering spirit that gave birth to Acura two decades ago is driving our continued advancement and innovative approach to luxury,” said Colliver. “Acura is twenty years young today – stronger, faster, more nimble and more on the cutting edge of automotive design and technology than at any time in its 20-year history.”

In 2006, Acura will introduce two all-new models – the 2007 Acura MDX and the completely new RDX premium entry SUV. Equipped with an innovative new 2.3-liter turbocharged engine and Super Handling All-Wheel Drive, the RDX combines sport-utility function with sports sedan handling and performance. The RDX will launch this summer as a 2007 model.

The company also celebrated the groundbreaking for a new Acura-exclusive design facility – the Acura Design Center – scheduled to open in the summer of 2007. This new facility, located at the company’s Torrance, California, headquarters will play a critical role in the research and design of future Acura products and will serve to ensure that Acura continues to produce distinctive designs that communicate the advanced style, performance and character of Acura. 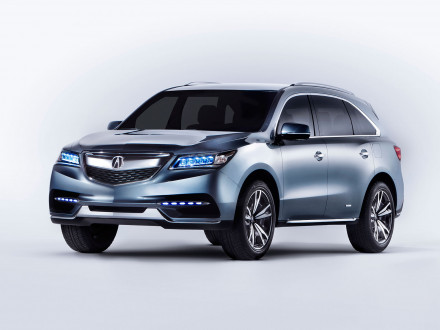 Presented at the 2013 Detroit Motor Show, the Acura 2014 MDX Concept previews the design direction for the third generation MDX luxury SUV, that will be launched by mid-2013.