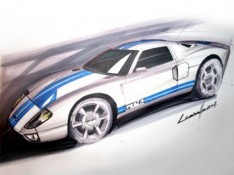 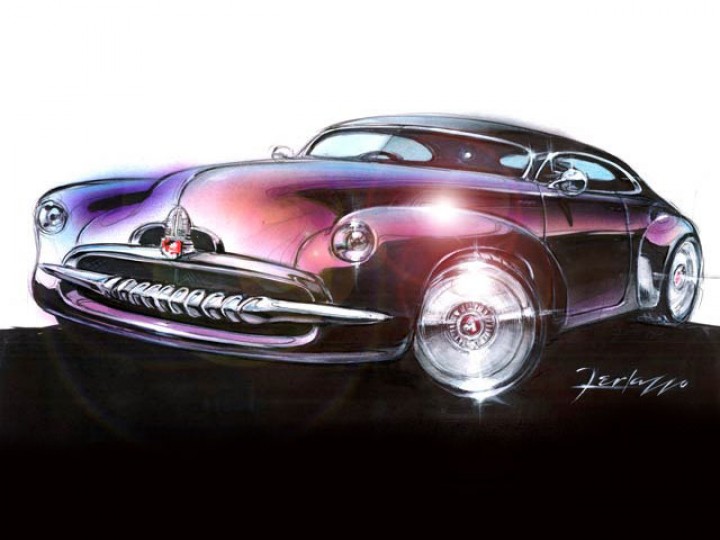 At the Australian International Motor Show in Sydney Holden presents the EFIJY concept, a modern hot rod interpretation inspired by one of Australia’s most famous car, the Holden FJ.

EFIJY is a radical pillarless custom coupe boasting V8 Supercar power under the bonnet and based on Chevrolet Corvette underbody.

The ‘Soprano Purple’ paintwork highlights its curvaceous 5.2-metre body, reinterpreting the classic design cues of the iconic 1953 FJ Holden. It delivers retro, mumbo and gizmos in one glorious package.

Obviously not intended for production, EFIJY has been a passionate side project for some Holden Design team members otherwise dedicated to creating the all-new 2006 Commodore.

A long-term dream for Chief Designer Richard Ferlazzo, EFIJY brought together almost 20 suppliers to highlight the latest in mechanical, electronic and material products and ideas.

Mr Mooney said the project was developed as a collaboration with suppliers which reduced impact on the company’s heavy work schedule and ensured the highest possible quality result for the showcar.

“EFIJY is all about fun, emotion and imagination. It shows what a bunch of clever and talented design people can do when they are let loose to create something really wild,” Mr Mooney said.

“This year was a fantastic opportunity for us to create something which highlights our designers’ ability and versatility.

“EFIJY is sure to evoke different memories for everyone who sees it. People might focus on the FJ links, the glorious custom coupes of the 1930s or the great design flair of the 1950s.”

“Invariably, people smile when they see it for the first time. EFIJY is our accolade to the talented designers who cut loose with some fantastically flamboyant styling in the post-war 1940s and 1950s,” Ferlazzo said.

“Ask the question, ‘what would these people have created using all the skill sets and technology we have now’, and EFIJY might be the all-Australian answer to that question.

“EFIJY is also aimed at the legions of custom car and hot rod enthusiasts out there whose appetites aren’t generally met in the concept car arena.

“Most importantly, it sends the message that the same people who have sensible day jobs designing entirely practical cars have the passion and inspiration to create something as outrageous as EFIJY.

“We’re all car nuts together and the fact that EFIJY stands on our Sydney motorshow stand goes some way to legitimising this form of automotive design in the mainstream.”

The design team has cleverly incorporated FJ design cues into EFIJY’s radicalcustom coupe body, acknowledging the most important aspects of the iconic 1953 release.

The Corvette rolling chassis was lengthened to accommodate the EFIJY body, which is more than 700 millimetres longer than the FJ by which it was inspired.

All brightwork on the vehicle is hand-made billet aluminium to maximise its authentic look, nowhere more evident than the stunning grill salute to FJ’s distinctive front.

The drop-down, touch control LCD screen and an instrument cluster glowing with the number ‘53’– another FJ gesture – are set in the body-coloured metal dash and pulsate with a radiogram retro orange glow.

There are pearlescent, Bakelite-look push button controls for the electronic automatic transmission and the hard curved floor is finished in figured maple timber veneer with aluminium inserts.

EFIJY’s prowling appearance can be accentuated by the air-adjustable suspension. At the touch an LCD screen, At a touch of the LCD screen, EFIJY can hunker down to just 27 millimetres from the ground or rise to a more practical drive height.

The use of LED headlights and tail lights is accompanied by liberal LED applications inside the vehicle, including courtesy lamps and sill plate illumination lamps. Several are dual filament, allowing them to throw different colors depending on the application.

Like any great showcar, EFIJY is stocked with a cutting edge entertainment system featuring hard drive audio and video storage driven through a major amplifier and speaker setup.

The 6.0-litre LS2 V8 engine has been supercharged and modified by Ron Harrop, well known throughout the Australian automotive and motorsport industry and an ex-FJ Holden racer.

The power output is transferred to massive 22-inch by 10-inch billet aluminium wheels with fluting which echoes the FJ’s more modest original 15-inch by 4-inch wheels. Reflecting its street sled heritage, the front wheels are 20-inch by 9-inch.

Advanced designs for EFIJY were prepared during 2003, the 50 th anniversary of the original FJ release. Clay models were prepared but plans were shelved to make way for other stunning concept cars such as last year’s Torana TT36.

The project was finally approved early this year for the 2005 Australian International Motor Show in Sydney. This gave the team eight months to bring like-minded suppliers on board and complete the EFIJY build in a way which greatly reduced costs compared with most showcars.

“EFIJY has been a real labor of love for everyone involved and it shows in the way it feels. It gave us a unique opportunity to showcase Holden’s creative abilities, and those of some of our key partners, in a way which will appeal to a broader audience,” Ferlazzo said.

“It’s been a long road to bring this to reality and the perfect time to do it before we pull the covers off our new Commodore range. We’re pretty sure that an Australian motor show has never seen anything like EFIJY from a local carmaker before.”

Holden Design plans to show the car at a series of street machine and hot rod shows around Australia after its Australian International Motor Show debut. 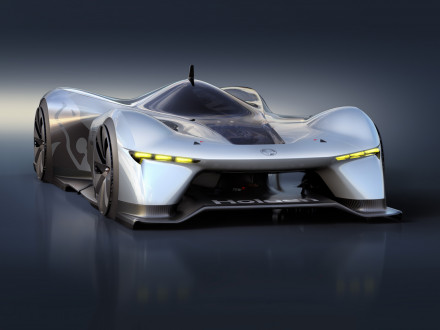