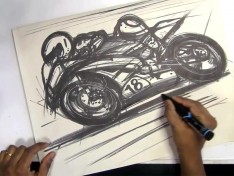 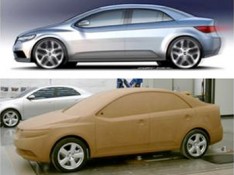 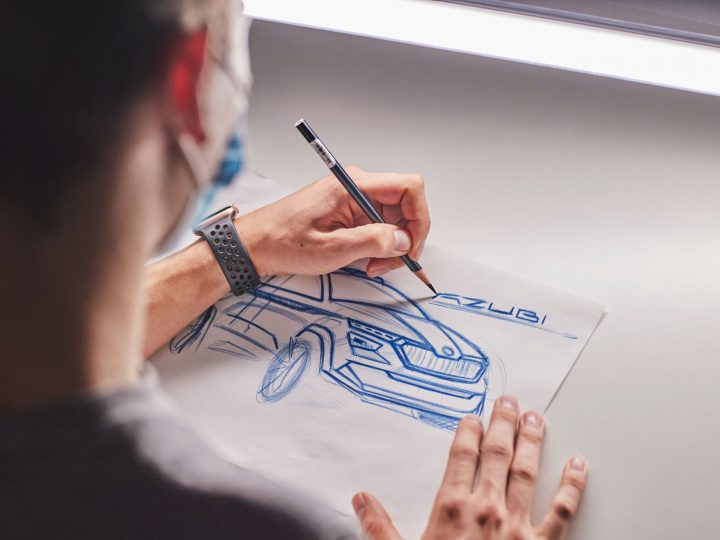 This year, students of the Škoda apprentice car (or Azubi) programme are collaborating with Škoda Motorsport to build a one-off special helping celebrate 120 years since the company’s entry into competitive motorsport.

The eighth project will see the transformation of a a road-going Kamiq compact SUV into an off-road racer tough enough to tackle events like the legendary Dakar Rally. 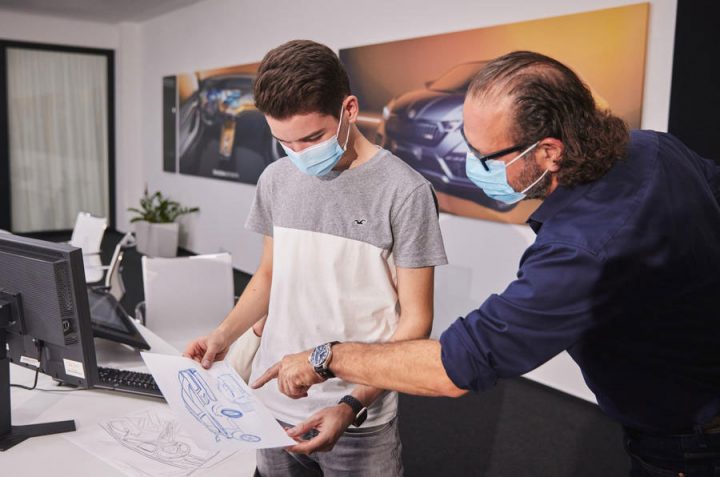 The exterior and interior sketches shown by the 25-students team reveal a dynamic design which, in addition to providing a great experience for the students, also marks another celebration of Škoda Motorsport’s 120th anniversary and stands as a tribute to the Czech brand’s storied racing success. 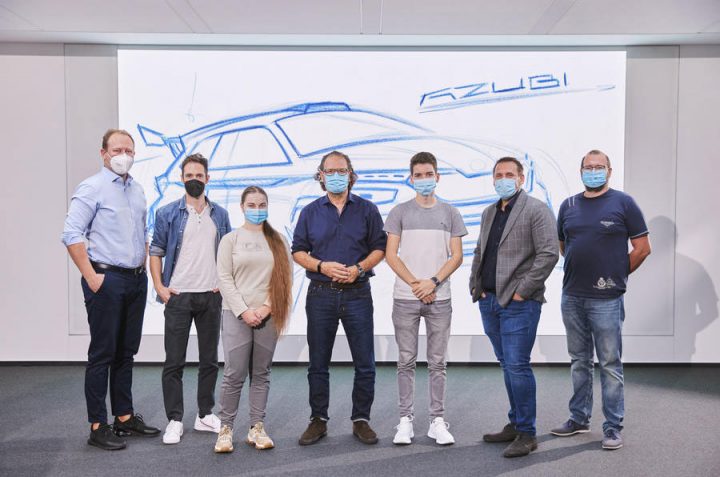 Production of the recent Azubi cars began in 2014 with the CitiJet, a two-seater version of the CitiGo. This has been followed by the likes of the Element, which paid homage to the Škoda Buggy 736 of 1973, the Mountiaq, a rugged Kodiaq-based pick-up and the Sunroq, a convertible edition of the Škoda Karoq. 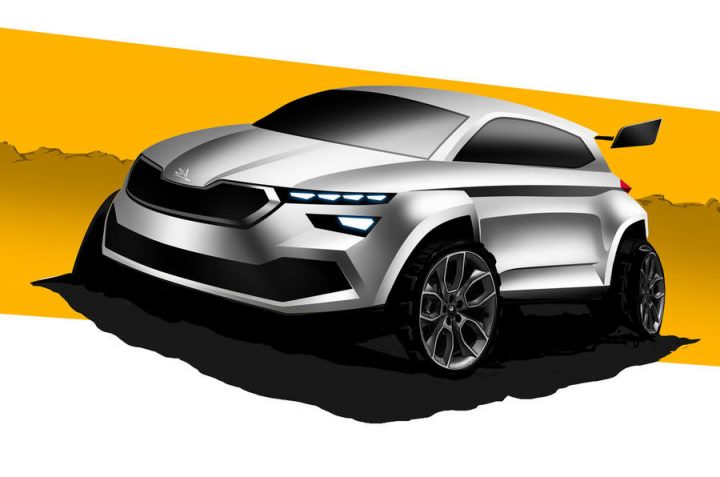 About the Azubi car programme

The current Azubi car programme was inspired by a series of 1970s projects where apprentices often worked out of hours to create special one-off cars. While few were ever officially documented in the way they are now, the philosophy of empowering apprentices to create fully driveable concept cars is at the heart of the modern-era Azubi project. 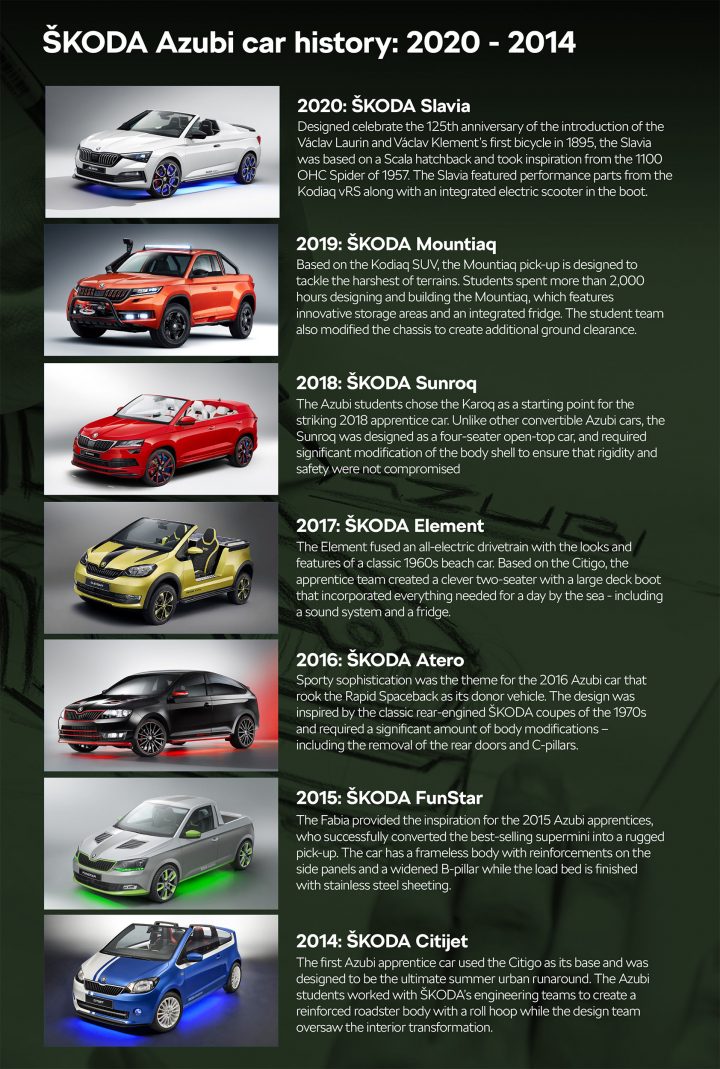 Although the final Azubi cars have taken many forms over the years, the project brief has remained the same. Every year, a team of around 30 apprentices from the Škoda Academy and the Škoda AUTO Secondary Vocational School of Engineering are challenged to create their dream car, based on an existing Škoda production model. The apprentices are required to design the car and build a fully working prototype that can be driven. During the process the team has full access to the brand’s advanced CAD and prototyping systems at Mlada Boleslav and call on the expertise and advice of Škoda’s design and engineering teams. However, final construction is always carried out by the students. All designs go through the same sign-off process as Škoda’s production cars.

Today, each successful student of the 13 different technical courses it provides is offered employment at Škoda. In 2013, the school became part of the Škoda Academy and established a new annual tradition in the form of the Azubi Student Car project, enabling young talent to learn from Škoda’s professionals as they design and build an original vehicle themselves.

Experienced employees from other departments, such as design, technical development and production frequently work with the young students to help them realise their vision. 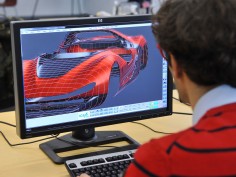 Are you already designing in 3D? If not, this is a list of 10 reasons why should probably consider learning some 3D skills - and thanks to the available software and training, today is the best time ever to start. 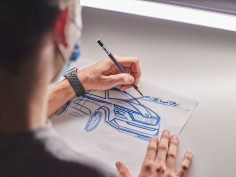 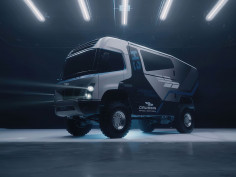