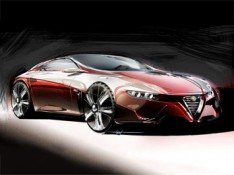 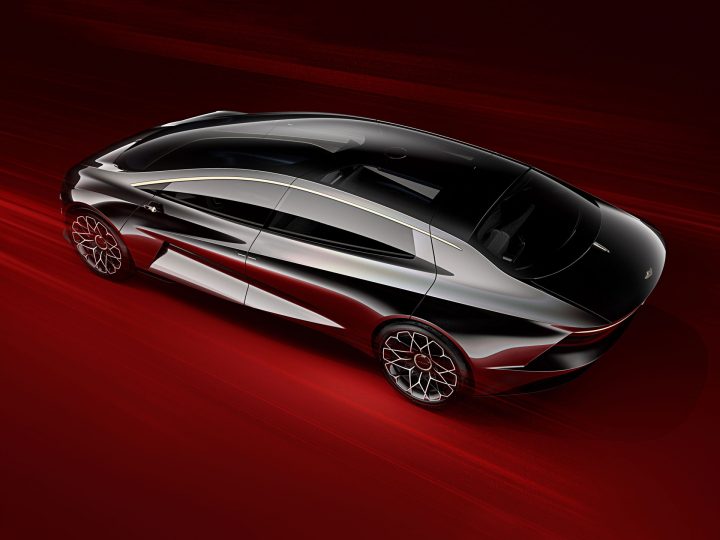 The Vision Concept revealed in Geneva is defined as “a near future study that previews the design language that could potentially be seen in production Lagonda models”. 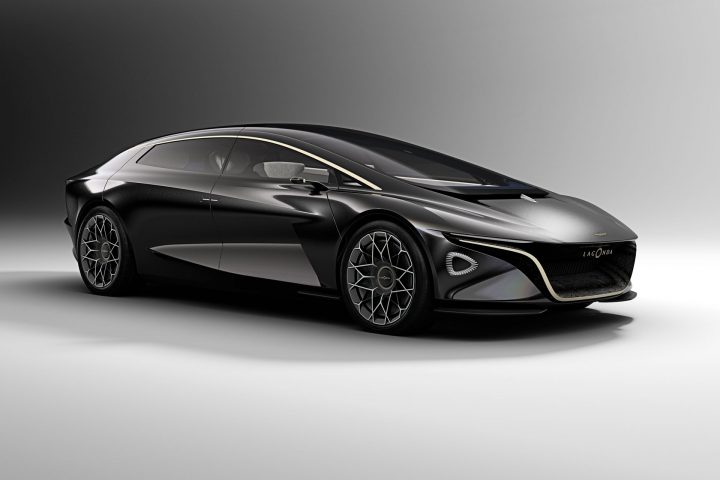 Alongside the new concept, two 40 per cent scale models are on display: one coupe concept and one SUV concept,illustrating how the Lagonda design language could be adapted for the future. 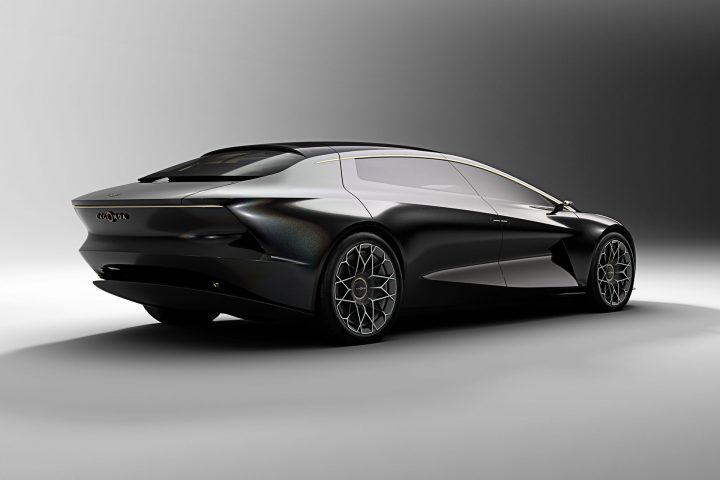 Some of the distintive design elements, in particular the rear end, recall the iconic, sharp shapes of the 1976 Lagonda sedan.

Compared to the Aston Martin’s organic design DNA, the design direction chosen for Lagonda is more “sculptural, shocking and challenging”. 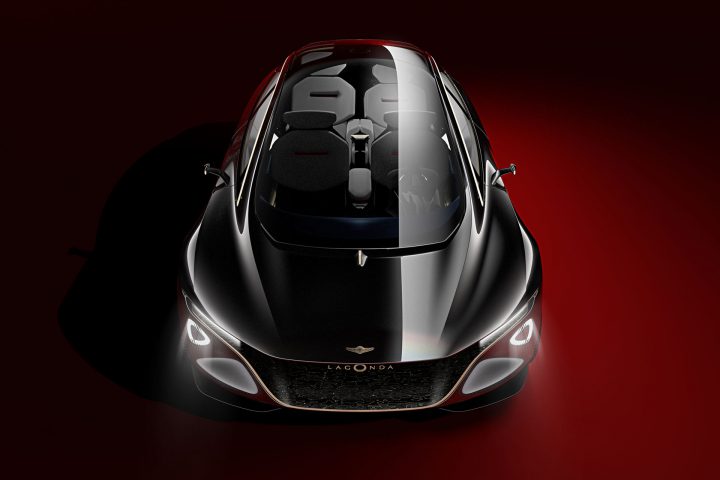 The use of non-traditional powertrains allowed to create achieve a high level of space efficiency while maintaining the overall length and height lower than those typical of limousines. 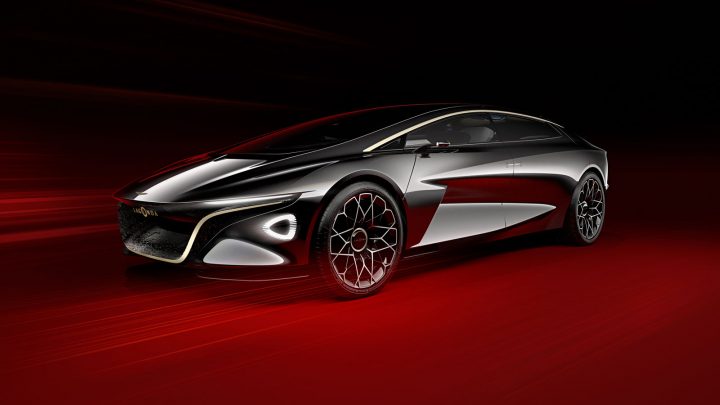 ‘The Lagonda Vision Concept is an incredibly bold design statement,’ said Aston Martin EVP and Chief Creative Officer, Marek Reichman. ‘Lagonda has no need to occupy a huge amount of road space or make an ostentatious wealth statement. It is like comparing Concorde to the first class cabin of a conventional airliner. By ditching traditional architecture like Parthenon grilles and massive frontal areas, and by using electrical power, Lagonda design can still be distinctive and luxurious without being grandiose. It offers its customers a thoroughly modern, emission-free form of super-luxurious mobility.’ 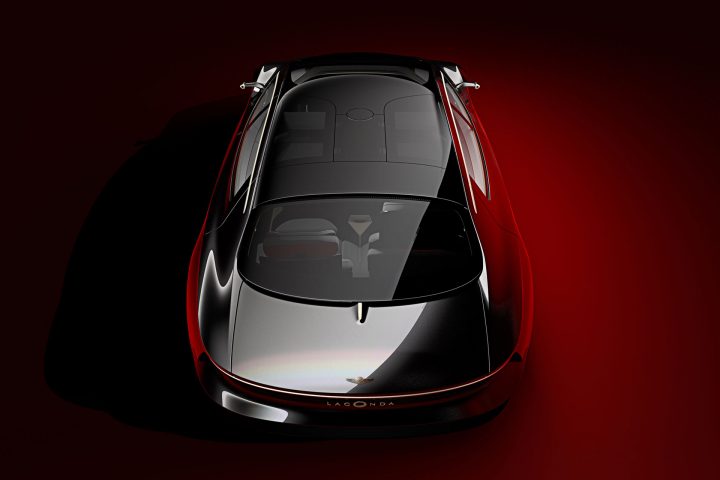 ‘The shape of the Lagonda Vision Concept is the result of satisfying a number of different requirements,’ says Reichman. 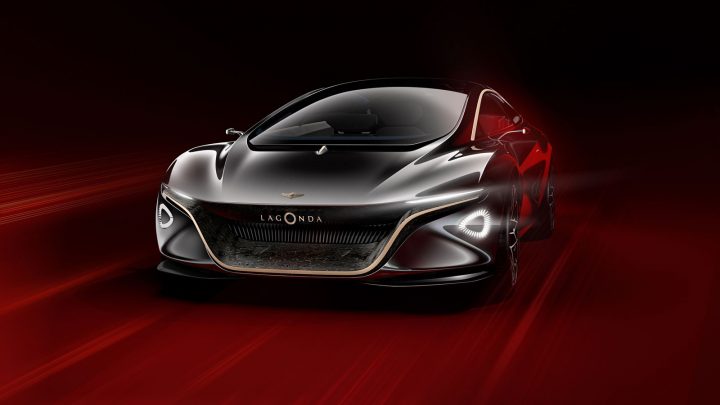 ‘The need to make a bold design statement, to establish Lagonda as a company of the future and to show how technological advancement can help liberate design too. So while Aston Martin design language can be seen as organic and natural, that of Lagonda is more sculptural, shocking and challenging. It is a shape formed by the collision of invisible forces, like those made by magnetic particles in an electrical current. The secret is to understand how to connect that shock and change to beautiful surfacing.’

The work of renowned British craftsman David Snowdon, has fascinated Reichman for years. His ability to marry materials, some very modern, others very established in ways that are never predictable held the key to the interior of the Lagonda Vision Concept.

‘How do you create a cabin that is at once unlike any other, capable of achieving a new level of luxury both in look and feel while staying true to Lagonda’s forward thinking vision? For me there was only one man for the job.’ 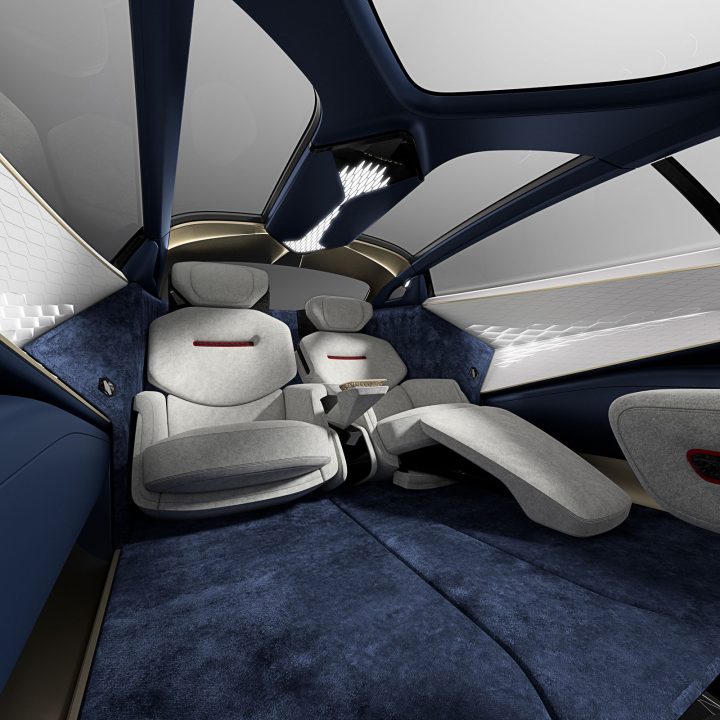 The spacious cabin can accomodate four adults, each of two meters height or more 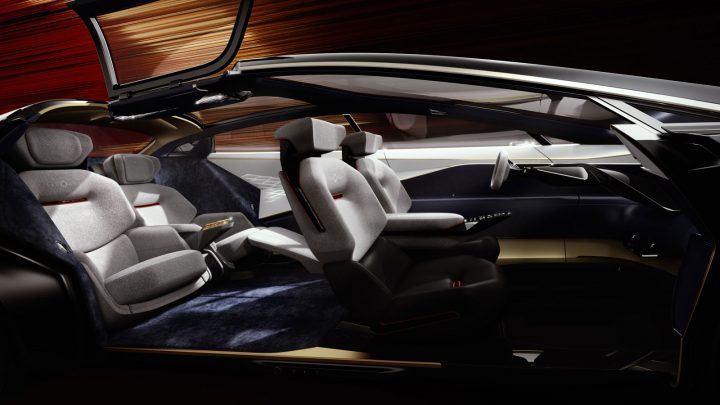 Leveraging the electric architecture, the Lagonda Vision Concept was designed from the inside out. 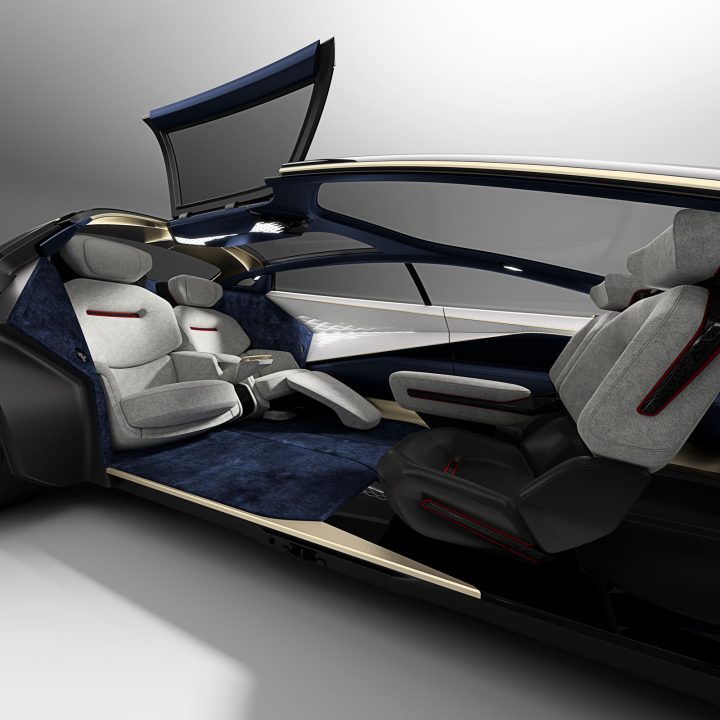 ‘When we first started working with David we showed him all these ideas we’d had for marquetry and leather on the inside and he said, “Let’s use different materials, materials people won’t expect even in isolation, let alone together.” Which is why the interior of the Lagonda Vision Concept uses not only ultra modern materials like carbon fibre and ceramics but also some of the oldest and finest that of late have rarely been used in the automotive sphere, like cashmeres and silks.’ 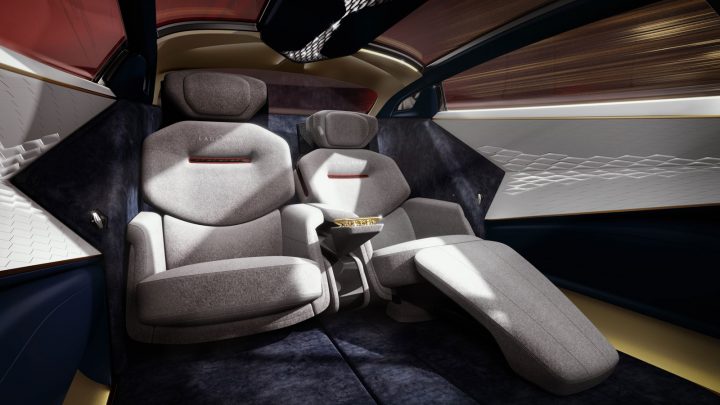 The result is a cabin that surprises, shocks and fascinates, where silk carpets and hand woven wool upholstery live in perfect harmony with carbon fibre trim and functional ceramic tiles that open and close to alter the ventilation and adjust the volume of the music. 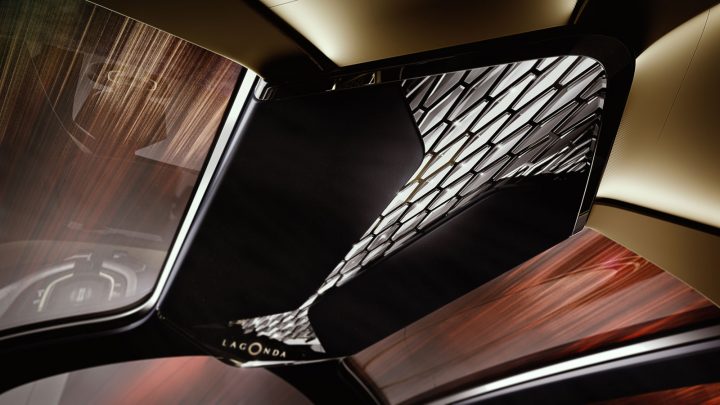 As well as working with David Linley, Marek enlisted the support of Savile Row tailors, Henry Poole for their expert knowledge in tailoring luxury materials. When the decision was made to use hand woven wool the master tailors of Henry Poole were able to assist in creating the patterns, cutting the material and the detailed finishing to ensure that a perfectly trimmed seat was achieved on the Lagonda ‘Vision Concept’. 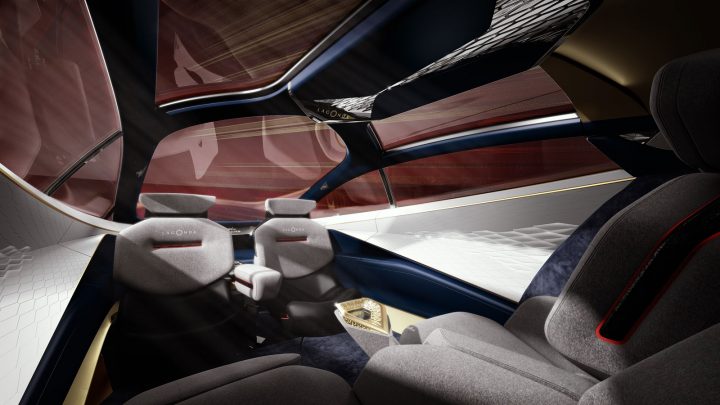 Its design also means a new level of convenience and ease of use can be delivered. Because the majority of the car’s structural strength comes through its floor, it has been possible to use apertures in the body far larger than would be wise in conventional cars.

As a result, the rear hinged back doors don’t just open outwards, the roof sections also open upwards to provide unprecedented ease of access. Occupants can therefore literally stand up inside and walk out of the car, or step straight into it.

Similarly, the front seats are not mounted on conventional runners which always interfere with where those in the back would like to place their feet, but instead sit on cantilevered arms extending from the floor outside the seat frame providing a completely uncluttered floor area. And the seats are more like armchairs, with heavily bolstered arms because, given the choice people always use arms to lower and raise themselves from chairs.

The Lagonda Vision Concept also anticipates a world with a high level of autonomy. Its design is commensurate with level four autonomous driving, meaning the car is capable of driving itself in all routine circumstances and on all recognisable roads.

As a result, the steering wheel can not only move from left to right hand drive according to need, in autonomous mode it can also retract entirely allowing front seat passengers to rotate through 180 degrees to engage in face to face conversation with those in the back. 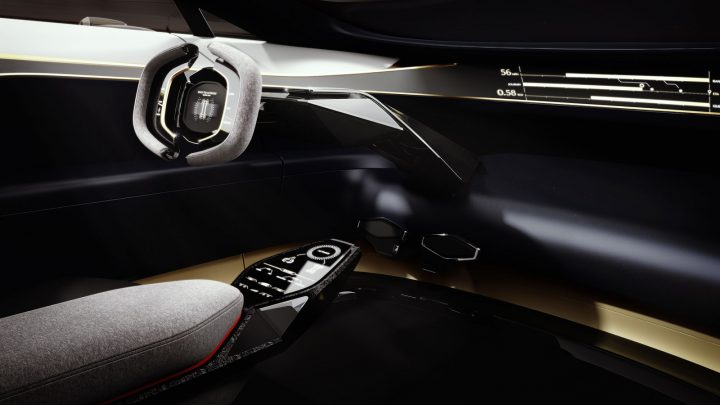 In the meantime, the car will not only have 360-degree awareness of the world around it, but also be fully connected to it, allowing occupants unprecedented access to bespoke concierge services and a level of connectivity and cyber-security few enjoy in their own homes, let along their cars.

The Lagonda Vision Concept has been configured to accept powerful solid state electric batteries enabling it to cover up to 400 real world miles between charges. The concept has also has been designed to be compatible with the latest wireless conductive charging technology.

The car itself makes full use of Aston Martin’s experience in multi-material bonding techniques, creating a structure that it at once supremely light for an all-electric luxury car, structurally stiff and, as we have seen incredibly space efficient. It will also make the most of its electric drive system to provide intelligent all-wheel drive, capable of delivering anything from 100 to zero per cent of available torque to any given wheel according to demand. 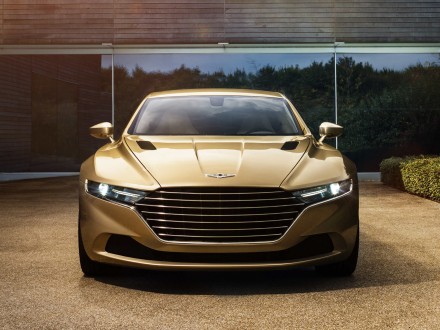 Aston Martin Lagonda Taraf to be sold outside Middle East

Aston Martin has confirmed that the new Lagonda, presented in late 2014, will be also available to a limited number of customers around the world.