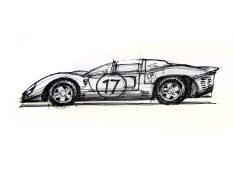 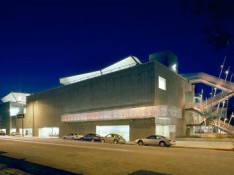 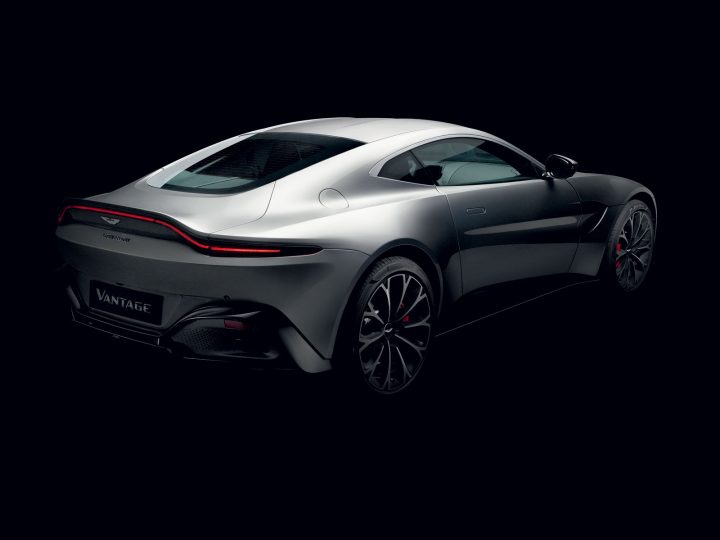 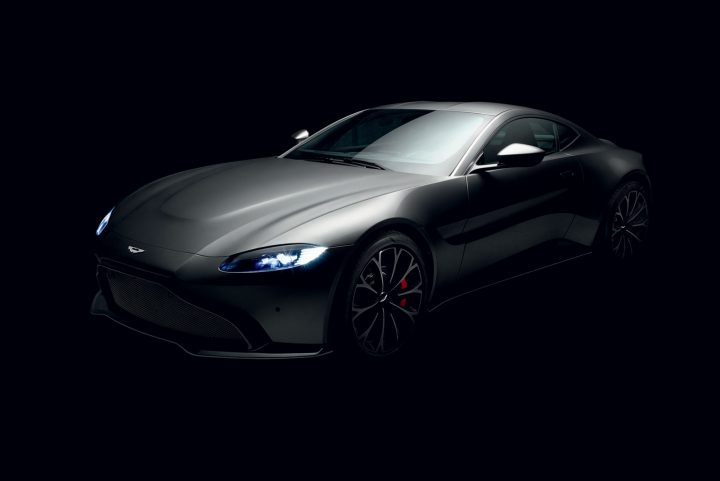 The outgoing Vantage model was first presente in 2005 as a V8 model and was followed in 2009 by the V12-powered variant. 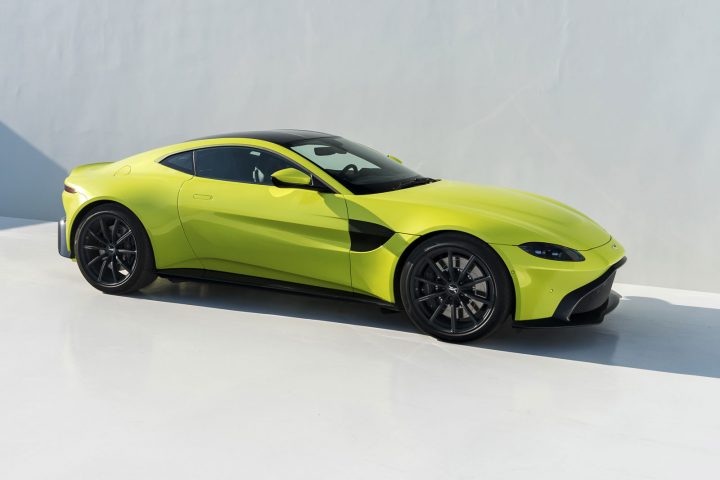 The new model is characterized by a modern design, with a low, athletic stance, and sporty proportions with minimal overhangs. 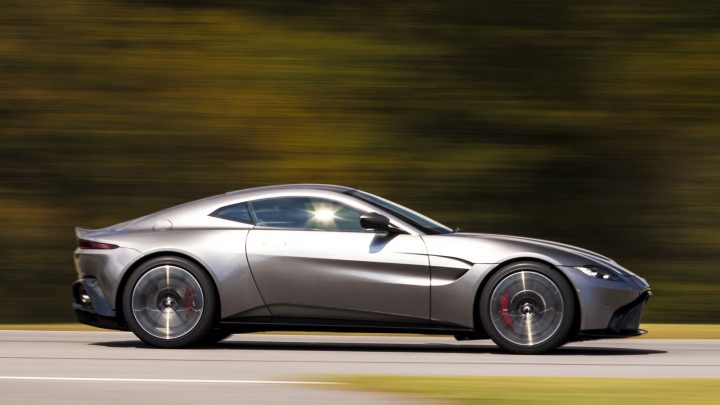 Among the most distinctive new elements are the renewed light signatures, with clean, minimal headlights and full-width LED tail lights. 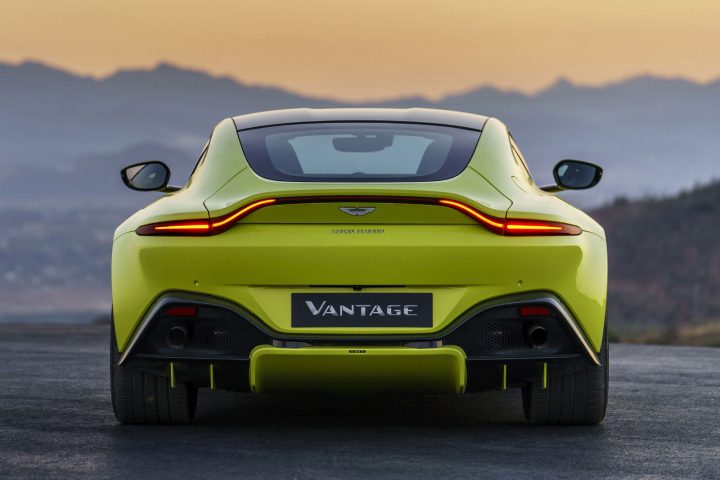 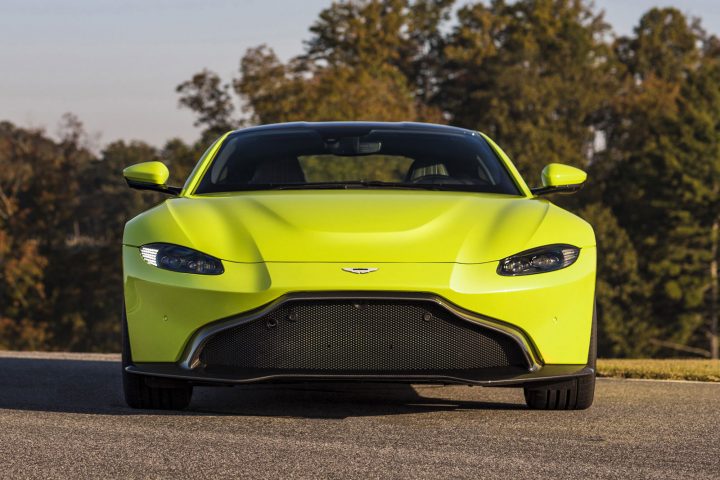 The aggressive character of the Vantage is underlined by the muscular flanks and shoulders and by the many aerodynamics-focused elements. 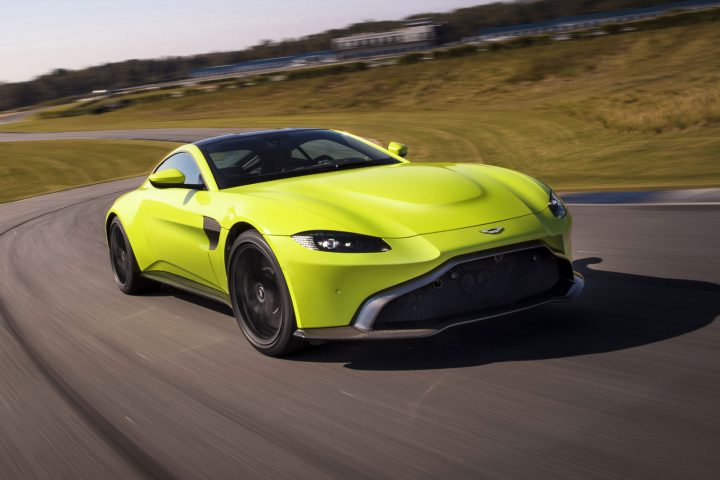 These include the imposing front splitter and rear diffuser, the  pronounced upswept rear deck lid as well as new side gills, integrated into the body surfaces. 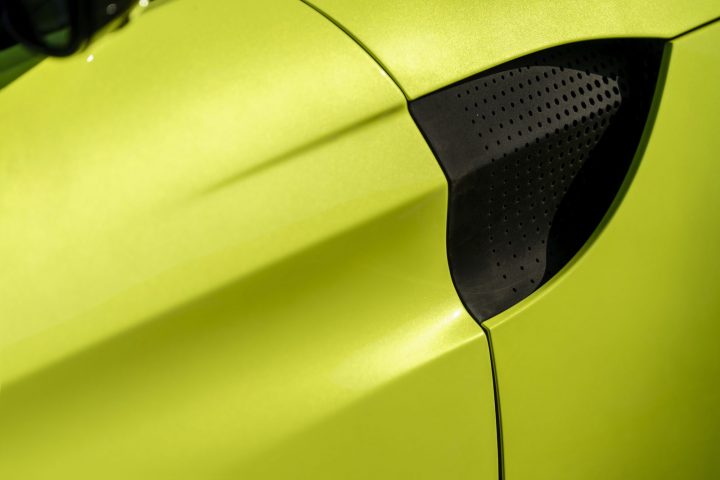 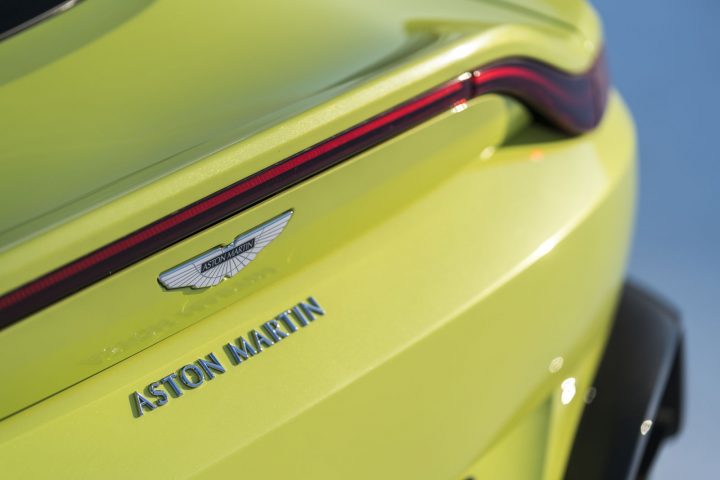 The interior echoes the aggressiveness of the exterior with sharp, focused lines, while the high waist layout and the low driving position create an immersive driving experience. 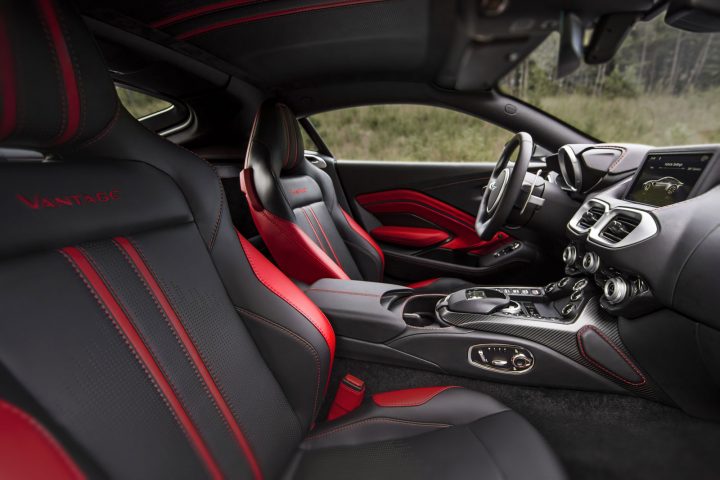 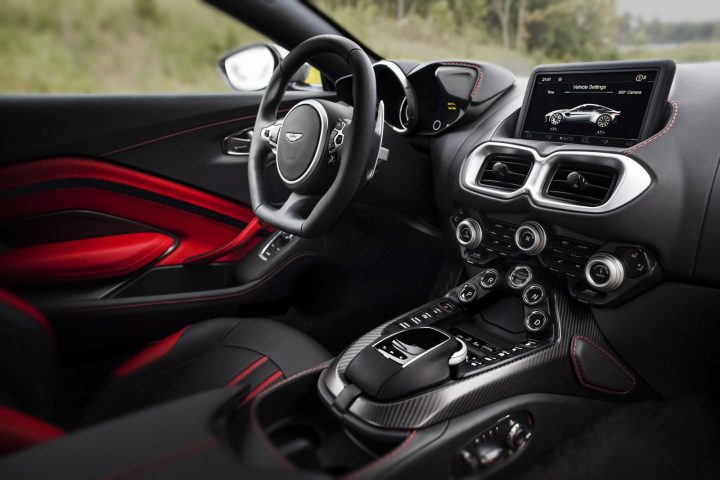 The unit is coupled with a rear-mounted ZF eight-speed automatic transmission. The dry weight is 1530kg. 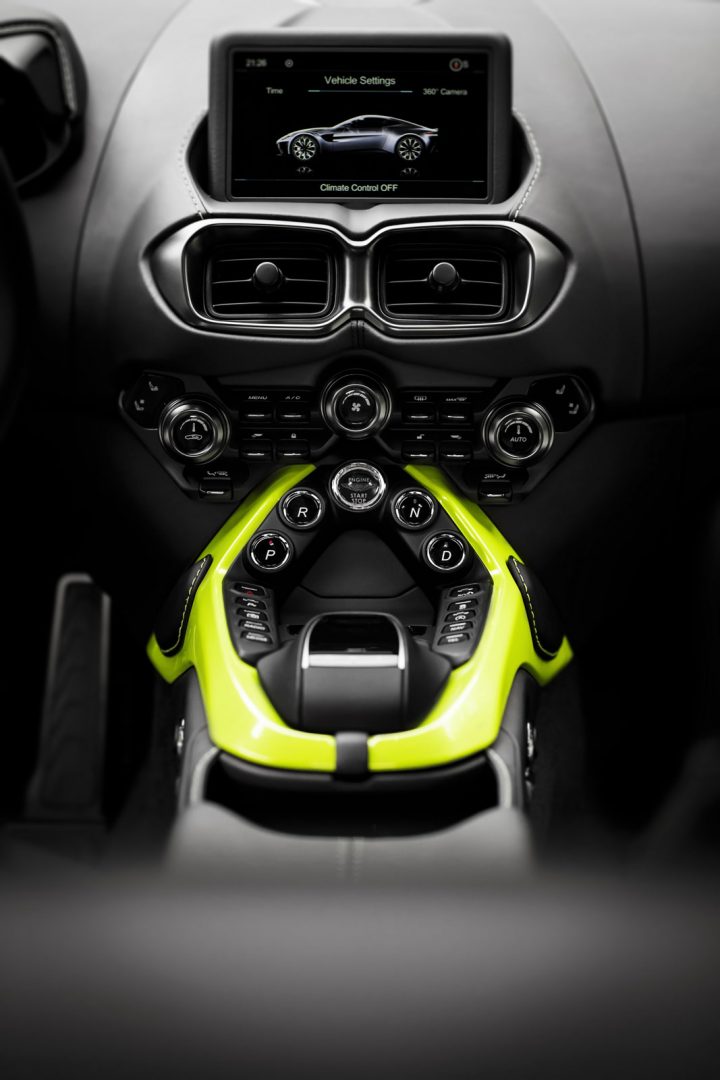 21 November 2017, Gaydon: Vantage. An evocative name for a magnificent bloodline of thoroughbred sports cars. For seven decades the heartbeat of Aston Martin’s purest models, the Vantage nameplate has been worn by some true icons. First used in 1951 on a high-output engine option for the DB2, Vantage was quickly established as a model in its own right. Highlights include the William Towns-designed V8 Vantage, spectacular twin-supercharged V600 Le Mans and the much-loved V8 Vantage. Today this formidable sporting dynasty is poised to hit new heights with the introduction of the new Vantage.

Aerodynamic performance was central to the Vantage design concept: the front splitter directs airflow underneath the car, where a system of fences channels cooling air where it is needed, and also ensures the rear diffuser is fed with clean airflow. The design of the diffuser creates an area of low pressure air, while simultaneously preventing turbulence generated by the rear wheels from disrupting the flow of air exiting centrally from beneath the rear of the car.

Together with the new side gills, which have been integrated into the body surface and bleed air pressure out from the front wheel arches, and the pronounced upswept rear deck lid, the Vantage generates a significant level of downforce – a rarity on any production car and a first for a core production Aston Martin model.

The design story continues inside the Vantage, with a dynamic and focused sports car cockpit that rejects long, fluid curves in favour of sharp, focused lines denoting the more aggressive nature of the car. A high waist interior theme and lower driving position creates a more immersive driving experience, and contributes to significant gains in occupant space and significant improvement in headroom compared with the outgoing Vantage. A combination of rotary and toggle style controls have been used for their tactile and intuitive functionality. Likewise, the PRND transmission buttons have been moved into a triangular formation so as to cluster major controls into clearly defined zones. The interior also offers generous stowage space, with useable room behind the seats and generous double-tier storage areas.

The heart of the Vantage is Aston Martin’s potent new alloy, 4-litre twin-turbo V8 engine.  Set low and as far back in the chassis as possible for optimal centre-of-gravity and perfect 50:50 weight distribution, this high performance, high efficiency engine returns a CO2 figure of *245g/km yet develops 510PS at 6000rpm and 685Nm from 2000-5000rpm. With a dry weight of 1530kg this gives the Vantage formidable power-to-weight and torque-to-weight ratios – something vividly demonstrated whenever the throttle is squeezed. Detailed tuning of the induction, exhaust and engine management systems has given the Vantage a truly intoxicating character and soundtrack.

The Vantage deploys its impressive power and torque to the rear wheels via a rear-mounted ZF eight-speed automatic transmission. Capable of accelerating from 0 to 60mph in 3.5 seconds and on to a maximum speed of 195mph, it employs a sophisticated suite of integrated electronic systems to offer maximum control and driver enjoyment. These include Dynamic Stability Control and Dynamic Torque Vectoring. The speed-dependent electric power steering has 2.4 turns lock-to-lock for an outstanding combination of responsiveness and precise, intuitive control.

For the first time on an Aston Martin the new Vantage also features an Electronic Rear Differential (E-Diff). This differential is linked to the car’s electronic stability control system, so it can understand the car’s behaviour, and react accordingly to direct the engine’s power to the relevant wheel. Unlike a conventional LSD, it can go from fully open to 100% locked in a matter of milliseconds.  At higher speeds, the Electronic Differential’s speed and sensitivity of response enables the system to take very fine control of the car’s dynamic behaviour. It makes the car feel much more composed both in terms of its straight-line stability and its cornering performance, providing the driver with increased levels of confidence to explore and enjoy the car’s capabilities to the full.

The chassis is an evolution of the latest generation bonded aluminium structure first seen on the DB11, though some 70 per cent of the structure’s components are new for Vantage. Balance, strength, rigidity and weight efficiency were all priorities in the new Vantage design, as was handling purity and consistency. Highlights of the chassis include a solidly mounted rear subframe for an enhanced feeling of direct connection for the driver, new Pirelli P Zero tyres developed specifically for new Vantage and the latest generation Adaptive Damping System which incorporates Skyhook technology and offers the choice of Sport, Sport Plus and Track modes.

Thanks to full integration of engine, transmission, E-Diff, Dynamic Torque Vectoring, Dynamic Stability Control, Adaptive Damping and the electric power steering systems, each mode optimises every area of the car as one. With each step the Vantage gains in agility and responsiveness, its character becoming progressively sharper, more vocal and more exciting. This is the essence of the Vantage driving experience – a car that’s never less than connected and engaging with the breadth of capability to revel in challenging roads and bare its teeth on track.

Being an Aston Martin, the new Vantage also features a high level of craftsmanship, evidenced by flawless paintwork, luxurious Alcantara® and leather upholstery and the levels of finish optimised through the use of tactile natural materials of the highest quality. There is also extensive scope for personalisation via a generous choice of options. These include forged alloy wheels in a variety of finishes, Sports Plus Collection (comprising Sports Plus seats and Sports steering wheel), carbon fibre interior and exterior detailing and a Premium Audio System.

Aston Martin President Chief Executive Officer, Dr Andy Palmer said: “It speaks volumes for the outgoing Vantage that it is the single most successful model in Aston Martin’s history. Creating a worthy successor has been a challenge to relish and a huge source of motivation. I’m enormously excited by what we’ve created: a new Vantage that’s more explicit in looks and intent, wrapping heart-pounding performance and dazzling dynamics into an everyday usable package. A true sports car with a sharper look and a keener dynamic edge, the new Vantage is the Aston Martin pure driving machine enthusiasts have been waiting for.” 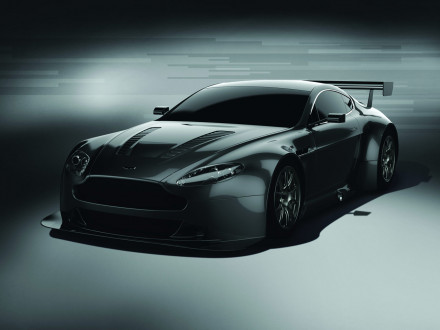 Aston Martin Racing has revealed the new Vantage GT3 race car based on the V12 Vantage model. It will replace the replace the DBRS9 and will be ready for the 2012 season.