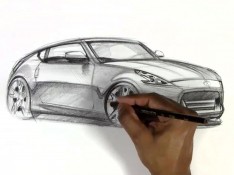 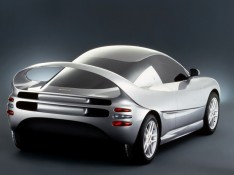 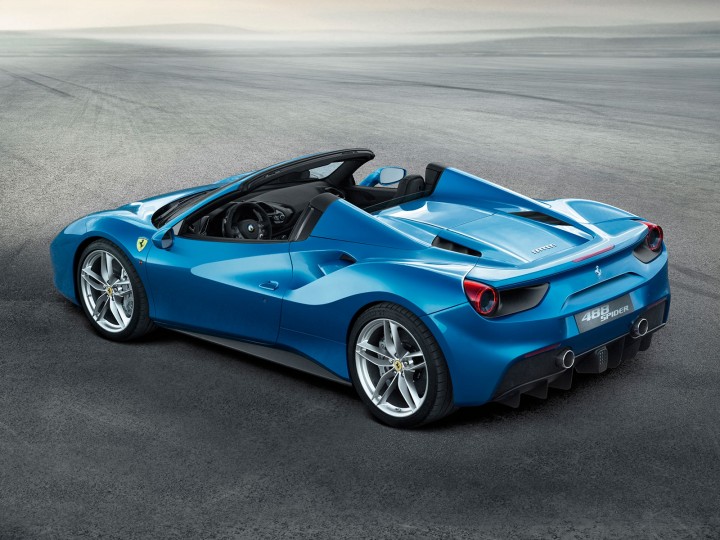 Ferrari has unveiled the 488 Spider, the most aerodynamically efficient open Ferrari ever built. It features a retractable hard top and will make its debut at the 2015 Frankfurt Motor Show.

The 488 Spider is based on an aluminum spaceframe chassis and bodyshell and is equipped with the new turbo-charged V8 that was introduced on the 488 GTB just a few months ago. 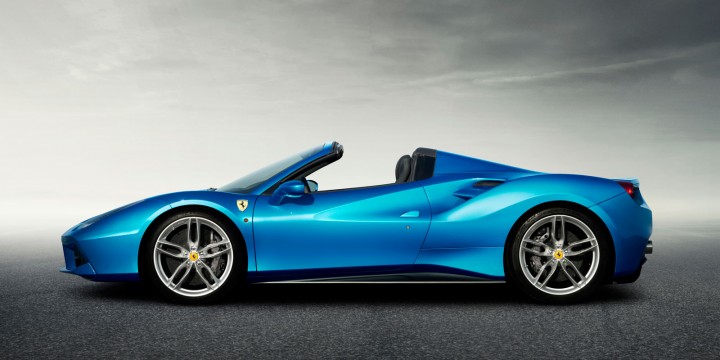 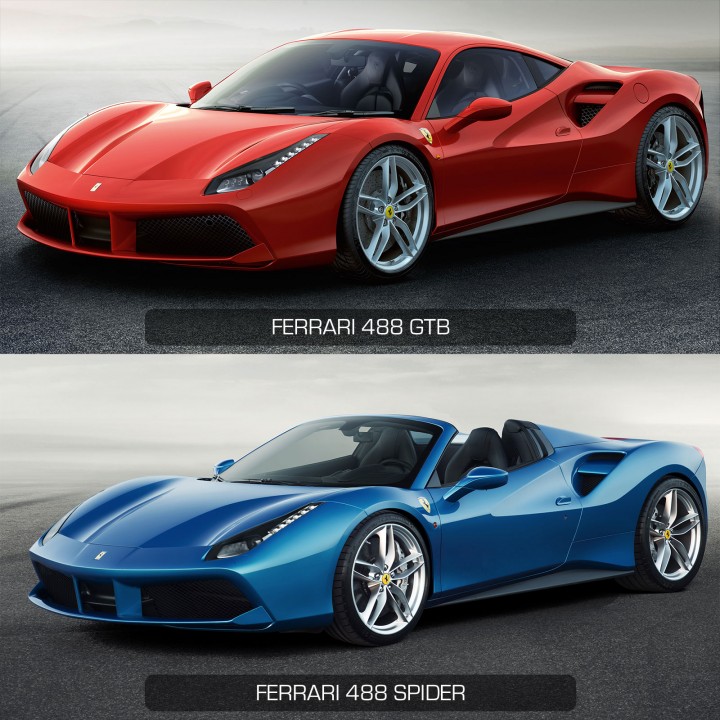 The turbo V8 has a unique character, delivering increasing levels of power right across the rev range, and completely eliminating the traditional turbo lag with a throttle response time of just 0.8 seconds.

In line with Ferrari tradition, this model has its own absolutely distinctive soundtrack created using solutions such as exhaust headers with longer, equal-length piping and a flat-plane crankshaft. It was also further enhanced by an in-depth study of harmonics and tonality at different engine speeds. 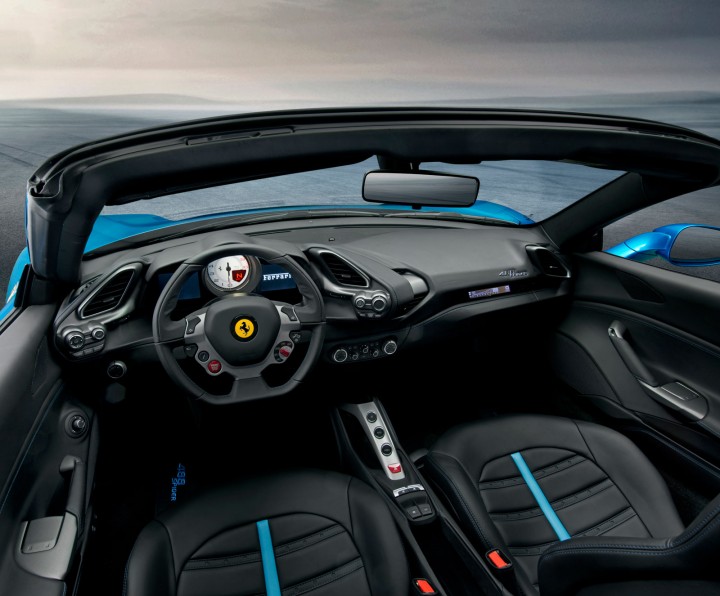 Ferrari was the first manufacturer to introduce the RHT (Retractable Hard Top) on a car of this particular architecture. 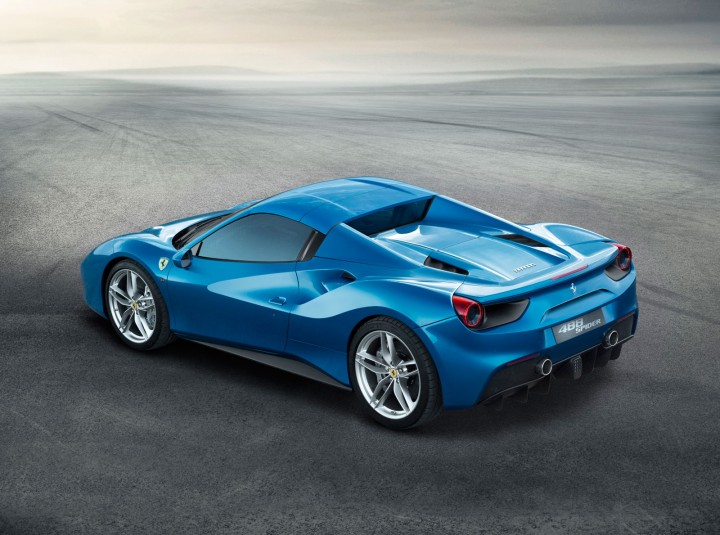 This solution ensures lower weight (-25 kg) and better cockpit comfort compared to the classic fabric soft-top. Just like all previous spider versions of Ferrari’s models, this is a car that is aimed squarely at clients seeking open-air motoring pleasure in a high-performance sports car with an unmistakable Ferrari engine sound.

This is also the most aerodynamically efficient Ferrari spider ever built, thanks to a series of complex aero solutions designed to guarantee optimal downforce whilst reducing drag, two normally mutually-exclusive objectives. 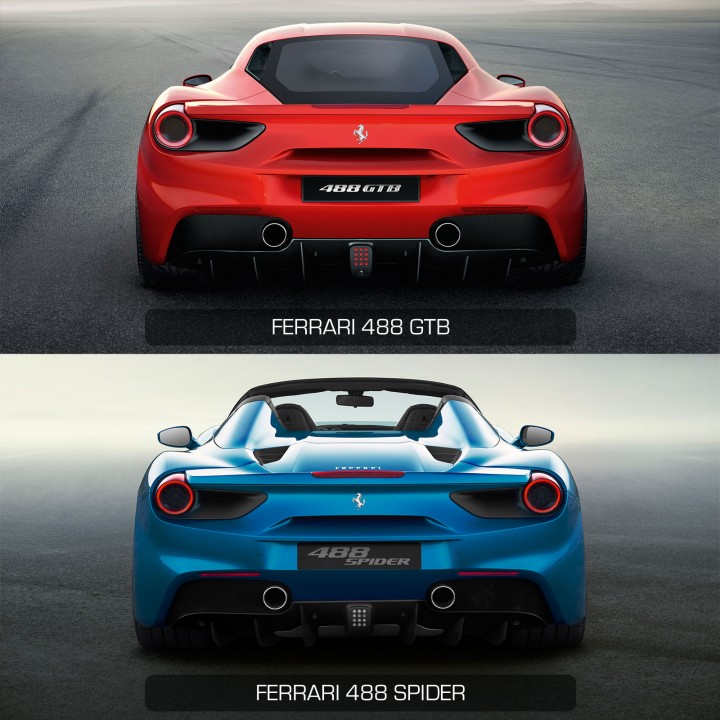 This result was possible thanks to several innovative devices, including a blown spoiler and an aerodynamic underbody incorporating vortex generators.

The air flow studies also took into account factors relating to in-car comfort. The electric glass rear wind stop can be adjusted to one of three positions to guarantee maximum comfort when the top is lowered. Fully lowering the wind stop allows the occupants to enjoy the engine soundtrack even with the roof raised regardless of the weather or driving conditions. 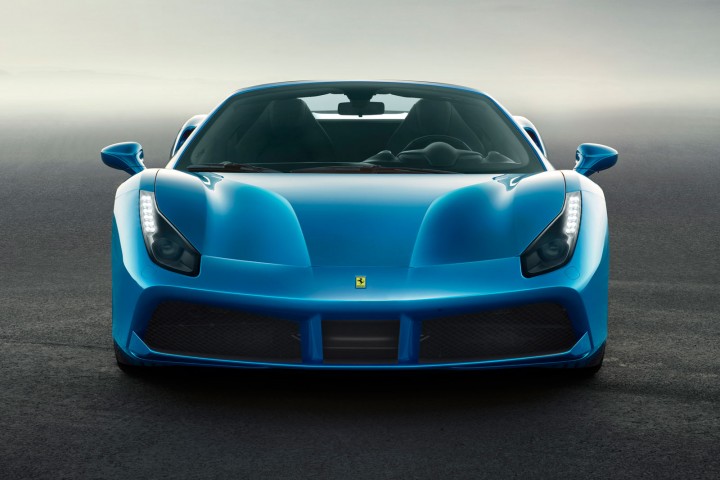 Designed around the concept of the retractable hard top, the 488 Spider has a spaceframe chassis made of 11 different aluminium alloys combined with other noble metals, such as magnesium, each one used in a highly specific way.

This yields the same torsional rigidity and beam stiffness figures as the coupé, improving the chassis’ performance by 23% over that of its predecessor. An extraordinary result, given that the roof is structural, that is only possible thanks to the expertise of the Scaglietti centre of excellence that engineers Ferrari’s aluminium chassis and bodies.

The RHT folds backwards in two overlapping sections to rest flush on the engine in a very compact solution. The mechanism is exceptionally smooth and takes just 14 seconds for the top to fully retract or deploy.

Working with aluminium is important not only in functional terms but also because, by tradition, it demands every detail be treated sculpturally to express the technical excellence of the project through its beauty.

Cases in point are the flying buttresses which optimally channel air flows to the engine cover, the ribbing on the engine cover and the air intakes with sculpted mesh grilles which lend that area of the car a sense of incredible dynamism. To achieve this result the Ferrari Styling Centre completely reworked the aesthetics compared to the 488 GTB.

The introduction of a sophisticated simulator, similar to the one used by the Formula 1 Scuderia, allowed the human factor to influence the car’s design from the earliest stages by giving the engineers instant feedback from the test-drivers long before the first 488 prototype was physically built.

To make its dynamic behaviour even more engaging, the development team honed the car’s mechanical set-up in tandem with its electronic systems which are now fully integrated with the SSC2 Side Slip Angle Control System, resulting in 12% faster acceleration out of corners than the 458 Spider.

Over all, response times are 9% more rapid than the previous Spider without any compromise whatsoever being made in comfort.The car’s design was adapted to efficiently meet the typical the demands of open-top driving and use. In fact, the Spider’s dynamic behaviour is effortless on even the most challenging routes. It is remarkably easy to drive on the limit thanks to flawless handling even on the most demanding of roads.