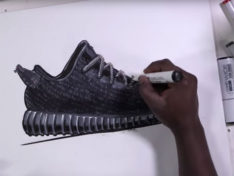 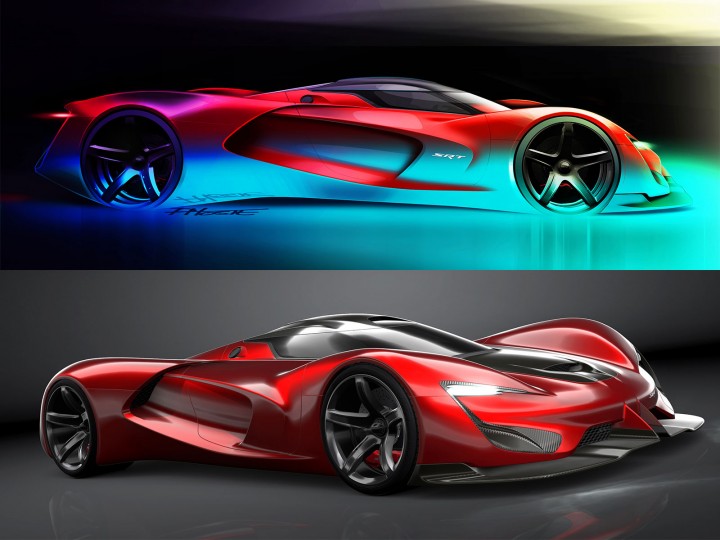 The SRT Tomahawk Vision Gran Turismo is a single-seat virtual concept designed and engineered for extreme performances to test the limits of technology and human physiology.

The racing car developed by SRT – Street and Racing Technology, the performance division of FCA US – envisions an extreme vehicle for the year 2035 and was developed by the design and SRT engineering departments. 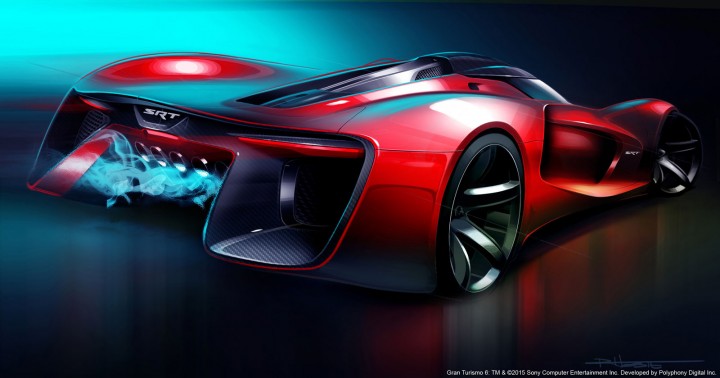 The car will appear in a free update of the PlayStation®3 exclusive title “Gran Turismo 6” in the summer of 2015. 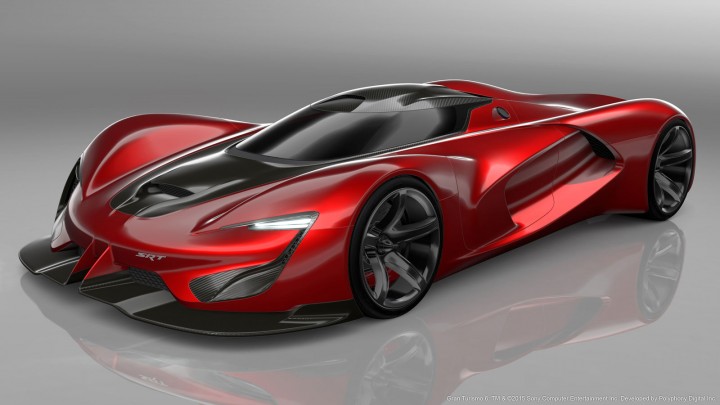 The exterior design of the SRT Tomahawk Vision Gran Turismo was born from an internal design competition that sought a futuristic (2035) interpretation of a high-performance Dodge. 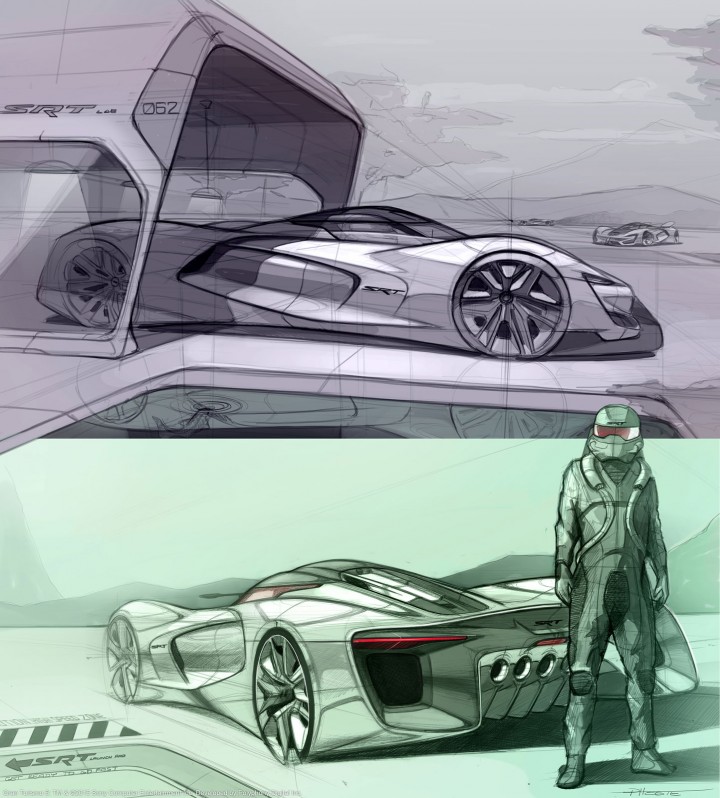 “It doesn’t take much to bring out the competitive spirit of the FCA US design team,” said Ralph Gilles, Head of Design, Fiat Chrysler Automobiles N.V. “We have plenty of Gran Turismo fans in the room and every one of them has the same goal – win the race. Everything we’ve done with the SRT Tomahawk Vision Gran Turismo aims for that goal.” 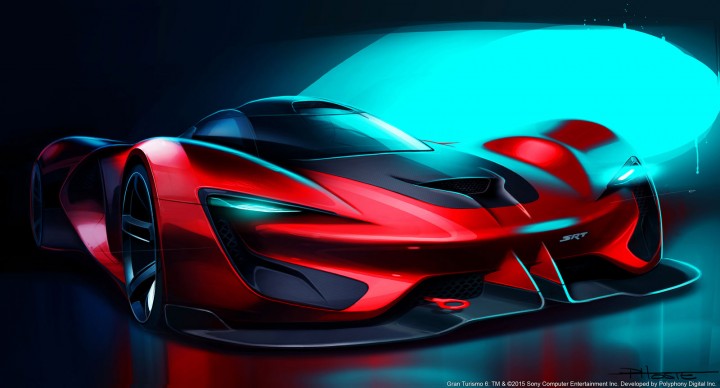 Everyone, from interns to seasoned designers, was invited to submit a sketch. As a result, designers worked on their sketches in their spare time, weekends and after hours producing a flood of proposals.

At the conclusion of the judging process, Paul Hoste was selected as the winner. Hoste, a young designer and new to FCA, grew up playing Gran Turismo.

He was inspired by concept art and gravitated toward a design that had amped up, voluptuous curves that paid homage to iconic Dodge performance vehicles.

The overall shape of the SRT Tomahawk Vision Gran Turismo imparts a sense of movement and flow, and is characterized by a narrow waistline and a structural spine that extends behind the cockpit. 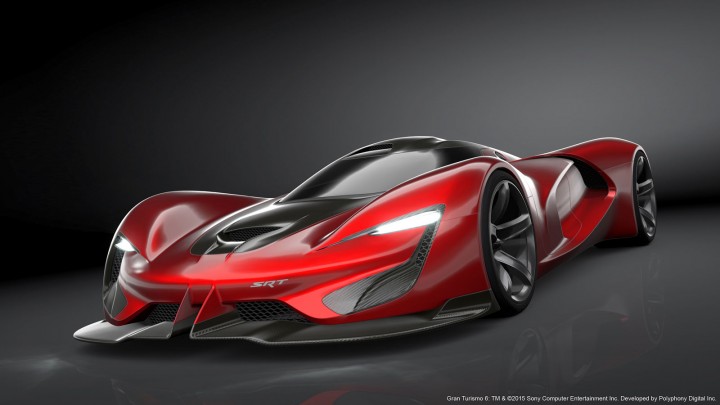 The front view conveys an aggressive, almost menacing character, while the rear view takes on a bolder and powerful aesthetic with angular graphics and asymmetric look to the fenders. 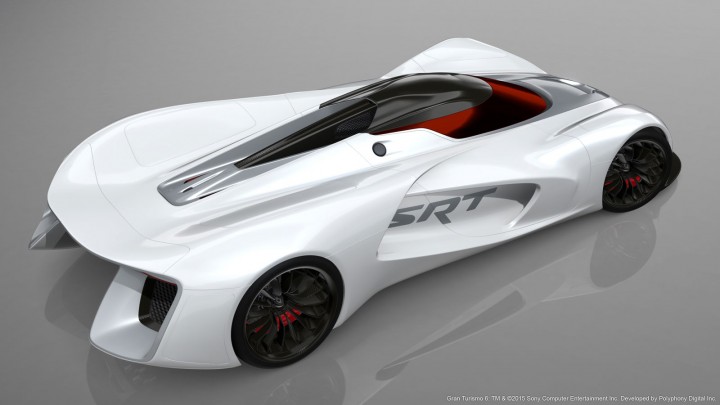 All of the transparent elements, including the cockpit and engine cover, are made from ultra-light graphene skins – a form of carbon.

The driver views the SRT Tomahawk Vision Gran Turismo’s instruments and communication system on a clear digital overlay on the graphene windshield. 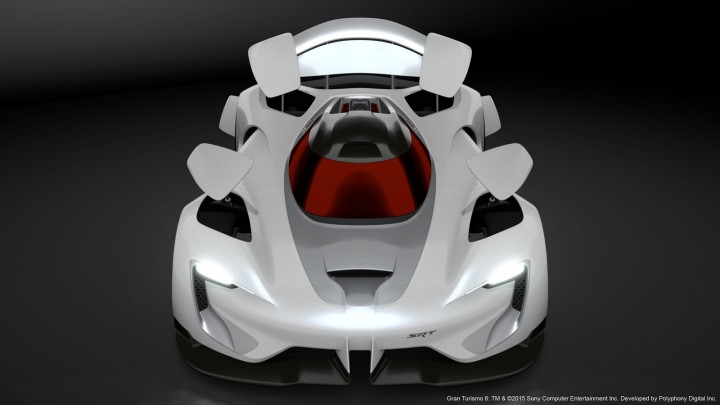 A large air intake for engine cooling is mounted on the hood. Active panels mounted above the front and rear fenders are constantly moving, via pneumatic assist, to create the optimal amount of aerodynamic downforce for braking assist and traction under acceleration. 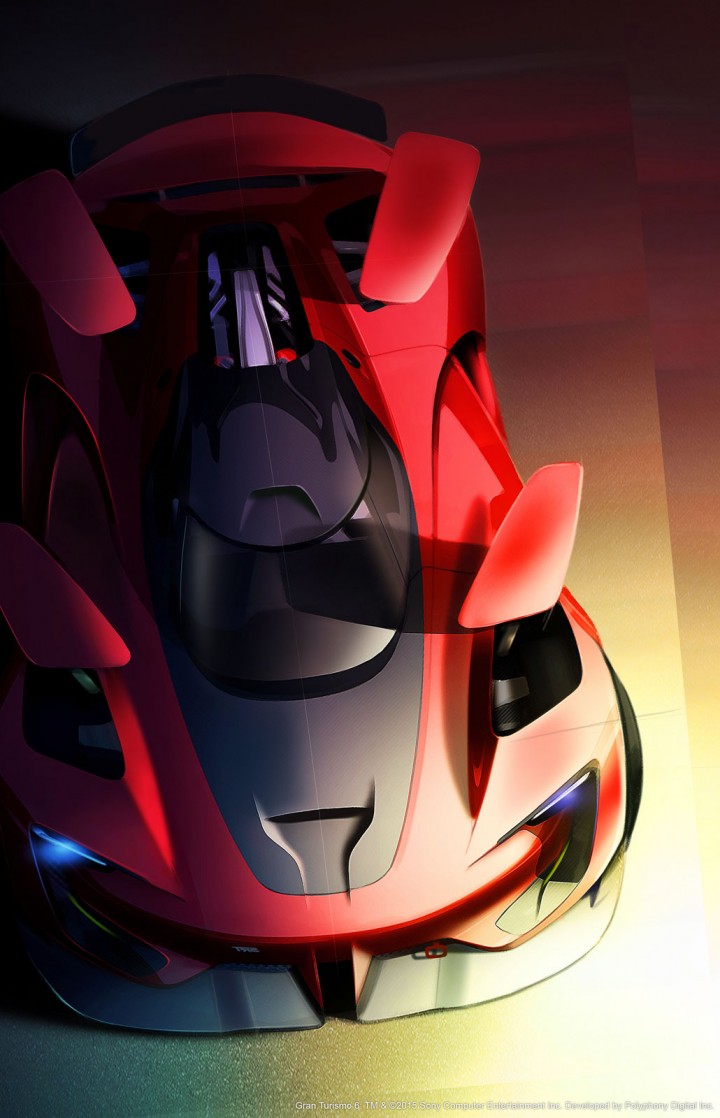 An overhead view of the SRT Tomahawk Vision Gran Turismo is marked by a “pinched-waist” silhouette. An exposed aluminum spine channels air to help cool the V-10 engine.

Curved, voluptuous surfacing was used to create a timeless design that is accented by functional NACA style air intakes on the front and large air intakes for engine and brake cooling on the side. 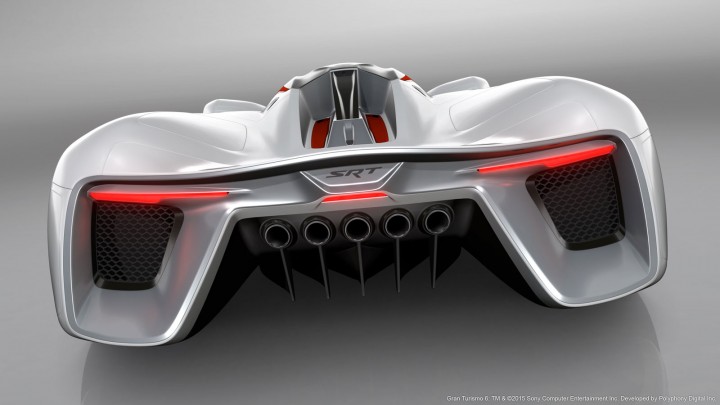 The rear of the SRT Tomahawk Vision Gran Turismo has been thoughtfully designed for maximum visual impact – as this is the primary view for the gamer (and his or her competitors) during play. 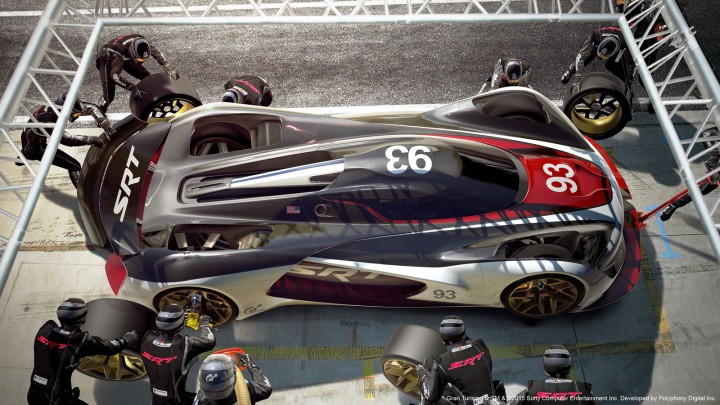 A bold, carbon fiber graphic detail is prominent. Thin LED lights and five large exhaust ports are integrated in the rear diffuser to create an intimidating and planted look.

Hoste worked closely with SRT engineering to optimize the hard points and performance numbers of his design for function and aerodynamics.

The SRT Tomahawk Vision Gran Turismo was engineered with the goal of pushing performance just beyond the limits of known science, and challenging the limits of human physiology. 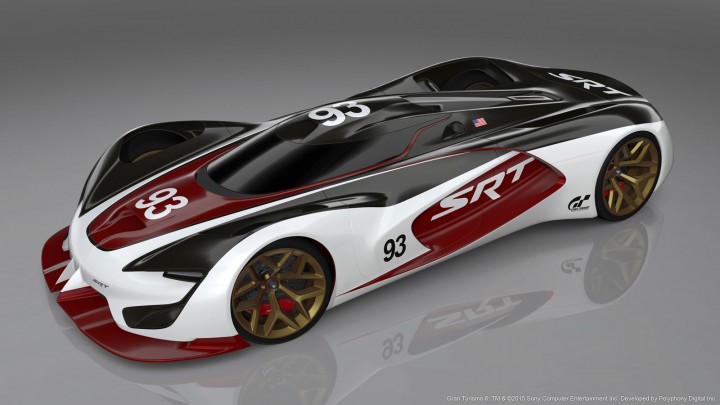 The entire vehicle design, from the driver position to the nearly flat layout of the V-10 engine, is intended to achieve the lowest possible center of gravity.

The main power source of the Tomahawk is a 7 liter V10 engine with a 144 degree bank angle. The front tires are connected to a pneumatic power unit that stores compressed air to produce drive force.

This pneumatic power unit not only drives the front wheels, it also operates the air suspension system for all 4 wheels and powers the pressurization of the G suit worn by the driver. In addition it is also utilized to activate the aero panels placed all over the body. 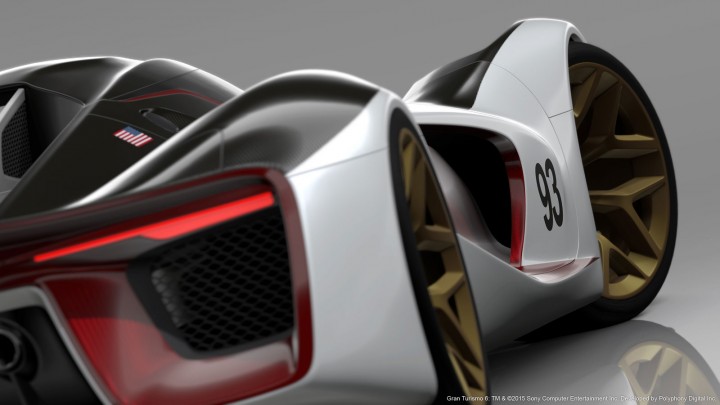 The Tomahawk has built in aero panels above the 4 fenders, at the rear end of the body sides, and at the rear, which are activated by pneumatic power as necessary to produce downforce and even perform yaw control of the car in corners.

A revolutionary active camber system adjusts the wheel knuckles to “lean” the vehicle into turns, with each wheel angling outboard or inboard to maintain the optimum tire contact patch and highest possible mechanical grip.

Mike Shinedling, Manager – Advanced Concepts, SRT Engineering, commented: “We had fun stretching our minds to create the SRT Tomahawk for Gran Turismo 6. The game places a high emphasis on capturing reality in a virtual environment; our goal was to respect that philosophy by focusing on plausible future technologies that could achieve our vision of extreme performance.

“Everyone can appreciate an exquisite design and something that is beautifully engineered; when those two things are brought together in a fusion of cooperation, there is nothing more exciting.”

The Tomahawk S is the entry level machine to prep players for the incredible performance of the Tomahawk series; but the specs of the “S” are already off the charts. 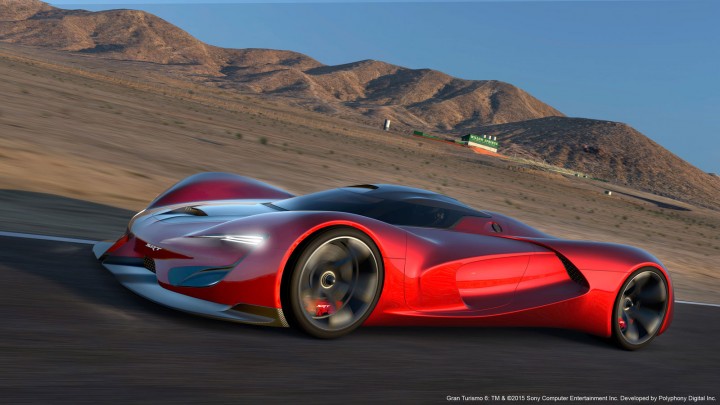 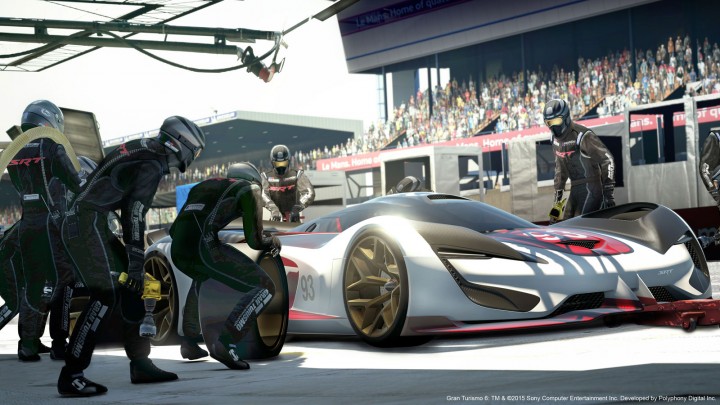 Aggressive weight-cutting techniques whittles the curb weight of the Tomahawk GTS-R to 1,459 pounds (the lightest of any version) and the top speed in excess of 300 mph.

This is the ultimate Tomahawk that incorporates a variety of experimental technologies. With a redline set at 14,500 rpm, the V-10 engine delivers 2,168 hp (nearly three times the output from the base Tomahawk S). 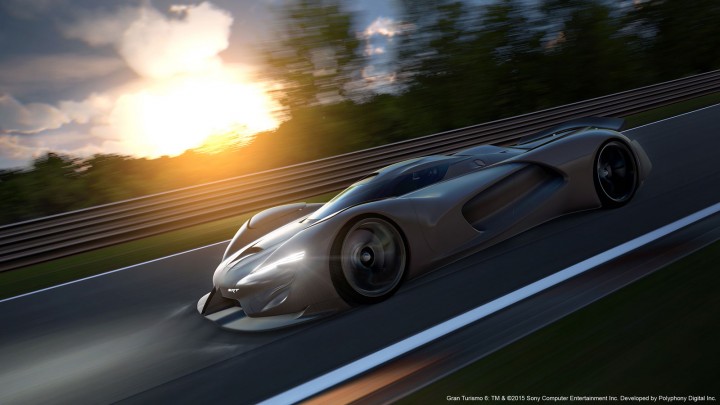 The front wheel drivetrain contributes an additional 422 hp at peak, for total output of 2,590 hp. That gives the Tomahawk X a top speed of 404 mph.

Due to the extreme performance of the X version, the driver is required to wear a G-suit to withstand the extreme cornering forces.

“FCA US designers took part in a design competition and the concept that was chosen is extreme in every way with its striking form, aerodynamic proportions, internal mechanisms and advanced driver’s suit. Due to the radical design of the vehicle, our physics team had to develop new physics for Gran Turismo in order to represent the car properly in the game. We thank everyone at FCA who enjoyed the Vision Gran Turismo project and I am looking forward to the day when we can share the vision of SRT with Gran Turismo players.” 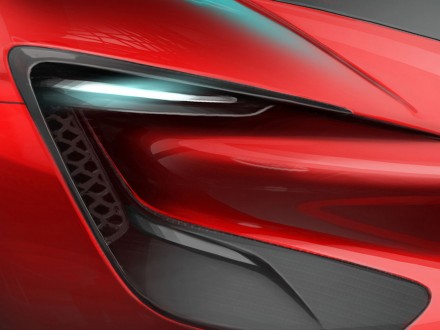 FCA has revealed the first teaser images of the SRT Tomahawk Vision Gran Turismo, a single-seat hybrid virtual concept vehicle to be released in Gran Turismo6. 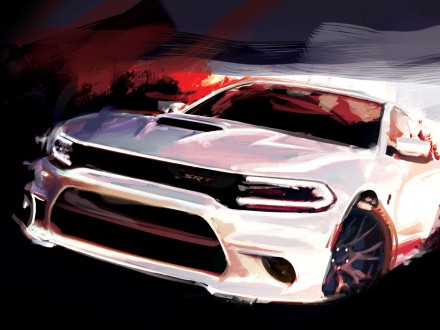 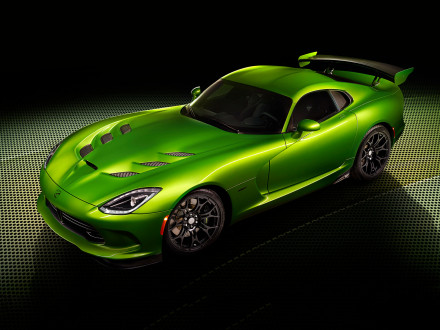