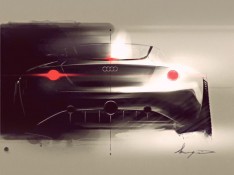 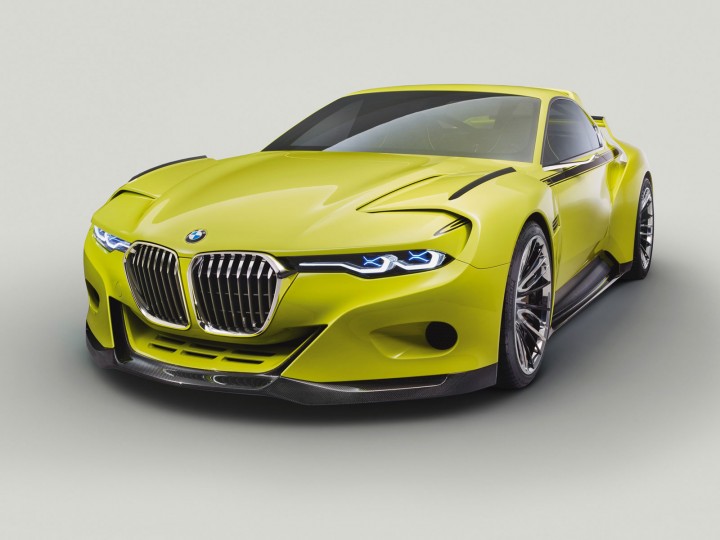 The official design story of the BMW 3.0 CSL Hommage Concept, the study presented at the 2015 Concorso d’Eleganza Villa d’Este.

Developed in-house by BMW Design Team, the 3.0 CSL Hommage Concept is a tribute to the original 3.0 CSL, a timeless classic and iconic BMW Coupé from the 1970s. 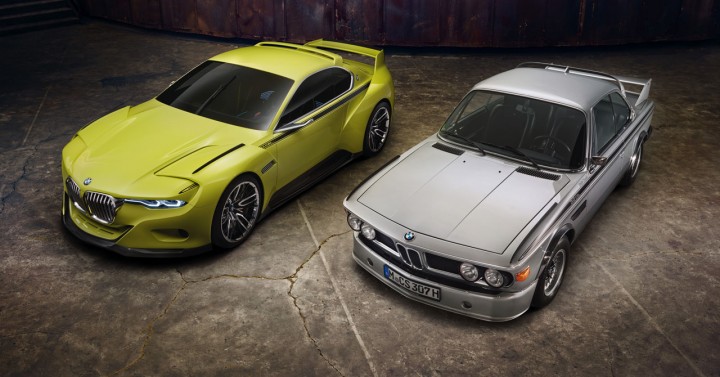 Here we report the official design story of the vehicle, including commentary by design managers.

“Our Hommage cars not only demonstrate how proud we are of our heritage, but also how important the past can be in determining our future,” says Adrian van Hooydonk, Senior Vice President BMW Group Design. 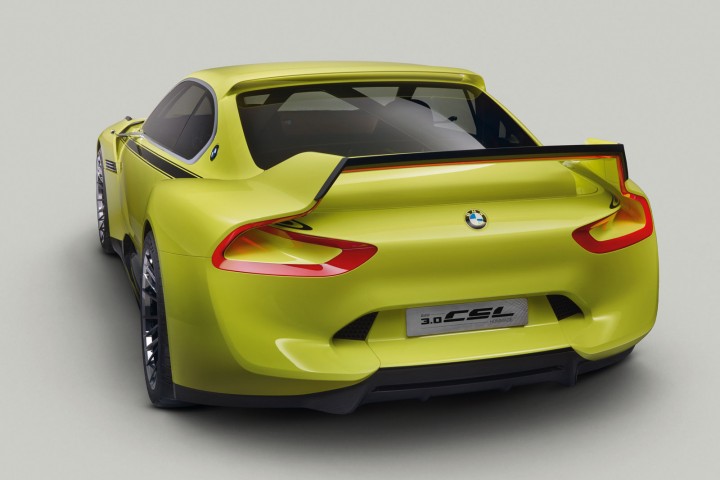 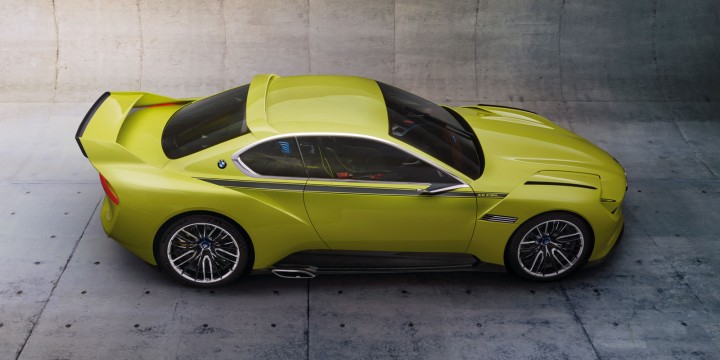 “CSL” stands for “Coupé Sport Leichtbau” (coupé, sport, lightweight). With its aluminium bonnet, boot and wings, Plexiglas windows and equipment rigorously pared down to the bare essentials, the old BMW 3.0 CSL tipped the scales around 200 kg lighter than its sibling model, the BMW 3.0 CS, and later had a career on the race track.

Reinterpreting the concept of lightweight design, today’s Hommage Concept makes extensive use of carbon fiber – or carbon-fiber-reinforced plastic (CFRP) and making it visible to the observer.

Karim Habib, Head of BMW Design, explains the thinking behind the design of the BMW 3.0 CSL Hommage: “For BMW designers like us, the BMW 3.0 CSL is a style icon. Its combination of racing genes and elegance generates an engaging aesthetic that continues to win hearts even today. The BMW 3.0 CSL Hommage celebrates many of those characteristic features, but without copying them. Indeed, some of the parallels are not immediately obvious. We wanted people to sense the family resemblance rather than see it straight off.” 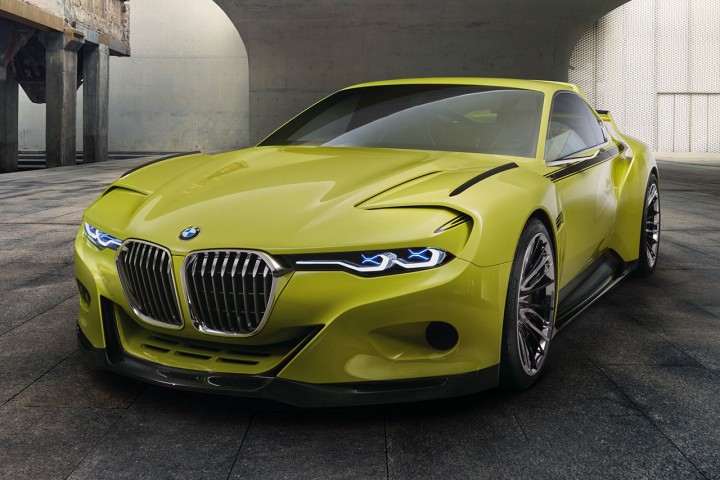 The BMW 3.0 CSL Hommage is a vision of pure athleticism: the elongated body is set off by distinctive air deflectors, powerful wheel arches and prominent spoilers to the roof and tail.

Despite its size, the aerodynamic elements are key in enabling air to flow optimally along the sides of the vehicle.

The front air deflector serves to vent the engine compartment, while wings over the rear wheels ensure optimum airflow around the vehicle. Small rear-view cameras serve to further reduce aerodynamic drag. The large rear spoiler increases downforce on the driven rear axle and in so doing improves power transmission.

The Air Curtain and Air Breather systems guarantee optimum ventilation of the wheel housings. And the sheer self-confidence and sporting prowess of the BMW 3.0 CSL Hommage are perfectly summed up in the original color of its spiritual predecessor – Golf Yellow.

Boasting one of the broadest and lowest front ends of any vehicle in the BMW Group, the BMW 3.0 CSL Hommage’s front exudes power and athleticism. 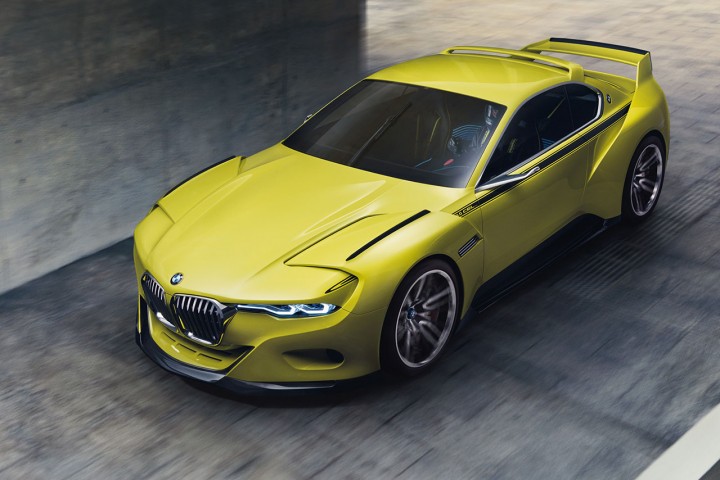 At the center, the characteristic BMW kidney grille stands tall in citation of the more upright styling of the kidney grille of yesteryear. The size and spatial depth of the kidney grille symbolize the output of the powerful six-cylinder in-line engine with eBoost. At the same time, the finely wrought geometry of frame and kidney struts lends the front end an air of quality and exclusivity. 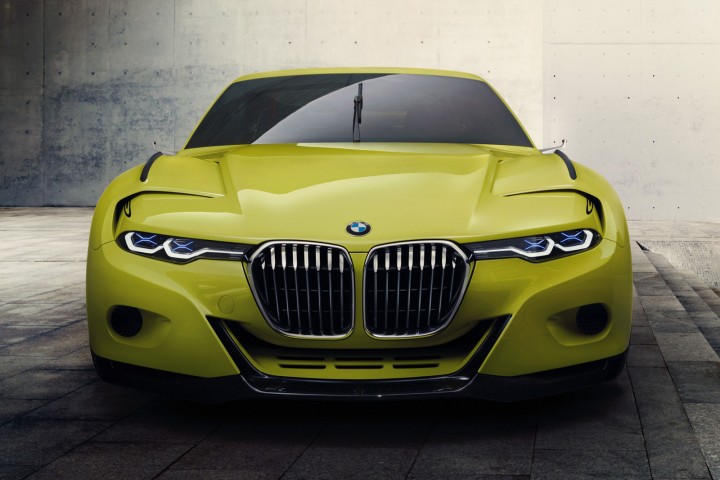 A stylized “X” inside the lights divides the lighting functions and conjures up memories of the X-shaped headlamp stickers once used in long-distance racing. Horizontal LED strips create a visual bond between headlamps and kidney grille while at the same time emphasizing the broad, flat impact of the front end.

A large carbon-fiber front splitter reduces the gap between road and front end and, in combination with the kidney grille, offers a modern interpretation of the earlier car’s highly distinctive shark nose. Two circular openings and a series of elongated slots pay tribute to other elements featured in the earlier car, but offer a new interpretation for the 21st century.

The vehicle sides are in elegant counterpoint to the marked athleticism of front and rear. The long wheelbase and elongated bonnet appear to stretch the Hommage’s silhouette. 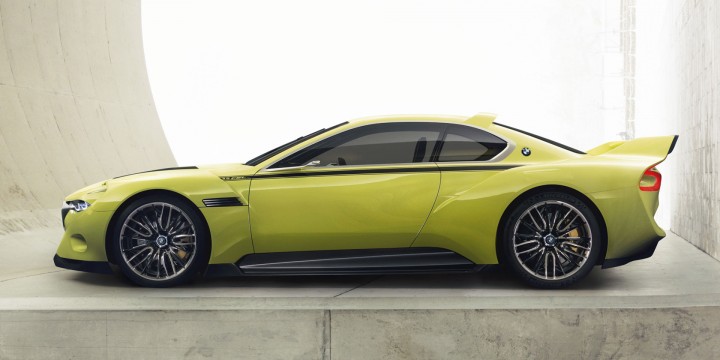 A continuous, horizontal line encircles the vehicle by way of paying tribute to a distinctive stylistic feature of the earlier BMW 3.0 CSL: its all-round chrome trim. In combination with the black highlight beneath, the continuous line intensifies the flat, elongated appearance of the sides.

A particular detail of the BMW 3.0 CSL Hommage is the roofline. Consciously subdivided into three, the line recalls the distinctive upper section of the BMW 3.0 CS – one of the first coupés to feature a roof that did not flow into the tail. Compared with the ubiquitous fastback coupés of the day, this was both an innovation and a design statement, a feature that exuded athleticism and elegance in equal measure. In keeping with the BMW 3.0 CSL, the Hommage features a BMW logo on each of the C-pillars.

The all-round shoulder line is also the starting point for the subtle, finely sculpted surfaces of the sides. It follows the development of the shadowy areas behind the front wheel all the way to the lit surfaces above the rear wheels.

This interplay between light and shade lends movement and dynamic intensity to the generous surfaces of the vehicle’s sides.

Dark CFRP areas narrow the gap between the sides and the road, again paying tribute to the consistent lightweight design of the BMW 3.0 CSL. In combination with the black graphic accents, the dark lightweight elements reduce the perceived height of the vehicle and further emphasize its flat silhouette. 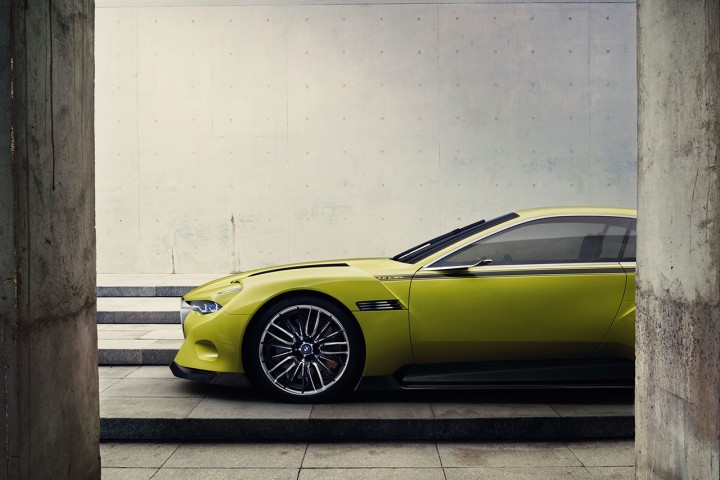 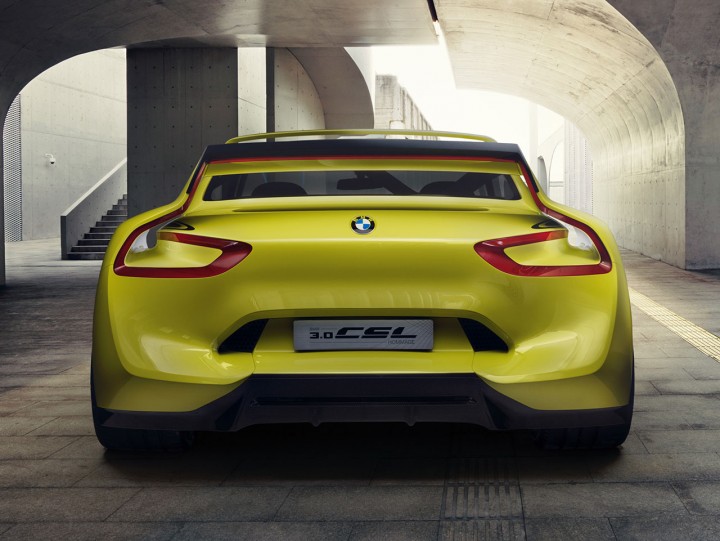 As with the front end, the vehicle’s tail is broad and muscular in design. Generous surfaces generate presence, horizontal elements emphasize width. A particular highlight is the styling of the rear lights: an LED strip above the spoiler links the two lights, thus giving the rear end a formal framework. 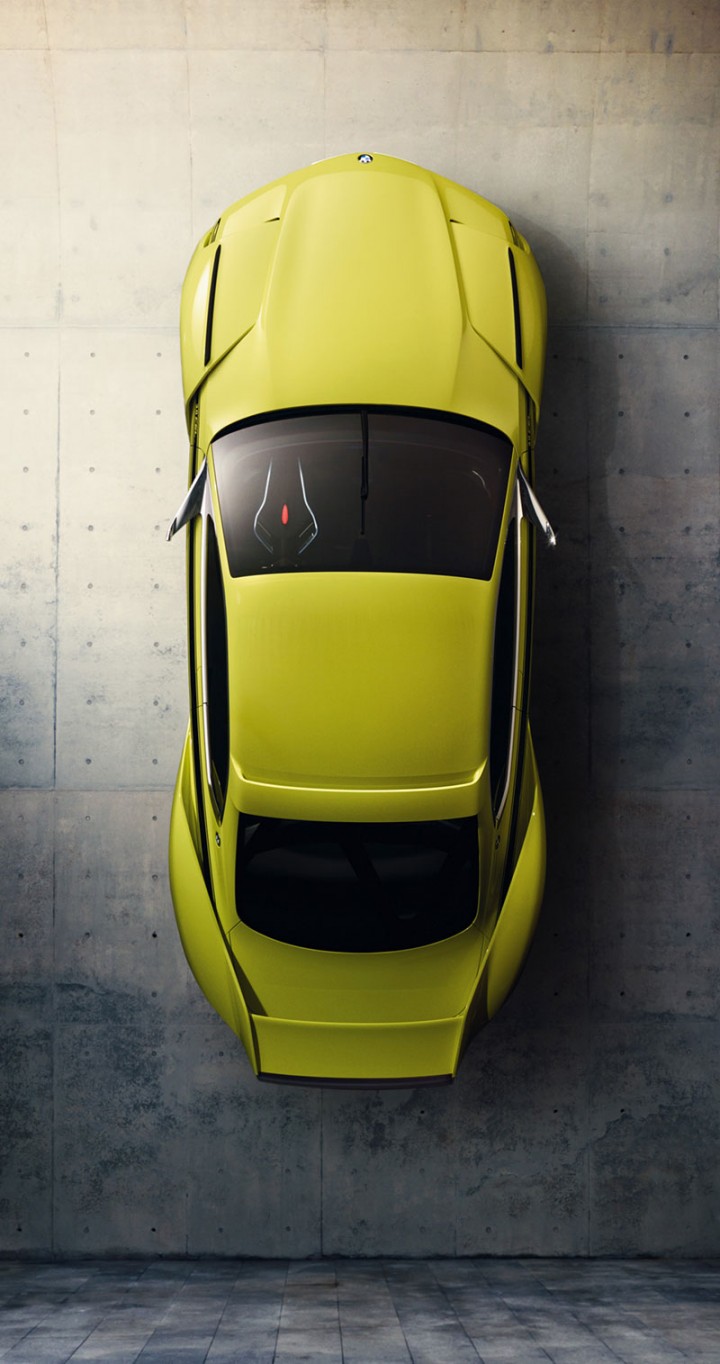 Even viewed from above, the BMW 3.0 CSL is extremely dynamic. From kidney grille to headlamps, the bonnet traces a broad “V” – a nostalgic throwback to a distinctive and dynamic element of earlier BMW coupés. 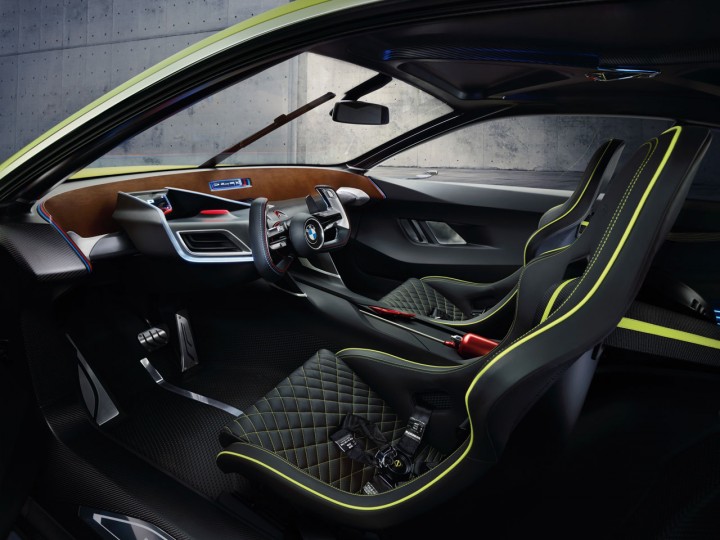 Pared down to a minimum, the interior of the BMW 3.0 CSL Hommage puts its lightweight design on show and renders its racing character elegantly tangible. All interior elements are there out of absolute necessity, every part has a high-quality design, structural or drive-related function. In the all-CFRP interior, the only wood-like presence is the “instrument panel” – a cross-member and purely structural element.

This is a clear reference to the interior of the earlier BMW 3.0 CSL, which featured an all-round wood trim throughout the interior. In the new version, only the small central eBoost charging display interrupts the wooden instrument panel. Infotainment is equally minimalist in concept: a central display on the steering column informs the driver of the current gear, speed, revs and shift point.

Other racing features include bucket seats with high-quality stitching, a six-point belt and red anodised safety features such as the outlet nozzles for the extinguishing foam, the fire extinguisher itself, and the two switches on the centre console for the emergency shut-off and fire extinguishing mechanism.

The only elements in the rear of the vehicle are two helmets integrated into the transmission tunnel. These are held in place by a belt when not in use.

In the place of a rear seat bench, there are only covers for the eBoost energy accumulators. Special reflector technology in combination with LED strips create an impressive 3D effect on the covers.

In its use of cutting-edge materials and detailed solutions, the BMW 3.0 CSL Hommage displays technical sophistication and subtlety of form. Meticulously crafted aluminum sleeves add high-quality accents at the junctions between individual structural elements.

The door design is as minimalist as it is expressive: precise, clean surfaces trace an arc rearwards, lending the door element a flowing, dynamic quality.

The door openers combine a DTM-style pull strap with the elegant handle-integrated opener of the earlier BMW 3.0 CSL, resulting in the hybrid solution of a nylon pull strap located directly behind the grab handle in the door. 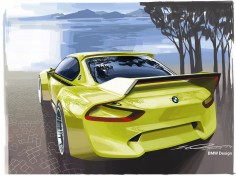 A set of images and photos from the design process of the BMW 3.0 CSL Hommage Concept.