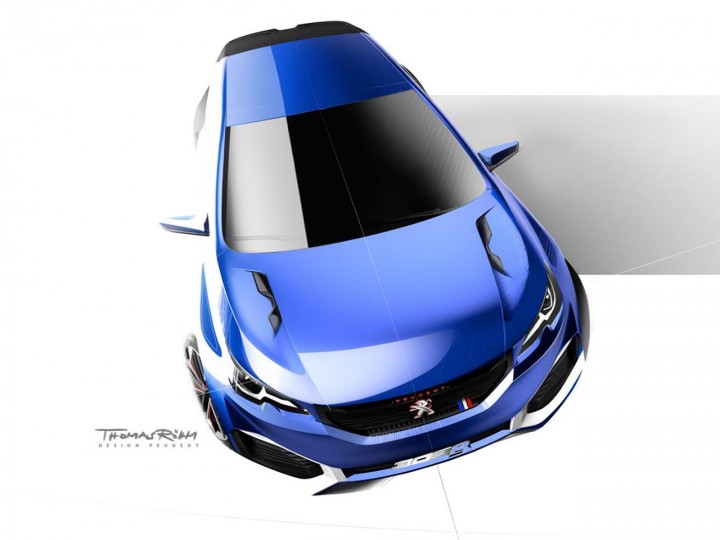 The official information and the exclusive design sketches of the Peugeot 308 R HYbrid, the 500hp, all-wheel-drive concept car developed by Peugeot Sport. 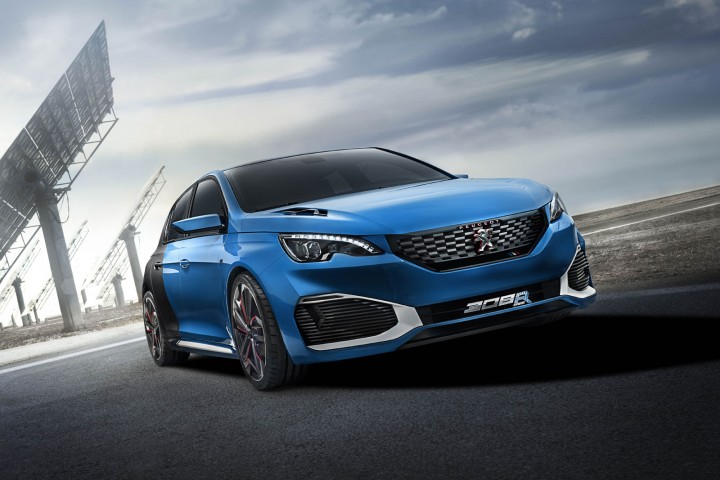 The look of the car includes and evolves elements inspired by the Quartz Concept, revealed at the recent Geneva Motor Show. 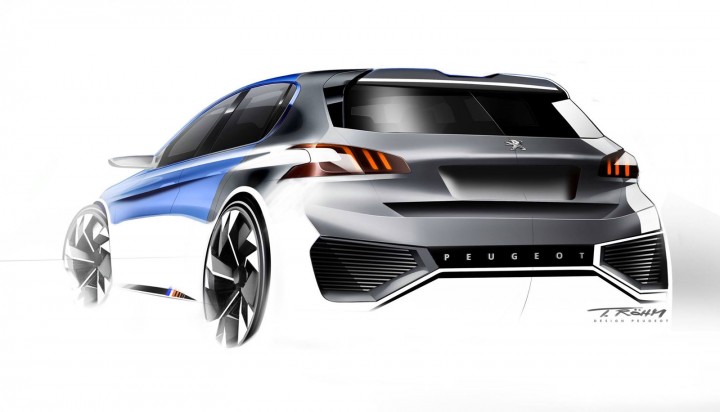 Among the influences are the new front and rear bumpers, with large hexagonal air intakes and a design defined by angular lines; the distinctive front grille with its chequered pattern; the louvres on the hood; and the rear narrow spoiler at the top of the tailgate. 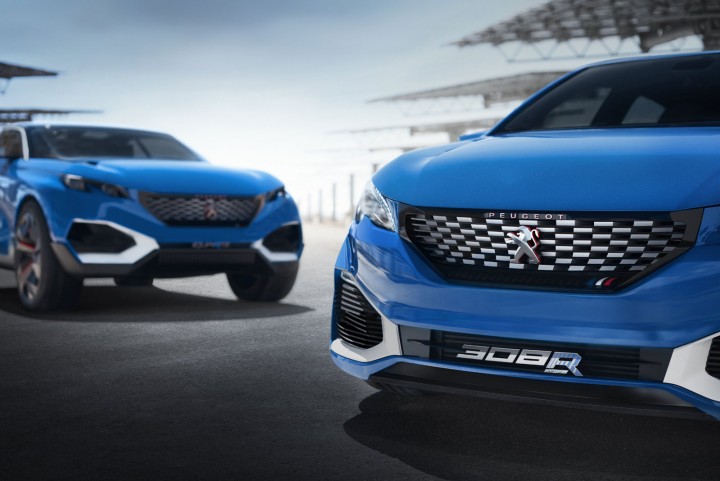 The color scheme combines a blue paint with fluorescent pigments and glass particles with a rear section finished in matte black – a livery similar to that introduced with the 308 R Concept. 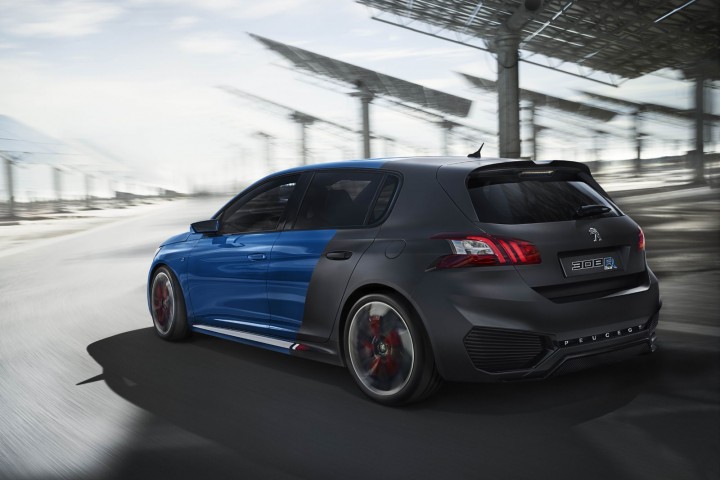 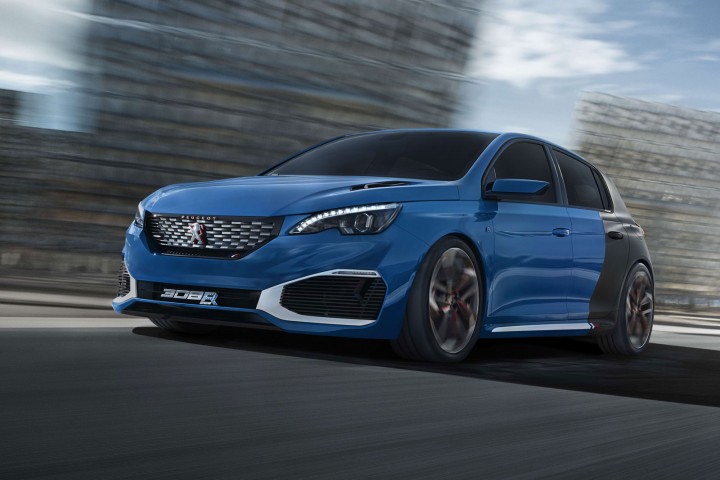 The blue color recalls both the hybrid powertrain and the shade historically reserved for French competition vehicles. 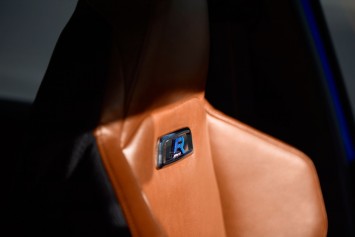 Inside, the car has the same ‘i-Cockpit’ instrumentation of the standard 308.

Among the new features are the four individual sports seats, upholstered in fawn-colored patinated leather, upper fittings and roof lining in slate grey and sporty red touches, for example in the dials, steering wheel center marker and central console.

The dashboard is covered in a fabric produced using a digital weaving technique – an innovative material that can be used to produce large and complex parts that are soft to the touch with no need for foam, which helps saving weight.

The instrumentation is completed by the head-up display and two buttons on the central console that allow the driver to activate the powertrain and select one of the four driving modes.

The plug-in powertrain combines three sources of power, each capable of moving the vehicle independently of the others. 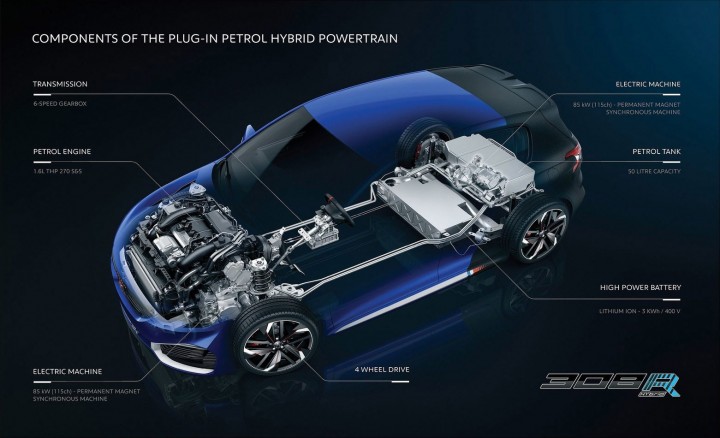 They are a four-cylinder 1.6-litre THP 270 S&S petrol engine, plus two electric motors – each with power of 85kW/115hp – mounted one on each axle. The front one is linked to the six-speed gearbox.

To improve handling, the car’s weight has been optimized and placed as low as possible. The lithium-ion 3kWh battery has an excellent ratio between power and size, and is housed under the rear seats in place of the fuel tank.

In turn, the 50-litre tank has been placed in the boot above the rear electric motor and two transformers.

The braking system features 380mm ventilated discs at the front, gripped by four pistons, and 290mm discs to the rear.

The deceleration also uses the electric motors throughout the full speed range, which helps preserving the discs and pads, and uses regenerative braking to recharge the battery.

The battery can also be recharged using the front electric motor as a generator, driven by the petrol engine, or through a rapid recharging terminal, which restores the battery to its maximum power in just 45 minutes. 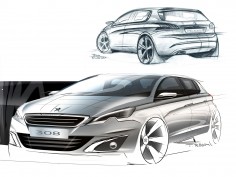 The official design sketches of the new Peugeot 308, the new-generation compact hatchnack set to make its debut at the 2013 Frankfurt Motor Show. The set of images reported below includes exterior sketches by Peugeot Senior Exterieur Designer Thomas...