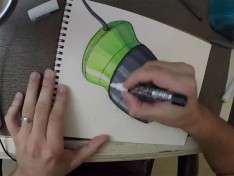 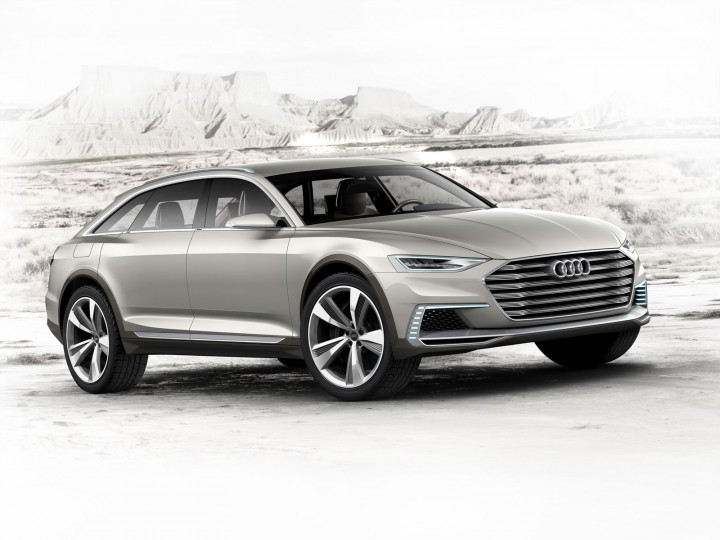 Making its premier at the Shanghai Show, the Audi Prologue allroad applies the brand’s future design DNA to the trademark all-terrain models.

Like all allroad models, first introduced fifteen years ago with the Audi allroad quattro, the latest evolution of the Prologue Concept features a raised body (77 higher than the Audi prologue Avant), and a protection running along the entire bottom edge. 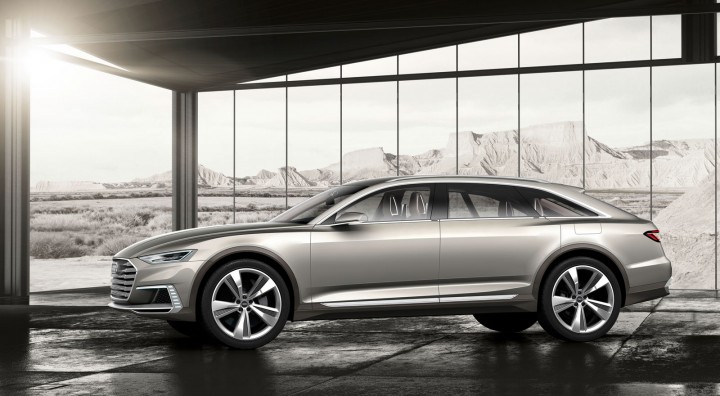 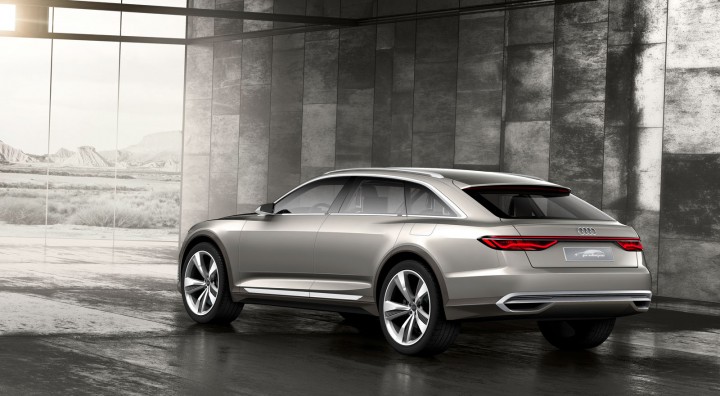 Below we report the official design details from the press release. Also check the gallery of design sketches. 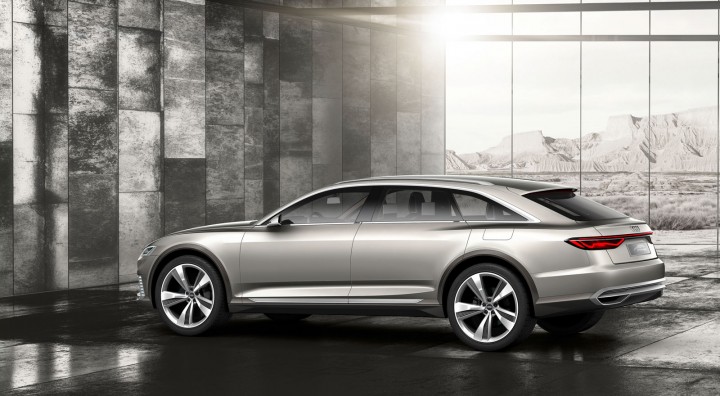 Viewed from the side, the 5.13 meter (16.8 ft) car is characterized by a long front-end, a roofline that quickly begins to drop again and extremely flat D-pillars give it an athletic profile. 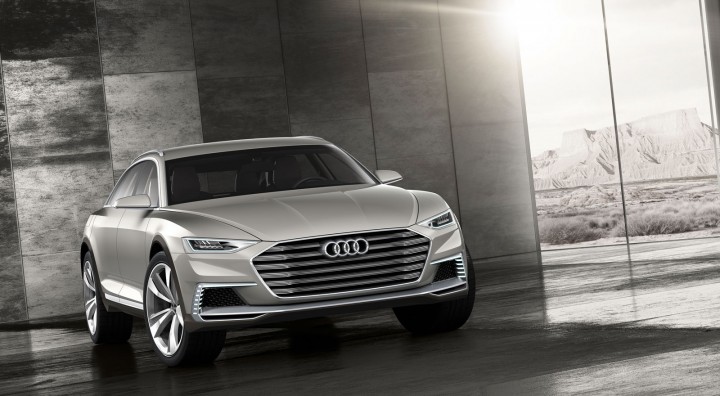 The show car, demurely finished in Dehua White, is a stage for progressive elegance in every detail. The window capping strips include sensor surfaces for the door locks; the covers for the charging port and fuel tank are also electric.

Aluminum accents the roof rails, the mirror housings, the area around the windows and both the front and rear of the car.

An extension offset in gray runs along the wheel wheels and the entire bottom edge of the raised body. It expresses the robustness of the car and makes it seem even wider.

A flat and wide Singleframe grille dominates the front. It is flushly integrated into the body of the automobile. With their cohesive appearance, its brushed aluminum crossbars create a new variant of the Audi e-tron look.

The show car’s wedge-shaped headlights feature Matrix laser technology, an innovation that further extends Audi’s lead in lighting technology. The light is broken down in to countless tiny pixels, and the possibilities for distributing this light are virtually boundless. LED light guides sketch a new e-tron light signature at the upper and outer edges of the air inlets, which are bisected by the bumper blade.

The rear of the Audi prologue allroad is strongly drawn-in laterally and as with a yacht is tilted in the direction of travel, giving the show car a dynamic appearance even when standing still. A narrow strip of lights connects the LED rear lights.

Their housings are made of 3D glass producing three-dimensional, sculpted effects. The sporty rear apron includes flat, horizontally split opening on both sides that graphically integrate the exhaust system into the rear-end design. This detail symbolizes the drive concept of the Audi prologue allroad – the efficient interplay of combustion engine and electric motor. 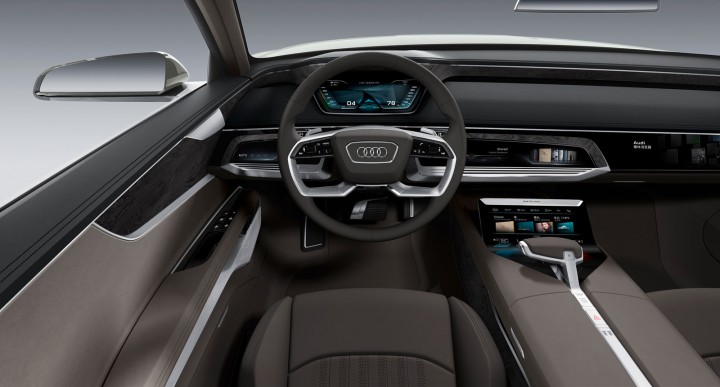 Inside, lithely drawn lines and slender geometric bodies convey the impression of expanse, serenity and lightness. 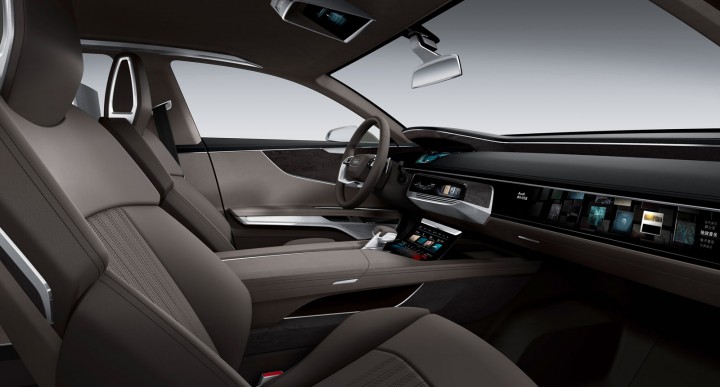 The continuous center console and the front seats appear to float. The instrument panel features a strictly horizontal orientation. Its upper level is part of the wraparound – the arc encircling the cabin and the luggage compartment. A perforated trim panel covers the broad air vent; it retracts as soon as the air-conditioning is set higher. 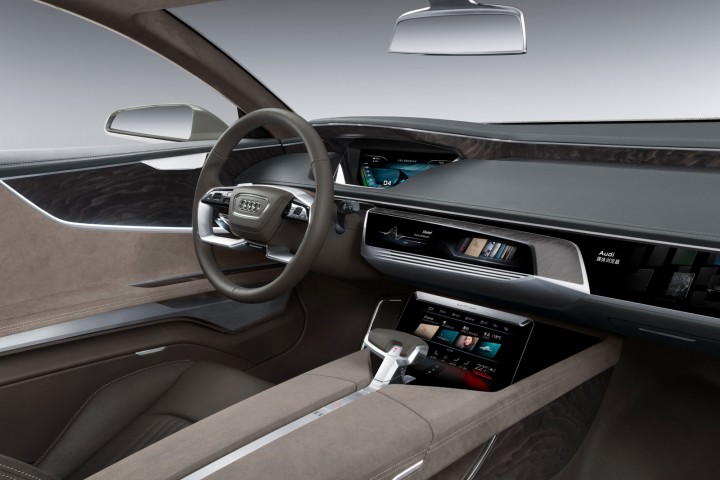 The interior architecture of the Audi prologue allroad merges with a groundbreaking new display and operating concept. Across its full width, the front of the instrument panel is designed to be a display surface which integrates three touch displays. 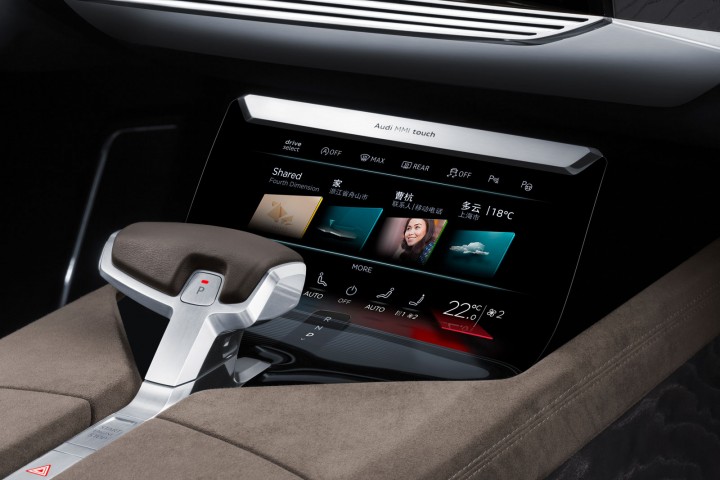 When inactive, the display is in a flat retracted position; as soon as the car is started, it moves up at an angle.

The brand with the four rings is also breaking new ground with the Audi virtual cockpit future, which lies in the driver’s field of view. High-resolution displays and three semi-transparent mirrors generate a virtual visual stage with three levels. Thanks to this staggered approach, information is structured better and is easier to grasp.

Rear passengers in the Audi prologue allroad sit in individual seats. They use an additional OLED display on the center console to adjust the seats, the climate control system and the infotainment for their area or to exchange data with the driver. 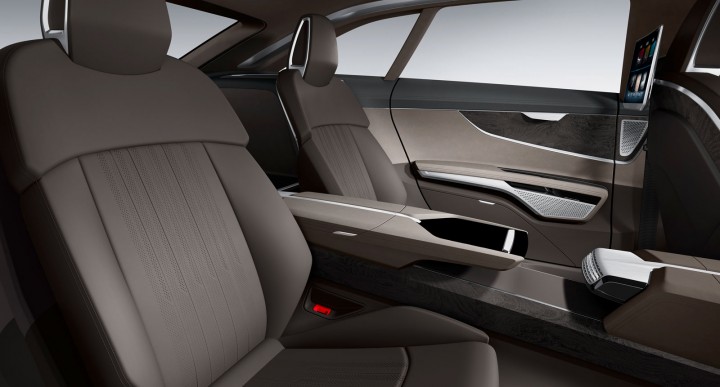 When the audio system is switched on, a sound spoiler moves out of the rear wheelhouse panelings, homogeneously distributing music in the interior in top quality. Two Audi tablets, which can be mounted in the backs of the front seats, also use OLED technology. They are extremely thin and slightly curved.

The show car offers its driver and passengers superior comfort before the car even begins to move. The “butler” – an innovative, intelligent software program – identifies the passengers based on their smartphones and adjusts the seats and climate control system according to their preferences. The system also makes suggestions for music and route planning according to the owner’s preferences. The Easy Slot system in the center console connects the phones with the onboard infotainment system and charges them inductively.

The color and trim concept in the interior of the Audi prologue allroad emphasizes comfort and sporty elegance. The upper section of the instrument panel is finished in Lifestyle Blue, while the lower zone, the seats and the carpeting are Sard Brown. Bezels of open-pored, dark fine-grain ash veneer adorn the wraparound, the doors and the center tunnel console. Aluminum elements set powerful accents.

Natural-looking Unicum leather is in large sections of the instrument panel, on the center console tunnel and on the seats. Artfully designed perforations in the seat center lines are evocative of the Singleframe grille bars. A generous band of Alcantara runs from the door inserts over the arm rests to the luggage compartment.

The lithium-ion battery mounted in the rear of the car has a capacity  of 14.1 kWh for a purely electric range of 54 kilometers (33.6 mi). With its AWC (Audi wireless charging) technology which the brand is developing for series production, the Audi prologue allroad can also be charged inductively.

The front and wheel axles are lightweight, five-link constructions. The 20-inch brake discs are made of weight- saving carbon-fiber ceramic. The adaptive air suspension sport – an air suspension system with controlled damping – offers a wide range between extremely comfortable cruising and tight handling. The dynamic all-wheel steering combines a variable-ratio, dynamic steering unit with an additional steering unit for the rear wheels to harmoniously resolve the conflict between dynamic driving and stability. 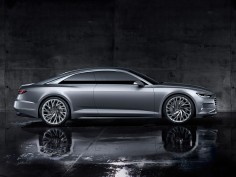 At the 2014 Los Angeles Auto Show Audi has unveiled the Prologue, a design study of a luxury coupé that previews the brand's design direction for the future. 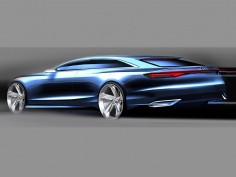 Auto Express has published a set of official sketches and renderings that preview the estate version of the Prologue Concept, expected to debut at the upcoiming Geneva Show.