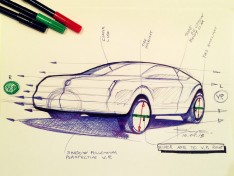 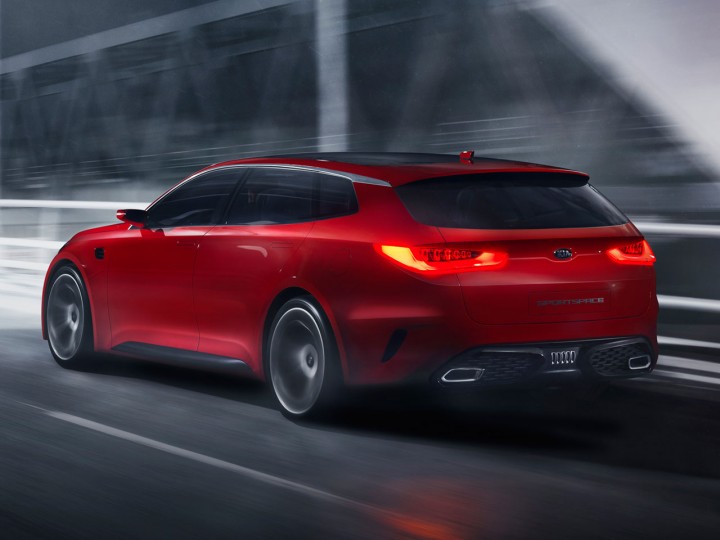 At the 2015 Geneva Motor Show Kia has unveiled the Sportspace Concept, a muscular, dynamic four-seat tourer designed for European tastes.

The Sportspace was conceived and developed at Kia’s European Design Centre in Frankfurt under the leadership of Gregory Guillaume, Chief Designer Europe. 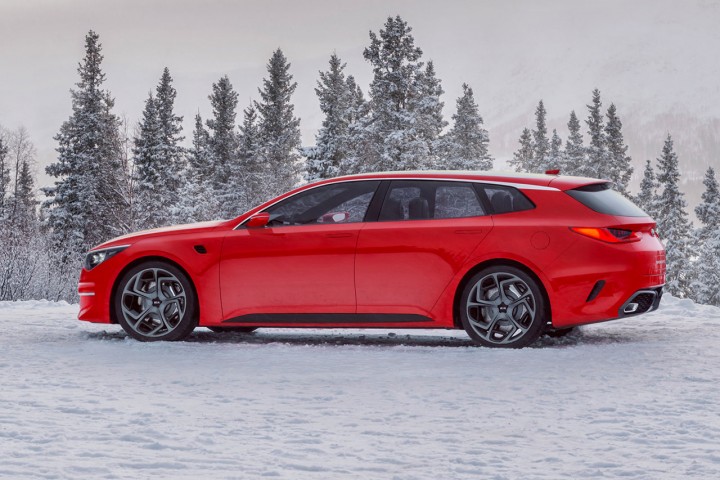 It is defined by Kia as a mix of a wagon, a hatchback and shooting brake.  The proportions feature a long and lean profile with unbroken surfaces, emphasized by a very forward-positioned D-pillar and almost hatchback-like rear door arrangement. 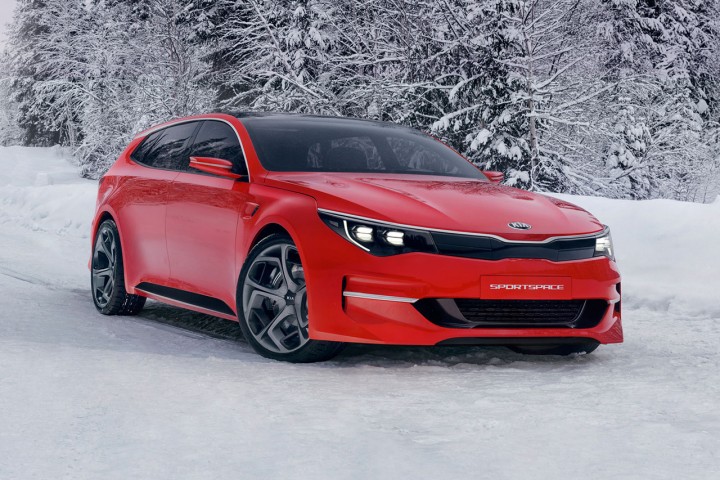 Gregory Guillaume comments: “The normal wagon treatment would include a long third window to suggest and show the luggage carrying capacity. But by applying a strong D-pillar treatment and a much more swept back rear hatch, we have given the back of the car a strong character – muscular and athletic. It has great power and strength within its mass. 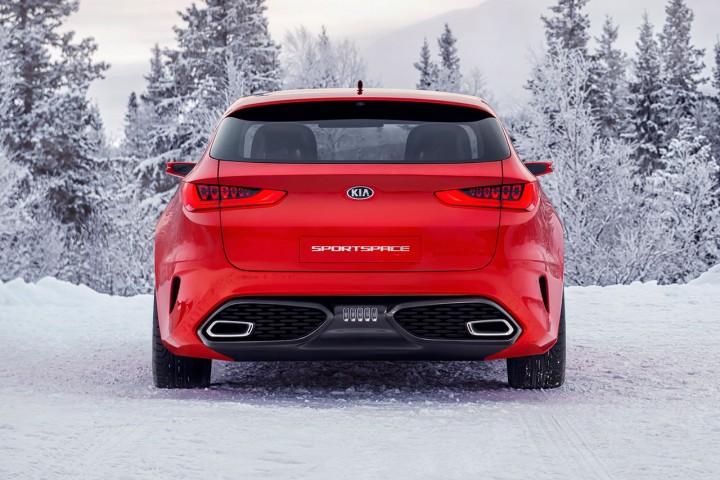 “The visual weight of the rear is reduced with careful shaping of screen, door and rear bumper. The edges cut into the mass to make its raked appearance believable and less wagon-like.” 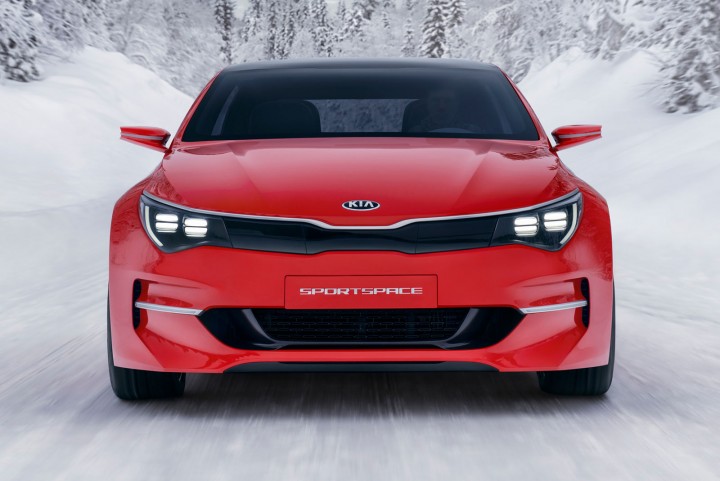 At the front, the Sportspace showcases an evolution of Kia’s signature ‘tiger-nose’ grille, while the rear end is characterized by tapering side surfaces, a concave tailgate and a distinctive full-width carbon-fiber diffuser that together with the wide rear tail lamps and further emphasize the car’s wide stance and sporty look. 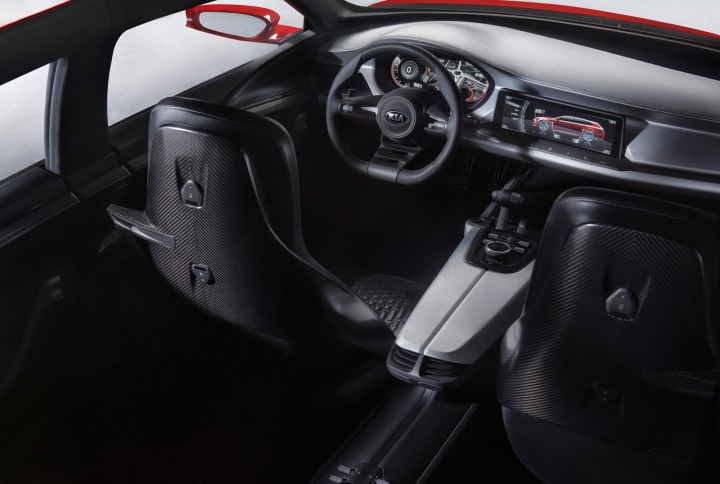 The four-seat interior features panoramic glazing running the entire length of the roof and makes use of  luxurious leather combined with contemporary technical materials – including carbon fiber and milled, anodized aluminum. 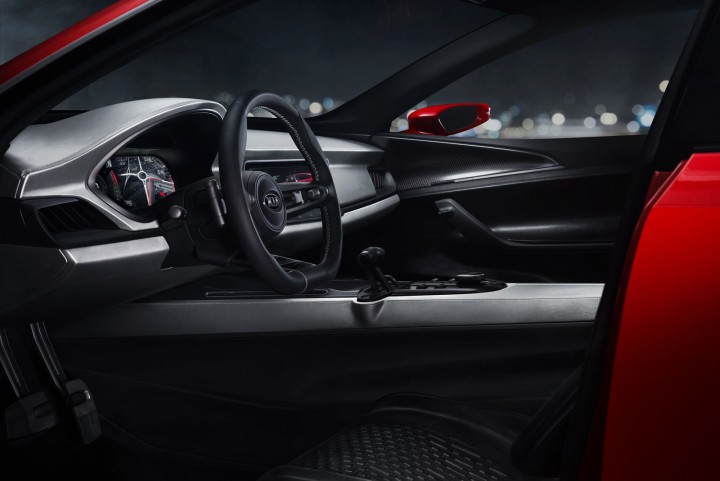 Below we report the official design story.

Speaking about the concept behind the Sportspace, Guillaume is open about its origins: “Kia does not have a wagon in this important segment of the European market, but I was determined that we would not simply create something that conformed to tradition. This car comes from an ambition I had when I was studying design in Switzerland as a young man.

“I always had this picture in my mind of creating a vehicle that I could have used to go for a weekend’s skiing with friends before driving back for it to be displayed at the Geneva Salon. Geneva is a special show for me – it comes as winter starts to release its grip. It has a special atmosphere and a particular appeal. The ideal concept vehicle had to reflect this – and I believe the SPORTSPACE does just that!” he added.

At the front the apparently solid Plexiglas insert is actually louvred and these can rotate to allow greater air intake when required.

A satin aluminium strip runs across the front of the bonnet above the ‘ice cube’ LED headlights, giving a sense of strength and determination. The subtlest of curves along the underside of the headlamps, add further visual movement to the SPORTSPACE’s bold, dynamic face.

In profile, the Kia SPORTSPACE is just as vivacious. A strong character line runs along the body, visually connecting the front and rear. The car’s high beltline, the simple yet gracefully shaped flanks and the low-down inset carbon fibre kick-plate add to the sense of athletic muscularity.

Further dynamism is added to the car’s ‘Ignition Red’ bodywork by another satin accent strip, a spear of aluminium which arcs from front to rear, accentuating the car’s long and narrow glasshouse. A horizontal turn signal is inset in each of the side mirrors and mimics the front spoiler indicators.

The design of the rear pillar, which is wider and slopes forwards, is combined with tapering side surfaces and a dramatic concave tailgate, ensuring the car is just as bold and exciting at the rear.

The wide rear tail lamps and a full-width carbon-fibre diffuser further emphasise the car’s wide stance and sporty appeal. The tail lamps incorporate the turn indicators, which pulse outwards when in operation.

A roof-level spoiler and the diffuser maximise air flow efficiency around the rear of the car. Twin tailpipes within the diffuser echo the polygon shape of the tail lamps. A vertically oriented fog lamp is integrated centrally in the diffuser.

The SPORTSPACE is finished with unique 20-inch ten-spoke alloy wheels inset with carbon fibre which emerge from a pentagonal hub at the centre. The wheel design suggests powerful rotation even when stationary.

The door handles sit flush in the panels until required. When operated they reveal a remarkably airy four-seat interior illuminated by panoramic glazing running the entire length of the roof and bathing the cockpit with light.

Guillaume comments: “The SPORTSPACE has to be purposeful and for me that means a very black interior with the focus on control and function – but the ambience of the passenger compartment must also be refined, relaxed and a welcoming place to be. The sense of space was essential, and whether the SPORTSPACE is being used during the working week or on that getaway, it has to convey quality and adaptability by providing occupants with a practical personal environment that delivers individual needs and preferences.”

The cabin is simple and pure with bold, handsome styling. A balance of luxurious leather with contemporary technical materials – including carbon fibre and milled, anodised aluminium – underlines the car’s inherent functionality with utterly modern and evocative style.

“The cockpit is defined by clean and simple volumes, ‘grand gestures’ and detailing that doesn’t detract from the whole,” says Guillaume. “The floating instrument panel is extremely horizontal and its width is accentuated by the anodised aluminium bar below it that links the side air vents. There are no central air vents in the instrument panel – instead they are set into the centre tunnel below.”

The inner surfacing of the door panels runs as one whole architectural sweep from the instrument panel rearwards into the tailgate. The centre console runs through the interior, shooting through the car, further enhancing the perception of space and length.

The hand woven ‘cuoio intrecciato’ seats are trimmed with black-polished leather backed with carbon fibre shells and provide modern and comfortable sport seating for each of the four occupants. The finely formed, free-standing metal door pulls are satisfyingly cool and shaped to the hand. Ergonomically set into the door pulls is a switch to allow the side windows to be ‘thumbed’ up or down.

Ahead of the driver is a highly configurable digital instrument cluster paired with a fully operational infotainment system. The large infotainment screen – which sits clearly within the driver’s view – can be operated in single or split-screen modes. Operation is via the anodised aluminium in-car infotainment controller located behind the gear shift – flanked by four shortcut buttons that enable fast and intuitive interaction. Additional functions can be operated via a row of fast access buttons integrated below the centre screen.

Where the rear view mirror would usually be located, a slim screen replaces it, fed by images from the rear view camera. Other driver information is also fed into this screen.

“We were able to integrate very technical detailing into the car and this helps to intensify driver involvement,” explains Guillaume. “The car, in the sense of its grand touring practical sports role should be a serene and comfortable place. It shouldn’t be distracting in any sense. As a driver, all of the controls and the things you need are directly around you and easily to hand and extremely positive and technical.”

Generous rear seat legroom maximises passenger comfort and heightens the sensation of spaciousness, enhanced by the substantial glazing above.

A prerequisite for an exciting grand tourer like the Kia SPORTSPACE is the capacity to accommodate skis. Skis can be stored between the rear seats, with a padded leather armrest doubling up as a ski rest. Slide it back and two recesses are revealed which accommodate two tablet PCs, one for each passenger. Rear seat occupants also have the option to utilise a unique tablet PC clamping system located on the back of the front seats, allowing them to view video and other multimedia content at eye level.

The rear section of central tunnel seamlessly connects to the boot space. An innovative loading system comprising 28 rolling balls is set within the matt leather trunk floor. In combination with the low tailgate, these allow the easy loading of heavy suitcases and sport equipment. When the SPORTSPACE’s ignition is switched on, each of the stainless steel balls lowers into its recess by 3 mm, ensuring cargo doesn’t slide when the journey begins.