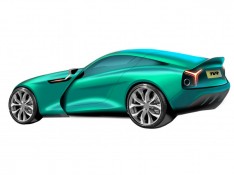 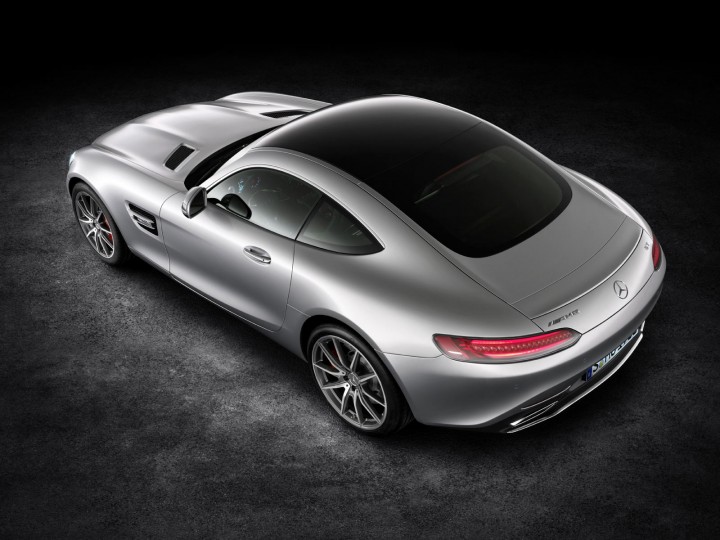 Mercedes-Benz has revealed the Mercedes-AMG GT, the new V8-powered sportscar that replaces the SLS and introduces a new, more sensual design treatment and a more compact package.

Developed entirely in-house by AMG, the new Mercedes-AMG GT measures 4,546 mm in length, 1,939 mm in width and 1,289 mm in height – with minimal front and rear overhangs and a wheelbase measuring 2,630 mm. 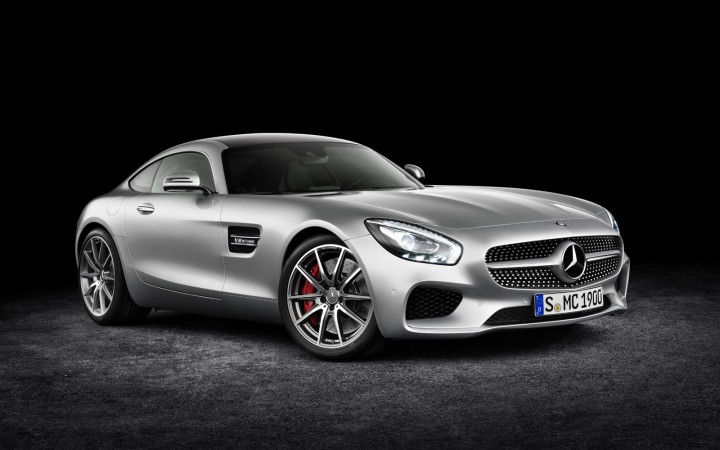 Compared to the SLS AMG GT, the new sportscar is more compact: it has the same width, but the length has been reduced by 92 mm and the wheelbase by 50 mm, while the height has increased by 27mm. 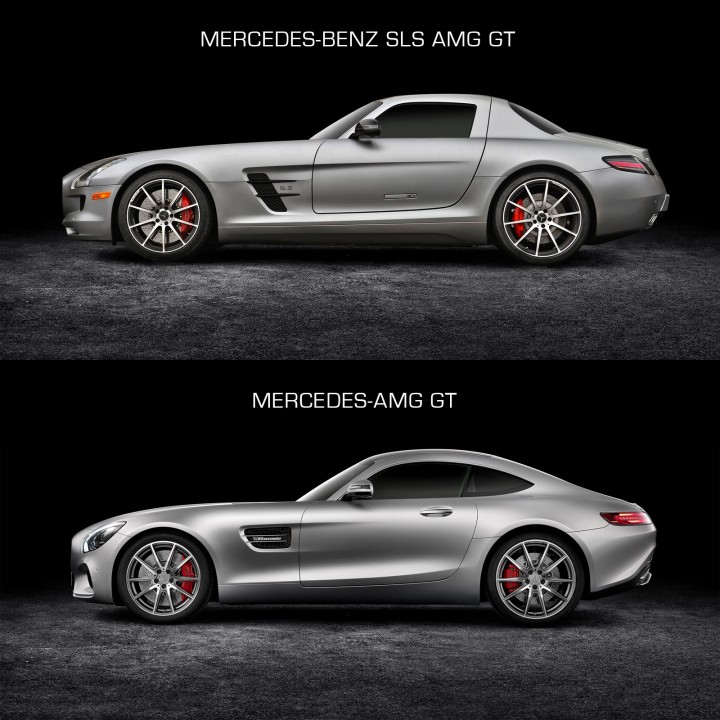 The surface treatment uses sensual, curved surfaces, with an arched roofline that gently extends to the tail, with more than some reminiscences of the trademark 911 profile. 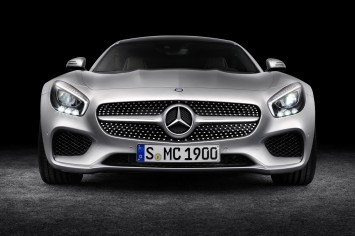 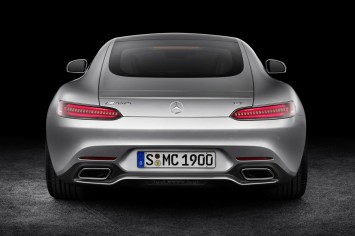 The front end adopts the design DNA of the current model line-up, with curved air intakes and grille, while the hinted powerdomes on the hood recall the iconic 300SL. 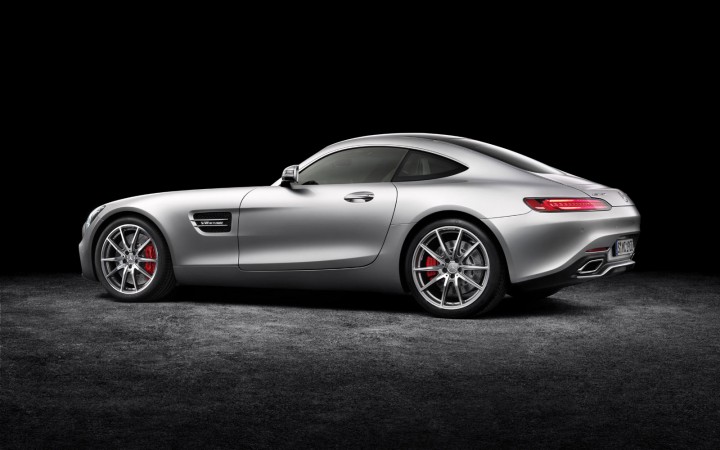 The interior combines premium materials – nappa leather, carbon and aluminium – with a design that evolves the layout and styling of the SLS AMG GT cabin. 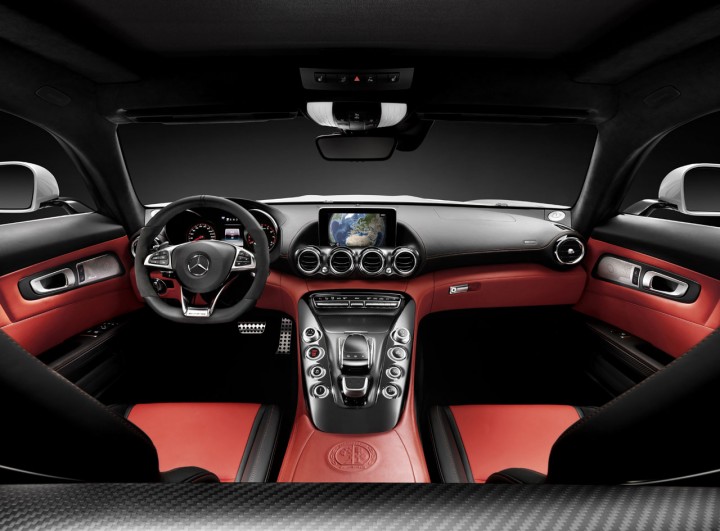 The main design elements are the large center tunnel/console and the distinctive circular air vents, while the infotainment system features a 8.4-inch display. 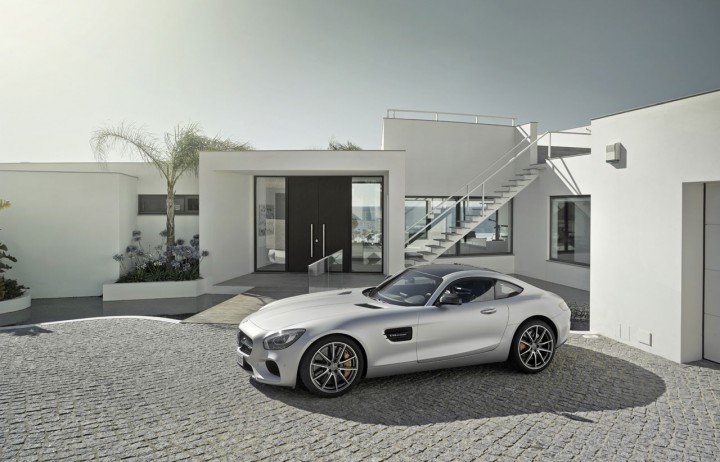 Gorden Wagener commented: ‘The new Mercedes-AMG GT is a sports car in its purest form – breath-taking proportions, powerfully sculpted surfaces and flowing lines turn the new AMG into a contemporary sports car which embodies the spirit of the glorious Mercedes sports cars from the past. The GT is a consummate combination of beauty and intelligence.’ 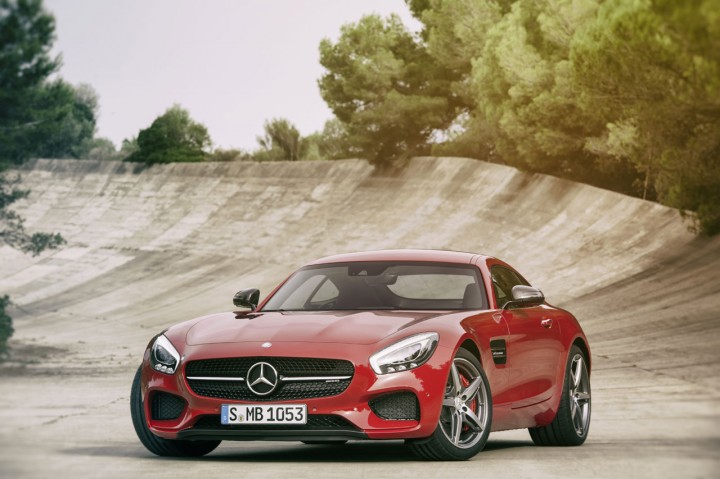 Among the technical highlights is the aluminium space frame structure weighing 231 kg which allows to achieve a total kerbweight of 1,540 kg.

The sportscar will be available with a choice of two variants of a new AMG-designed, hand-built, biturbo 3,982 cc V8 engine with differing power outputs – the 462 hp GT and the 510 hp GT S.

The GT and GT S will go on sale in Spring 2015. Prices will be announced in October.

Below we report the official design details from Mercedes-Benz’s press release.

The new Mercedes-AMG GT embodies the sensual purity of sportiness and emotion. The two-seater is characterised by hallmark rear-wheel-drive proportions. The V8 biturbo front mid-engine ensures optimum weight distribution, which forms the basis for superb driving dynamics. The long bonnet with its pronounced powerdomes, the greenhouse which has been moved far back, the large wheels and broad tail end make up the distinctive looks. The large tailgate conceals a practical luggage compartment.

Positively arched surfaces give the Mercedes-AMG GT its sensuous character and the appearance of a sculpture. Viewed from the side, the dome-shaped, arched roof line and the frameless doors are eye-catching features. A muscular element sculpted out of the side wall creates a sense of lightness and dynamism, even when the vehicle is at a standstill. The surfaces and lines of the side wall flow into the rear-end with a dramatic tapered effect. The GT deliberately avoids lines in the shoulder region. The only line is one lower down, picked up again in the rear bumper, which stretches the body and makes it appear lighter. The side air outlets, each with two fins, represent a typical, styling feature of Mercedes-Benz sports cars. The GT has no visible aerials which could disrupt the overall appearance.

The creative interaction of diverse design elements lends the coupé a superior, self-confident front: the three-dimensional diamond radiator grille with central Mercedes star, a broad louvre and AMG lettering stands in the centre of the front end. LED High Performance headlamps with stylised “eyebrows” as daytime running lamps, side lights and indicators, as well as three separate high-beam reflectors lend the GT its characteristic look.

Large air intakes optimise the flow of air to the cooling modules. The A-wing with front splitter in the lower third of the front apron, a characteristic feature of AMG vehicles, makes the sports car appear low-slung and wide. While the front splitter is painted in the body colour on the GT, it comes with a high-gloss black finish on the GT S. Overall, customers can accentuate the exterior design according to their personal preferences: options available include the Exterior Silver Chrome package, the Night package and the Exterior Carbon-Fibre package.

With its base areas, broad shoulders and narrow tail light graphics, the rear area creates an emotional overall appearance. The licence plate bracket is located in the lower part of the bumper, allowing the Mercedes star to be placed prominently on the smooth-surfaced boot lid. Added to which is an extendable rear aerofoil, which is concealed from view while the car is at a standstill. The black diffuser insert with tailpipes integrated into the bumper and the trim strip in matt iridium silver inspired by the A-wing in the front create a visual sense of lightness across the entire tail end.

Flat, wide tail lights with new sequential turn signals reflect state-of-the-art technology. 18 individual LEDs on each side indicate where the driver intends to turn by sequentially illuminating them from the inside to the outside.

The tail lights underline both the sporty styling of the rear, as well as the attention to detail and sophistication – form and function combine in a unique way to create a perfect unit.

The interior design also embodies maximum emotion and sensual purity. Radically low, sporty proportions create a unique sense of spaciousness. Clearly drawn components and their authentic materials underscore the dynamic character and create instant excitement: Anyone opening the door discovers an exciting interplay between the deep, sloping dashboard and a dominant, arched high centre console, a design which evokes emotions and impresses with its perfection.

The central “aviation design” theme, which is the hallmark of Mercedes-Benz sports cars, has been restyled. The extreme emphasis on the width of the dashboard, which creates an impression of a powerful wing, dominates the cockpit of the GT. Four central spotlight-style vents and the individual vents at the right and left ends of the dashboard reinforce this impression. In conjunction with the high beltlines, the concave-shaped door panelling and the dynamic centre console, the GT comes across as a genuine driving machine and consummately integrates the driver into the cockpit thanks to the low seat position.

The dominant centre console appears to be a feature lifted straight from motor racing by virtue of its styling that is reminiscent of a NACA air intake, as well as the surfaces and authentic materials that have been used – there is a choice of silver chrome, matt carbon fibre, high-gloss carbon fibre, black diamond and matt silver fibreglass. Positioned centrally, the free-standing central display is an eye-catching feature. Attention to detail is also echoed in the AMG DRIVE UNIT controls: they are arranged like eight cylinders in a V layout, emphasising the powerful and high-tech impression made by the centre console.

Outstanding precision and a superior quality feel thanks to the finest materials with superb workmanship are also apparent on the sports seats, the performance steering wheel and the instrument cluster. The most important control for sports car fans is located in the AMG DRIVE: the button for starting the engine, which is labelled “Engine Start Stop” and illuminated in red. 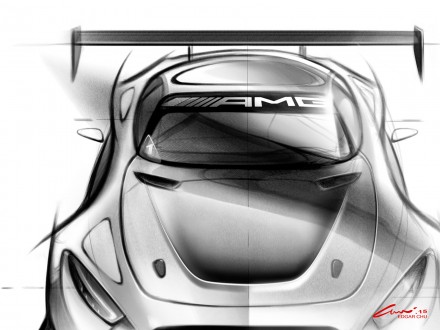 The sports car and performance brand of Mercedes-Benz has presented a couple of sketches that preview the upcoming next stage of the FIA GT3 race car.