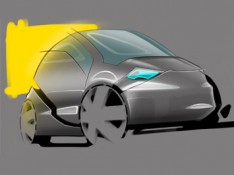 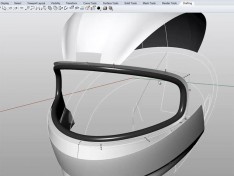 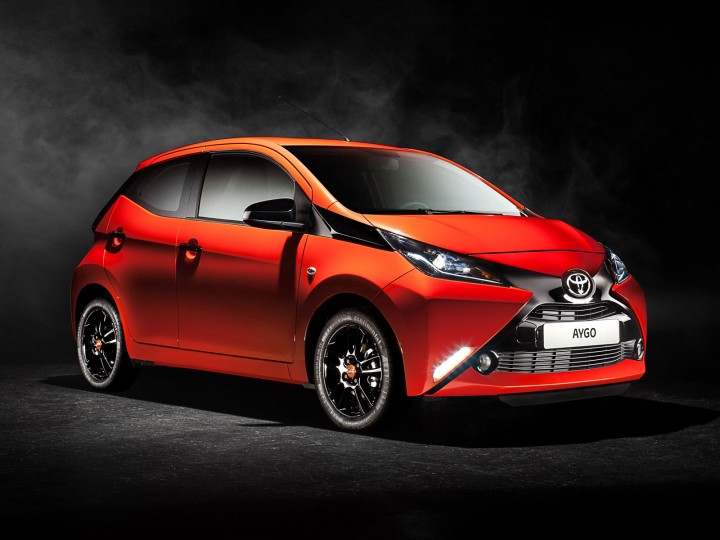 Toyota has released a short video and new details on the design of the new-generation Aygo, which debuted at the recent 2014 Geneva Motor Show.

The 2nd generation Aygo was unveiled at the past Geneva Motor Show and compared to the outgoing model it features a new, bold design identity, strongly differentiated from the C1 and 108 sister models. 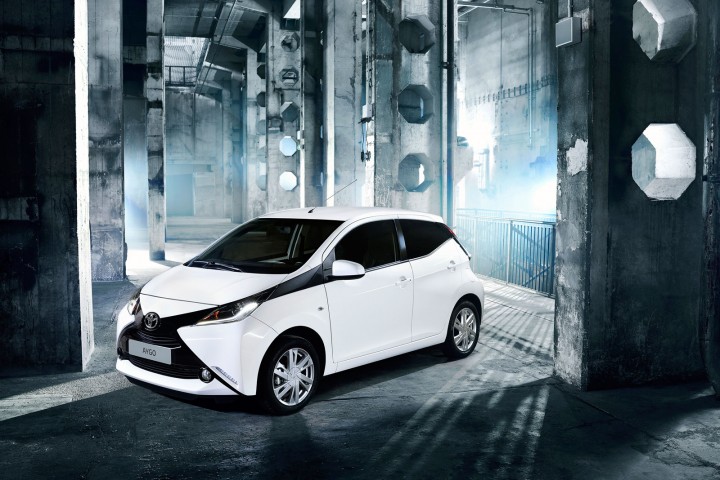 The overall length has been increased by 25 millimiters, up to 3.45 meters. The overall look is characterized by a bold contrast between the painted body panels and the dark surfaces of the DLO, wheels, the front grille and fascia, and the rear hatch and lower bumper area. 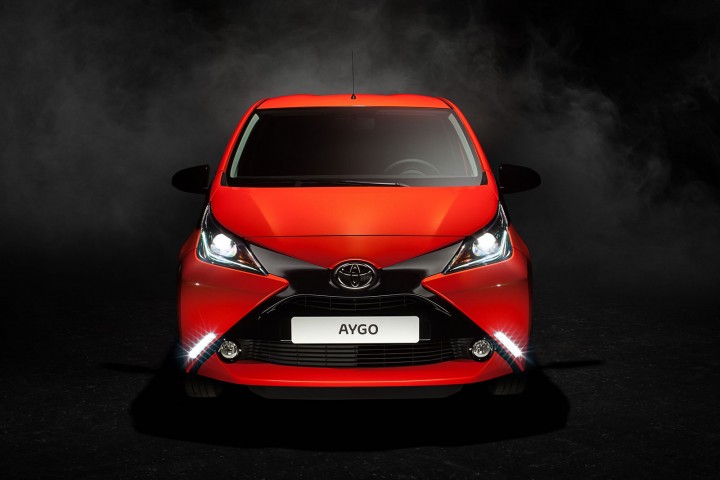 The face features a bold X-shaped graphic theme, with the upper lines that span across the car’s flanks defining the side windows lower edges. 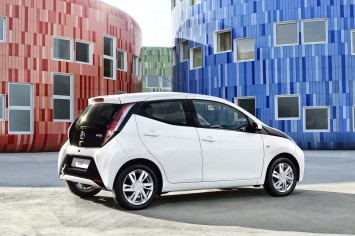 The height has been slightly reduced, which in conjunction with many aerodynamic improvements has resulted in a lower drag coefficient – from Cd 0.30 to 0.29.

The surface treatment adopts tight, angular lines which departure from the soft surfaces of the previous generation and the relatively rounded shapes of the Citroën C1 and Peugeot 108.

The interior features an advanced infotainment system with a 7-inch touch display. The production model will be availble with a wide range of customization options. 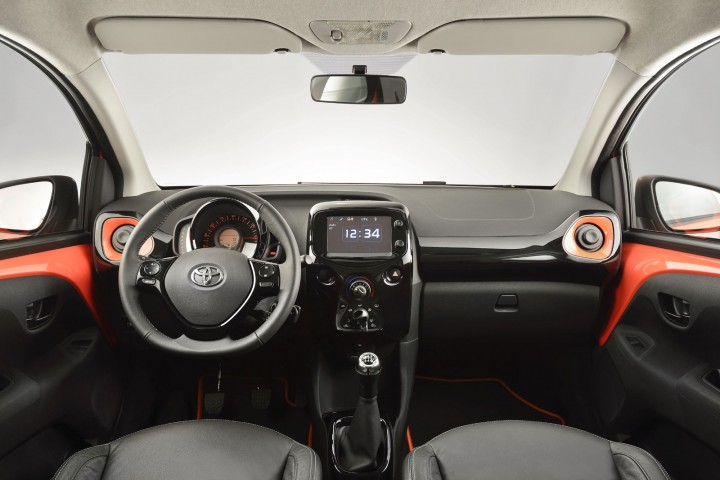 Below we report the new video on the design , some official design statements and additional details. 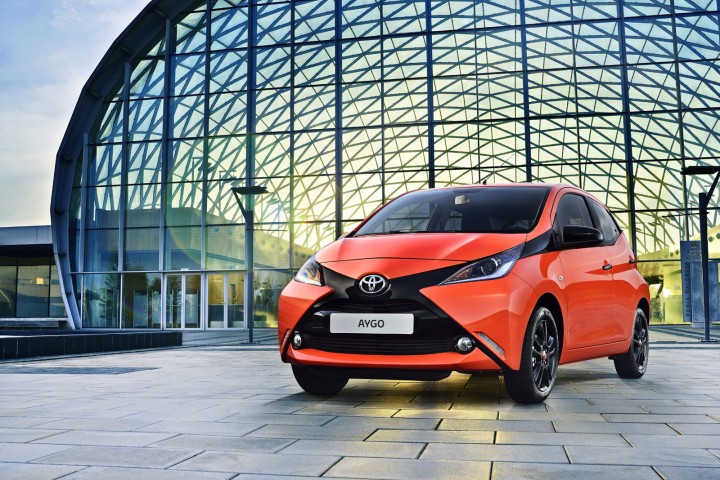 “Every time you look at your new car parked out front, you want to be reassured about the choice you’ve made. That’s why we didn’t accept any compromise when it came to styling.”

There’s no escaping the impact of new Aygo’s appearance, a look that’s been influenced by the bold shapes and forms of hip Japanese youth culture – tagged “J-Playful” by Toyota.

But for all its compact size and appealing look, it’s no less robust – a balance that presented a big challenge to the design team. 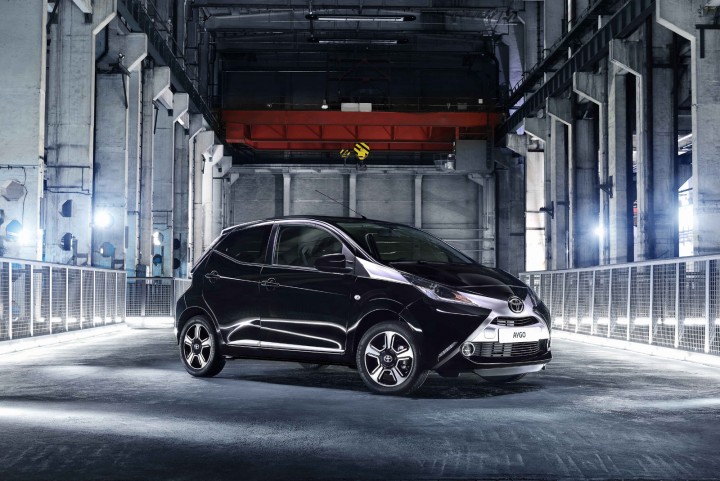 “Designing a compact car like this isn’t easy. You want it to be loveable, but at the same time it needs to have proper street credibility. So it should look solid and strong, and have real road presence,” says Nakamura-san, adding that this called for some “tough choices”.

“For example, for the headlights to be narrow enough to sit within the X-graphic, they had to incorporate projector technology. This is exceptional in the A-segment, which tends to favour the cheaper, but larger reflector type. This is a good example of how we rejected compromise to end up with a better car.”

Where the interior’s concerned, there was a major focus on ergonomics, as Chief Engineer David Terai explains: “We were mindful of the younger type of customer we see in the segment, so we improved the driving position by reducing the steering angle and lowering the front seat hip pint. We also equipped the driver’s seat with height adjustment, so finding your preferred position at the wheel should be easy.” 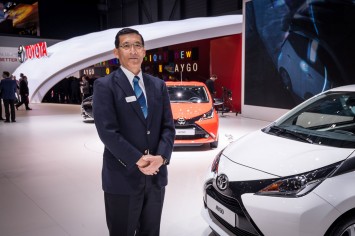 Chief Engineer David Terai says new Aygo had to be much more than a practical run-about: “My main driver was to create a car that people would fall in love with.

“Traditionally the appeal of cars in the A-segment has come from their practicality and compactness, and their price tag. But all too often they lack desirability, the elements that make you truly want a car. Design is treated as secondary and there aren’t many equipment options to choose from.” In taking this approach, Terai acknowledges that you won’t be able to please everyone.

“If you aim for an emotional link between customer and design, you have to accept that tastes differ. And in a crowded marketplace, it’s better to have a design that half the people absolutely love, rather than one that nobody objects to. That’s how new Aygo stands out,” he explains.

Compact packaging was fundamental to the design new Aygo to maintain its town-friendly handling.

The overall length has increased by 25mm to 3,455mm, and although front headroom has been increased by 7mm, vehicle height has actually been reduced by 5mm to 1,460mm, supporting the car’s aerodynamic efficiency. Both front and rear tracks have been widened by 8mm.

New Aygo may be compact and characterful in appearance, but it’s robust and has real street presence too. Its solidity comes from a strong form which gives the design its core volume. But, to introduce a playful element, the designers used the concept of a soft object breaking through the hard shell of the design, creating break lines and giving Aygo its distinctive frontal X-graphic. This spreads outwards across the surface of the bodywork, and takes in all the vehicle’s main external features, including upper and lower grilles, headlamps, foglamps, and even mirrors and side glazing.

In profile, the roof has been lowered and the front header moved forwards. As a result, the cabin’s centre of gravity also shifts to the front, creating a more balanced and forward leaning posture. This is further emphasised by a sloping beltline which terminates in the forward leaning rear light clusters. The roof itself has a new pagoda-style profile and an integral rear spoiler.

The shape of the side-glazing differs between the three and five-door models, the latter extending its window graphic into the rear light clusters, giving an impression of extra length..

The rear end displays a similar design theme to the front, with the tailgate and lower bumper forming break lines in the vehicle’s solid surface.

The lamp clusters are set within the hexagonal tailgate, and the upper bumper section widens into pronounced wheel arches which give the car a broad and stable stance.

The shape of the centre console – trapezoidal – sets the theme for new Aygo’s interior and is reflected in details such as the air vents, door trims and gear shift surround. The console supports a wide dashboard with a matt, anti-glare finish, set between slim A-pillars. The new instrumentation features a meter made of up concentric rings which are permanently lit. It incorporates an easy-to-read central multi-information display.

Although the wheelbase is unchanged at 2,340mm, the cabin is longer by 9mm, Wider armrests also improve comfort. There’s more room for luggage as well – an extra 29 litres – and loading is easier thanks to the space between the sill and rear seatback being made 5mm wider.

New Aygo will be available with Toyota’s new x-touch multimedia system, operated using a fully integrated seven-inch touchscreen. It’s the first system in its segment to come with a rear view camera as standard.
It uses a five-function main menu, giving easy control of audio, phone (including sending and receipt of texts), connectivity, vehicle and journey information functions. Customers will also be able to access a wide choice of navigation and social media applications.

One of new Aygo’s defining qualities is a wealth of affordable customization options that will allow customers to create a car that’s truly individual.

On the outside the X-shaped front grille, rear bumper insert, enhanced front bumper and alloy wheels can all be specified to suit, while in the cabin the instrument panel, centre console, air vents, shift knob and gear lever surround can easily be changed, even after years of ownership.

To make life simple, customers can also choose from a range of exterior and interior styling packs if they prefer, rather than selecting piece-by-piece customization. 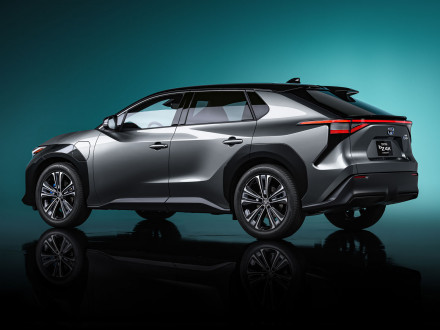