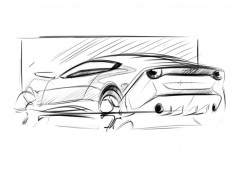 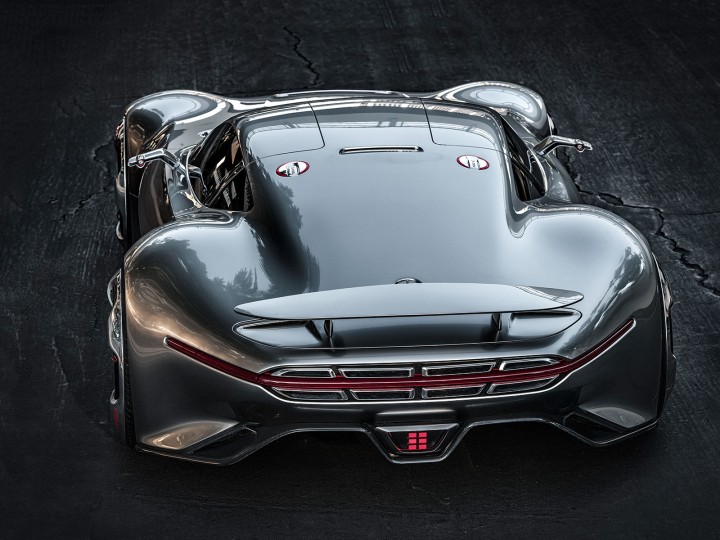 Mercedes-Benz has revealed the AMG Vision Gran Turismo Concept, the sportscar that will be featured in the GT6 racing game. It combines a retro-inspired look with extreme proportions and high-tech touches.

Following the teaser images of the past days, Mercedes-Benz has released the official images of the AMG Vision Gran Turismo Concept, created for the upcoming GT6 PlayStation 3 racing game. 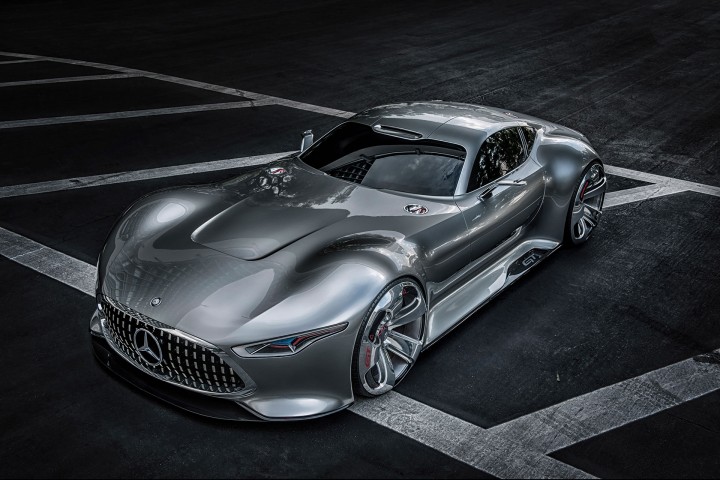 The concept has been developed as a digital model and will be also presented a 1:1-scale model on 19 November 2013 at the opening of the new Mercedes Benz Research & Development Center in Sunnyvale, California. 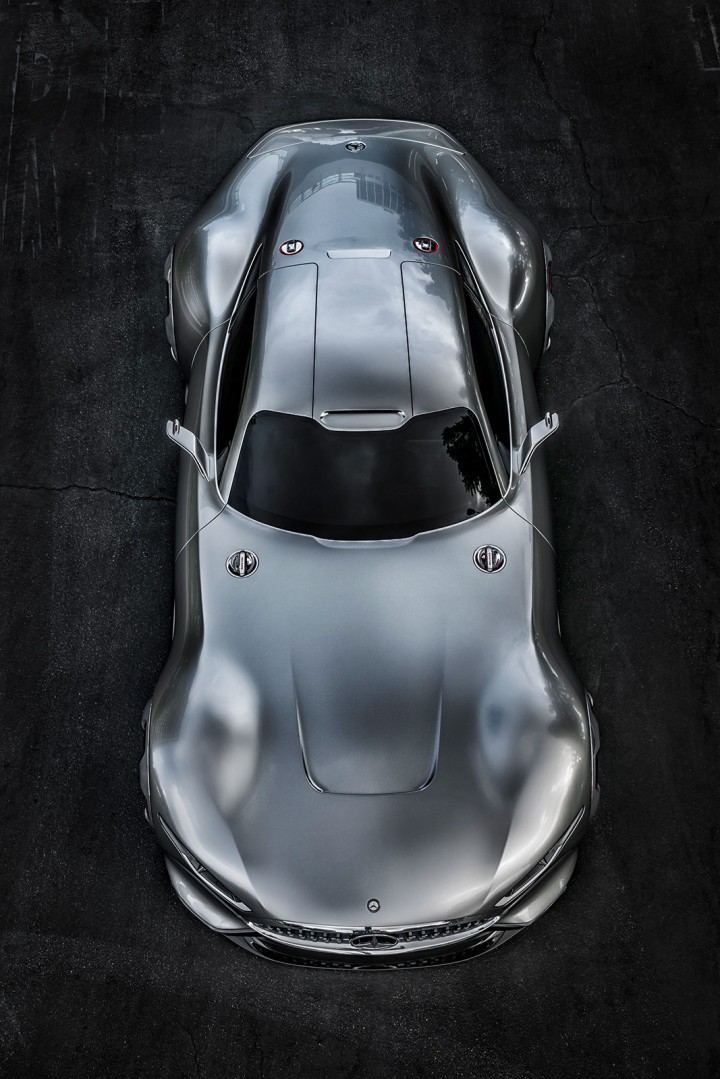 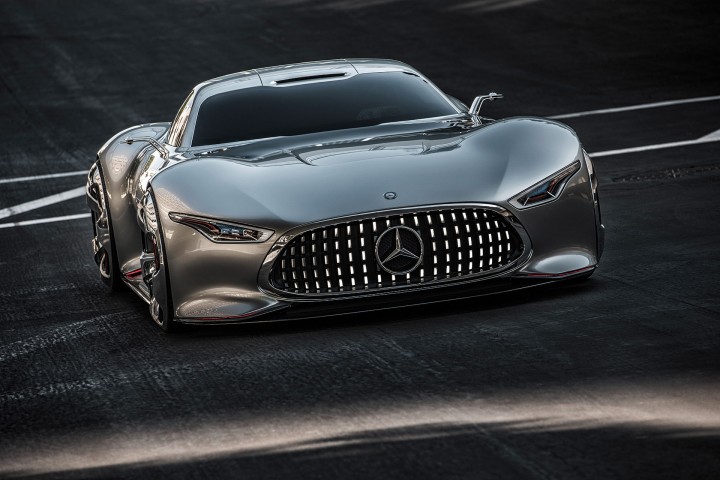 This could hint at a possible new design direction for the carmaker, with a less sculpted and aggressively shaped treatment – something already indicated with the recent Concept S-Class Coupé.

Among the distinctive design elements of the AMG Vision Gran Turismo Concept are the trademark gull-wing doors, the futuristic side-view cameras, the racing inspired release catches on the hood and  the fuel caps positioned on the roof. 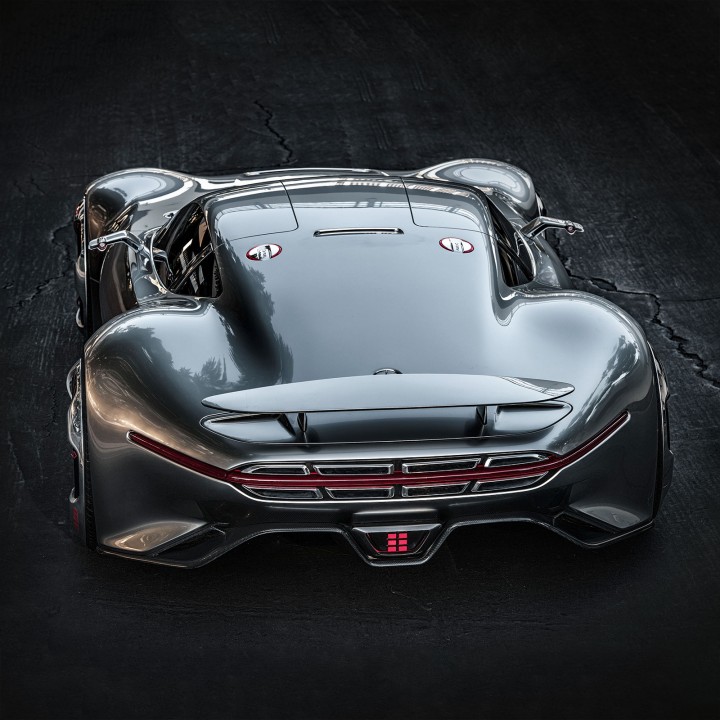 The sensual rear-end is characterized by the impressive look of the eight pipe exhausts, a retractable wing and the absence of the rear window, which lends the concept an even more aggressive, mysterious appearance and recalls another retro-inspired, extreme concept: the Audi Rosemeyer. 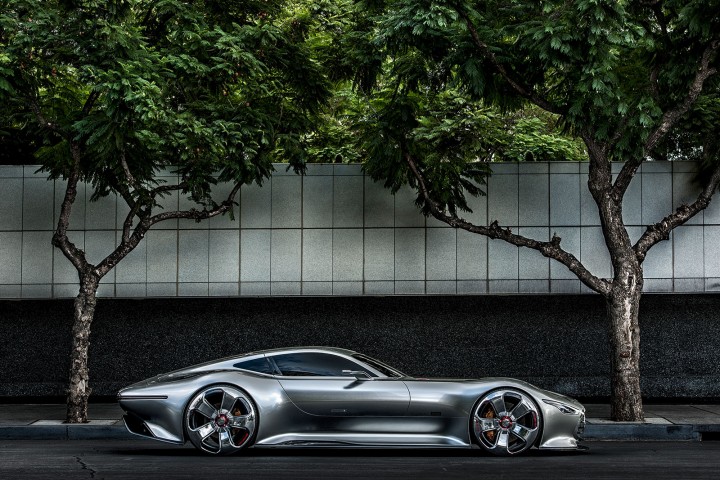 Another eye-catching feature is the radiator grille – a reinterpretation of the wide Mercedes-Benz sports car grille with the central star: it recalls the 300 SL racing car of 1952 and features LEDs in place of the conventional louvres.

Below we report selected information from the official press release.

The sports car proportions that are a typical Mercedes feature have been reinterpreted: the long hood has a flowing transition into a compact greenhouse offset to the rear, which takes the form of an aerodynamically efficient water drop to descend slightly at the rear, where it rests on the rear end with broad shoulder contours.

The dynamic aura is accentuated by an extended, dramatic side contour and a pronounced bulge to the wheel arches, which blend into the low-slung, muscular bodyshell.

The angled headlamps, with their colour scheme and determined look, convey a sense of sportiness and readiness to leap forward. This impression is reinforced by the hood with its expressive forms and motorsport details, such as the release catches on the hood and the fuel cap, for example.

The red-glowing contour lines on the lower part of the vehicle create an effect similar to that of exterior ambient lighting and stand out from the silver-painted bodywork. This makes the Mercedes-Benz AMG Vision Gran Turismo look even more aggressive.

Another eye-catching feature is the radiator grille – a reinterpretation of the wide Mercedes-Benz sports car grille with central star. Its shape is reminiscent of the legendary 300 SL racing car of 1952. However, instead of classic louvres the grille of the show car features exclusively LEDs.

The variable LED grille with different light patterns is a further development of the diamond grille introduced with the new A-Class.

The interior – which has not yet been revealed – takes inspiration from Formula 1 cockpits and features red integral sports seats which blend into the black flooring of the footwell to form a protective shell.

The form of this flowing, sculptured shell suggests enormous forward thrust. The dashboard also creates an equally dynamic effect. It has been designed in the form of two gullwing doors which are positioned on each side of the steering column. As a result the actual doors themselves appear to be an extension of the instrument panel.

The central display is optimally positioned in the driver’s field of vision: it takes the form of a glass surface floating directly above the racing steering wheel with its shift paddles, and shows all the relevant information such as road speed, engine speed and operating temperature as required.

Operation is by rocker switches in the centre of the dashboard and in an overhead console, like in a jet. The steering column visibly penetrates the firewall to the engine compartment, creating a visual connection between the driver and the heart of this super sports car, the AMG V8 front-mid engine.

The AMG V8 biturbo engine develops 430 kW (585 hp) and a maximum torque of 800 Nm. With an aluminium spaceframe body and components in carbon fibre, the Mercedes Benz AMG Vision Gran Turismo has a total weight of just 1,385 kilograms.

Specifically for the Gran Turismo® 6 game, the Mercedes-AMG sound specialists have created a powerful, sonorous exhaust note that enhances and celebrates “the V8’s love of high engine speeds”.

To mark the 15th birthday of the popular Gran Turismo® series this year, Kazunori Yamauchi, Producer of Gran Turismo series and President of Polyphony Digital Inc., called upon the world’s leading automotive manufacturers and design studios to look forward into the future.

Using the theme “Vision Gran Turismo”, these creative teams were to develop concept models which give a unique insight into the further development of the automobile.

As virtual vehicles that nonetheless function just like a real car, the visionary concepts will be gradually unveiled in and integrated into the new game Gran Turismo® 6 through online updates.

An official video documentary that gives some insights on the development of the stunning AMG Vision Concept, created for the Gran Turismo 6 PS3 racing game. 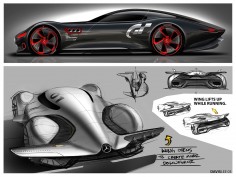 Following the recent video design story and the past article and gallery, we report a new set of design sketches of the Mercedes-Benz AMG Vision Gran Turismo Concept, documenting the different directions explored during the conceptual stage.