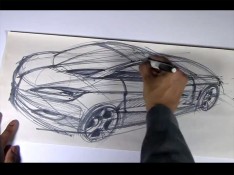 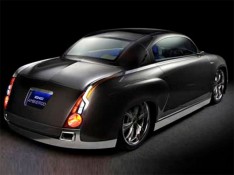 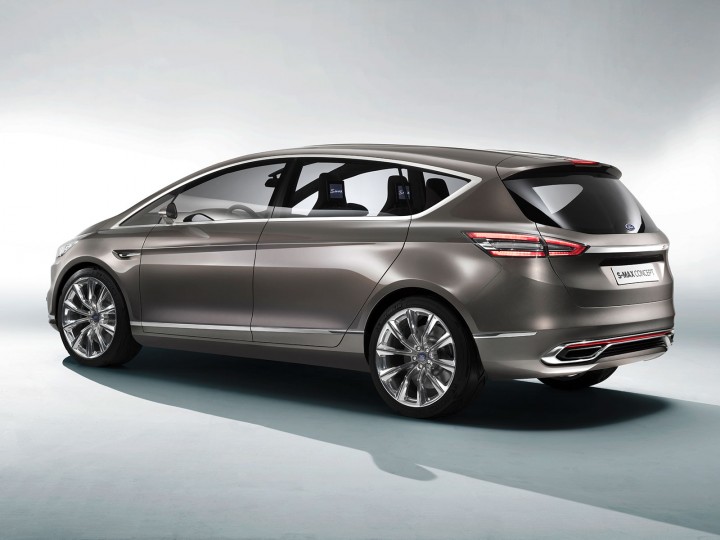 The new Ford S-MAX Concept is a show car that previews the next-generation production crossover and showcases new technologies focused on comfort, connectivity and safety.

Revealed at the recent 2013 Frankfurt Motor Show, the S-MAX Concept combines the ideas and core values of the original S-MAX with a renewed look that adopts the current design DNA of the company. 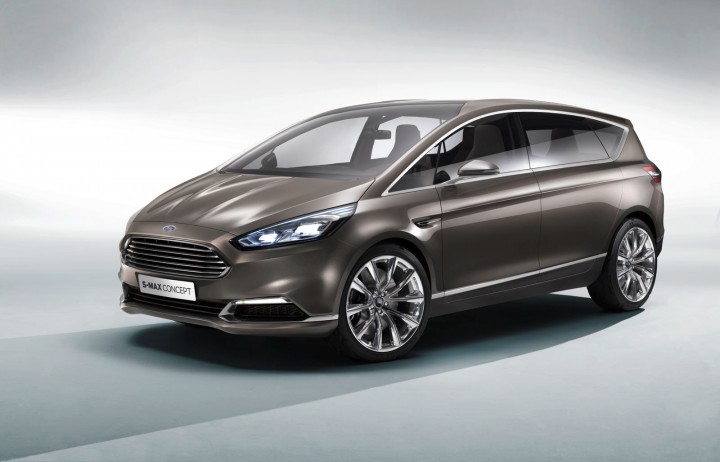 The exterior is characteried by sculpted, tight surfaces and by a distinctive face featuring the upright, hexagonale grille and elongated HED headlights.

Additional design elements include the body-side crease lines, the hood strakes, and distinctive graphics theme defined by the side windows contours and the lower trim running along the sills. 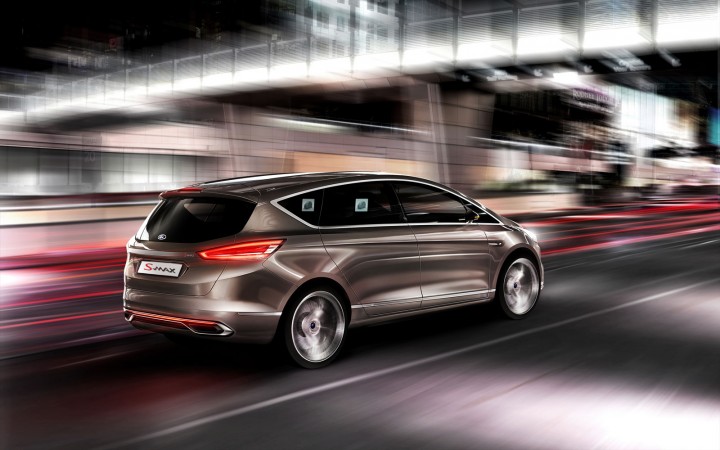 The interior has very clean lines and more futuristic shapes – especially in the design of the seats, while the show car status allowed designers to introduce a mix of refined materials and a number of distinctive, sculpted details. 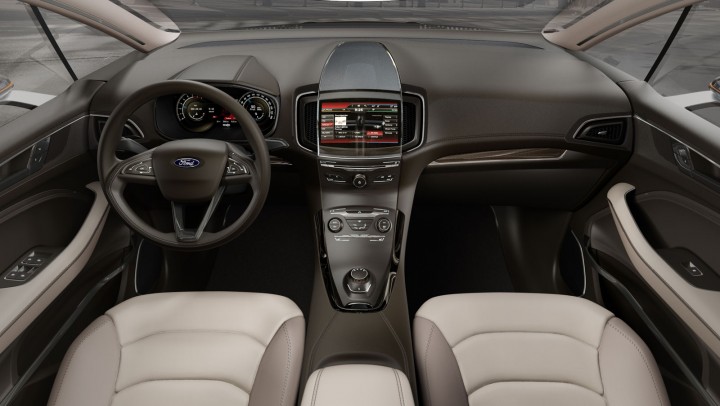 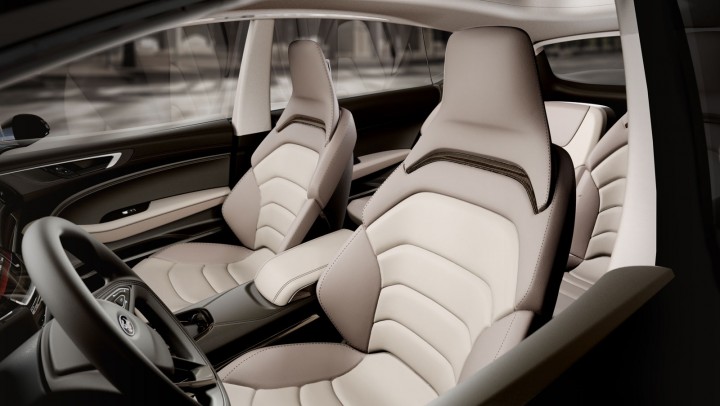 The concept is powered by a new 1.5-liter EcoBoost engine. Below we report the official videos and the design details from the press release. Also check our extensive design gallery.

The new S-MAX Concept employs the latest Ford global design language with a high mounted grille, swept-back headlamps and a unique treatment of the vehicle’s lower fascia that includes design elements that appear to float within the lower front aperture and above the spoiler.

The characteristic S-MAX profile has been honed with the front hood sweeping seamlessly into the sharply raked front screen, which in turn flows into the dynamic arc of the roof to create a unique glass roof graphic.

This sleek silhouette surrounds a spacious and versatile interior that offers anything from four-to seven-seat configurations. 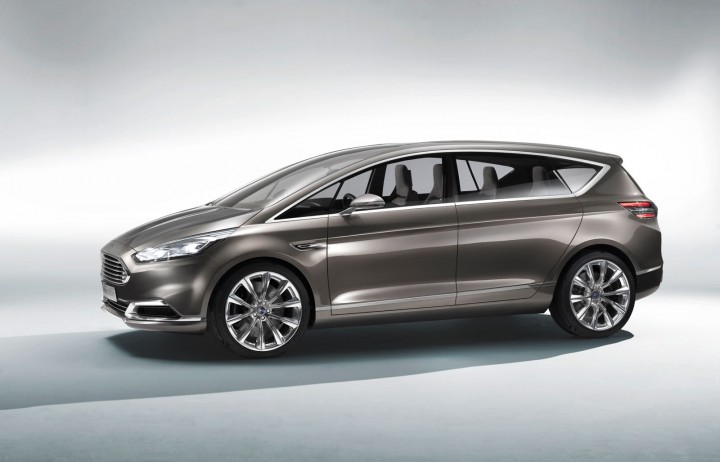 “S-MAX drivers are passionate and bring high expectations – they see their S-MAX as a one-of- a-kind vehicle,” said Martin Smith, executive design director, Ford of Europe. “Our mission was to exceed their expectations in every area while respecting the core of what they love about the S-MAX.”

Further exterior design cues include a feature line running along the side of the vehicle to deliver an impression of length and speed, sculptured muscular shoulders, and distinctive headlamps featuring Organic LEDs, a technology which offers greater flexibility in terms of positioning and design, fast response and color range. 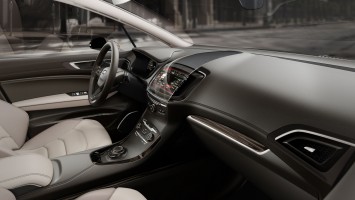 The front cabin places the focus firmly on the driver. Dynamic shapes and forms combine in a high-set instrument panel that cuts back in the centre console and creates a feeling of space.

The door panels are similarly sculptured and an innovative interior roof design maximizes the feeling of spaciousness.

High quality materials, including an ultra-soft leather wrap for the instrument panel, and leather and carbon fibre detailing for the sculptured seats, give the interior a sophisticated aura. 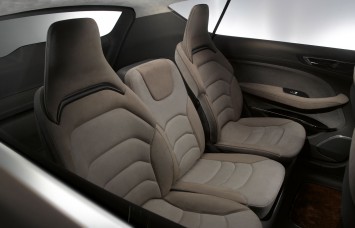 An intelligent second row of seats makes it easy to get in and out, with a centre seat that folds into the vehicle‘s floor and allows for maximum versatility

The third row of seats adopts the Thin Seat Technology, which allows the seats to be raised and lowered in a single action with minimum effort.

“The fine detailing and visible craftsmanship in areas such as the instrument panel air vents reward the driver for really paying attention,” said Smith.

“Each and every element of the interior stands up to close inspection with intricate and thoroughly considered design.”

The Ford S-MAX Concept also employs leading-edge Ford features and technologies to provide customers with new levels of connectivity and well-being as well as safety, convenience, and driving appeal.

The Ford SYNC and MyFord Touch systems deliver wireless internet access for passengers, supported by a tablet docking station that allows second row occupants to integrate their personal devices into the vehicle.

SYNC AppLink enables the driver to voice-control smart phone apps from an expanding list of service providers, which include Spotify, Kaliki, Glympse and Aha, bringing additional music, news, personalized information as well as location and navigation options into the vehicle.

SYNC also enables additional features to improve health and well-being, including an ECG Heart Rate Monitoring Seat system that records the driver’s heart rate, delivering long-term heart activity data, and offers the potential to connect with Ford SYNC to alert remote medical experts to unusual activity or even trigger active safety systems to take over in a case of emergency

The Glucose Level Monitoring connects with Ford SYNC could warn parents if a sleeping child in the rear seats suffers a diabetic episode.

The car-to-car communications technology enables the vehicle to talk to similarly equipped vehicles, delivering warnings in the event of oncoming traffic on the wrong side of the motorway, or if a vehicle has stopped in a potentially dangerous situation such as a blind bend in the road. 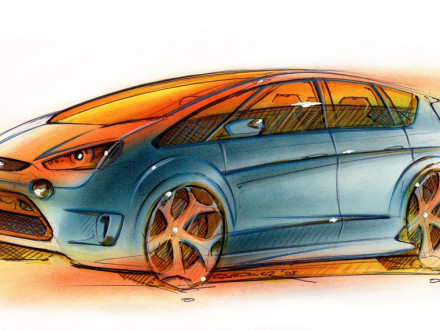 The S-MAX is the first production model from Ford to feature elements of the kinetic design direction first shown on the Iosis concept vehicle. Its production has began last 18 April in Belgium.