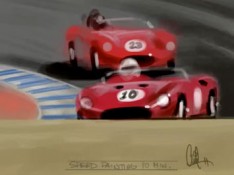 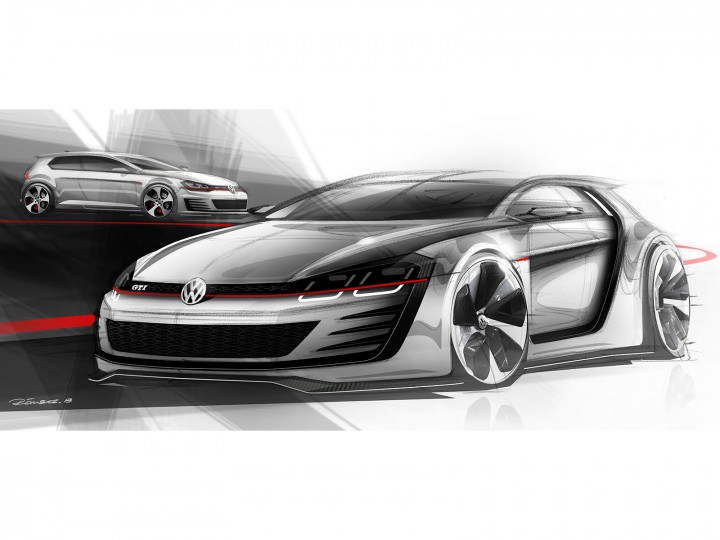 At the 2013 Wörthersee Tour event Volkswagen is unveiling a Golf GTI Concept with a design that adopts all the GTI trademark styling cues taking them to the extreme.

While the official pictures are not released yet, Volkswagen has released a set of design sketches that give an indication on the direction followed for the development of the concept as well as some details on the vehicle.

The Design Vision GTI was designed under the direction of Klaus Bischoff, Volkswagen’s Head of Design.

The main design elements of this concept are the new C-pillars and side sills which have been extended out as autonomous body elements, allowing for a substantially wider track and larger wheels.

Using  the flexibility allowed by the Volkswagen Group’s MQB or Modular Transverse Matrix, the Design Vision GTI has a long wheelbase and short front overhang.

These dimensions are reflected in the car’s wide track: 1,595 mm at the front and 1,579 at the rear. Its overall wide, low stance shows that this is a car which belongs on the track, while unique 20-inch wheels and ceramic brake discs complete the racing style.

Many of the car’s external design features are typical of GTIs, but executed in an extreme manner: these include the honeycomb grille, black, red and white color scheme and horizontal red line details.

A particularly feature is the headlamp unit in which the lights are set back as if into the bonnet, giving the car ‘eyes’ with a somewhat menacing appearance.

Klaus Bischoff explains: “We put our claim to be a global player on a new basis with the DNA of our universal design idiom. A design that visualizes the brand’s identity without a doubt is binding for all models that carry the VW logo. Thus each model is recognized as a true Volkswagen by its distinctive design.”*

“We wanted to bring out the design elements of the GTI as concisely, dynamically and emotionally as we could so as to get to the heart of the fascination that this car emanates.”

Inside, the concept car was designed according to the following rules laid down by Volkswagen’s Head of Interior Design, Tomasz Bachorski: ‘Pure GTI. Concentration on the truly essential. But with style.’

As a consequence, the Design Vision GTI has a minimum number of switches, oriented towards the driver for optimum use when driving on the track. 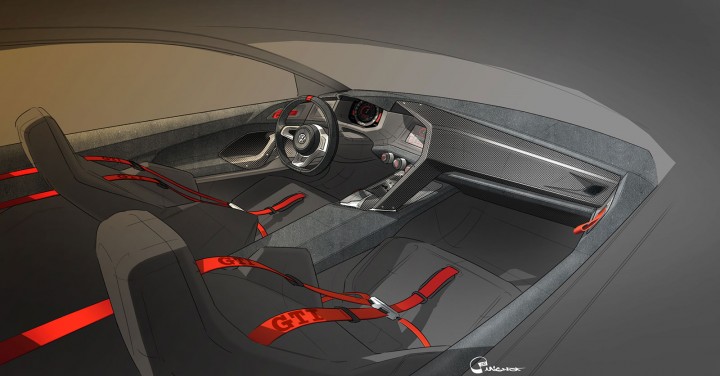 The cabin adopts a familiar black, red and white color scheme, touches of carbon and alcantara as well as a door handle in the shape of a red loop (reminiscent of that in Porsche Cup models) add to the race car feel.

The back seat space is occupied by an X-shaped cross member, adding to the car’s overall stiffness. Two black helmets are stored under the cross member.

Of note in the cabin are an onboard camera and a facility to allow the driver to network with a social community from the car. A large display to the right of the main instruments shows the circuit being driven as well as times achieved. The display also communicates with other vehicles on the course and calculates details about the current status of the race in real time.

This power is channelled via a DSG gearbox to all four wheels; standstill to 62 mph takes a mere 3.9 seconds. 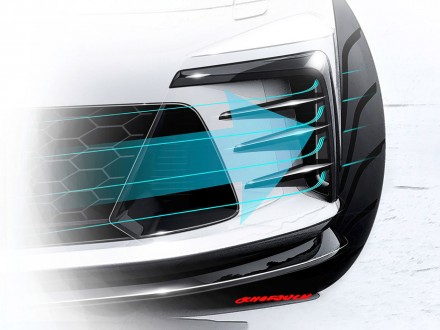