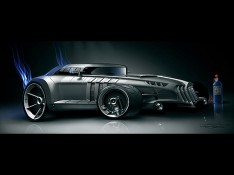 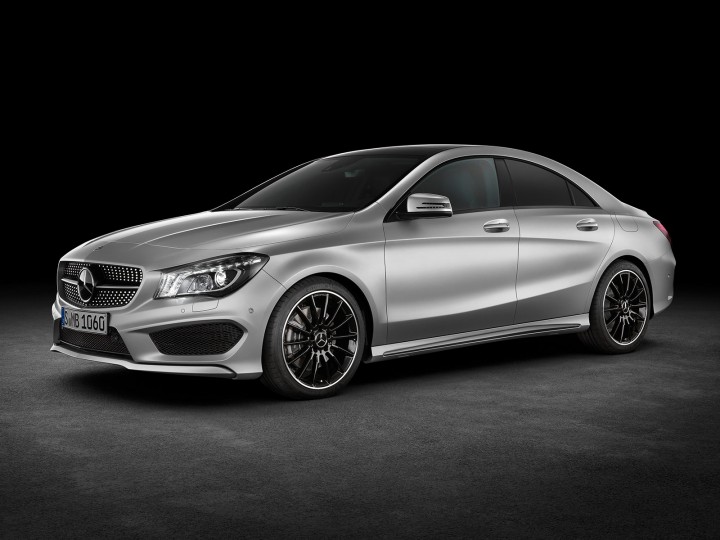 After founding a new segment with the CLS in 2003, Mercedes-Benz is now trying to extend the four-door premium coupe concept to the midsize segment. 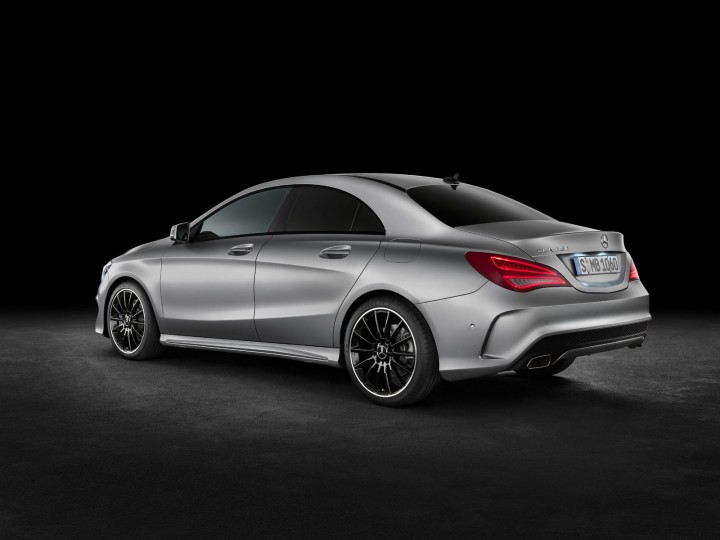 The CLA-Class proposes a four-door  variant of the new A-Class model, and showcases a design strongly linked to the Concept Style Coupe introduced at the 2012 Beijing Auto Show in April. 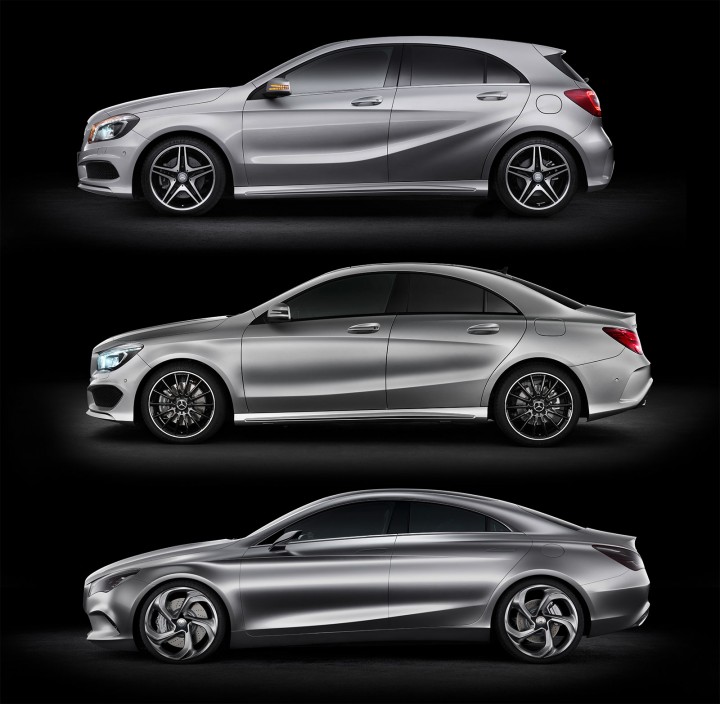 From above: the A-Class, the CLA-Class and the Concept Style Coupe

The front section is very similar to the production A-Class, with a more aggressive character defined by the larger, upright grille with the diamond pattern and by the introduction of two powerdomes on the hood surface.

From the side, the CLA successfully balances the production requirements in terms of interior measurements and the distinctive proportions and sculptural surface treatment of the Concept Style Coupé. 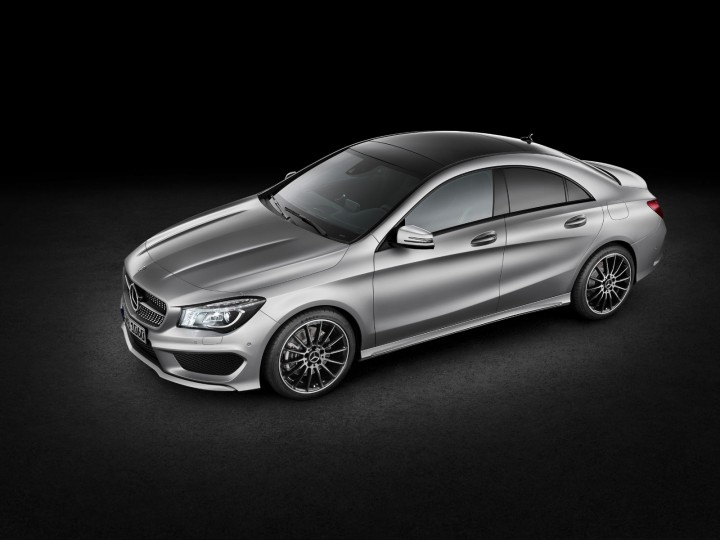 Mercedes-Benz designers also succeeded in creating a balanced, rather sleek profile while maintaining the same wheelbase (106.3 in / 2,700 mm) of the A-Class hatchback. 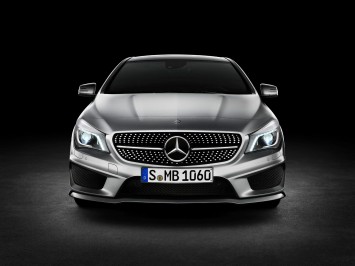 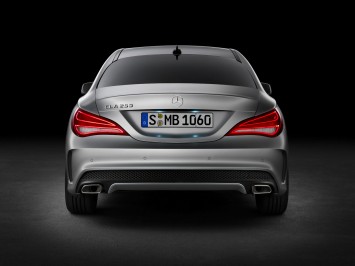 The rear end is also well-integrated in the overall exterior, and adopts the now trademark volumes and styling cues of the CLS and the Concept Style Coupe.

Confirming the aerodynamic efficiency is the Cd value of just 0.23 (0.22 for the CLA 180 BlueEFFICIENCY Edition), a new record which makes the CLA the most aerodynamic series production vehicle in the world. 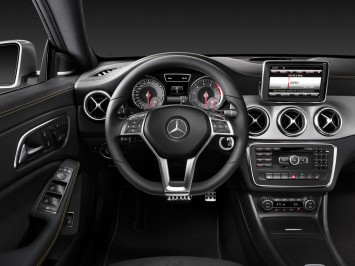 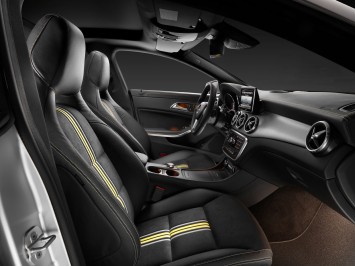 Compared to the A-Class sister model, the interior is virtually unchanged.

The new CLA is already available for ordering with prices starting from 29K Euros. The first units will be delivered to dealerships in April.

Among the innovative safety systems is the radar-based COLLISION PREVENTION ASSIST with adaptive Brake Assist. 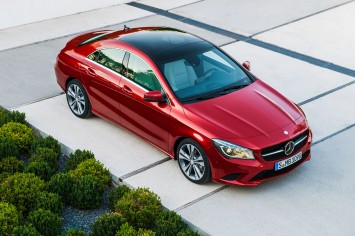 Its sporty proportions and powerfully dynamic design idiom featuring an interplay between concave and convex surfaces give this four-door coupé its unmistakable look.

The CLA adopts the avant-garde design of the Concept Style Coupé into series production almost 1:1.

The vehicle’s striking features include the bonnet embedded in the front end with powerdomes and the diamond radiator grille. 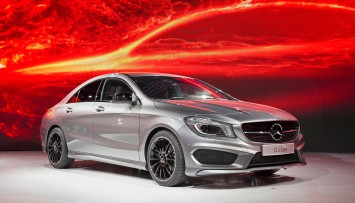 The light modules and LEDs behind the headlamp cover glass have been arranged in such a way as to create the characteristic “flare effect” for the daytime driving lights and indicators.

Numerous details indicate that on a design level the CLA represents a further development of the modern classic Mercedes-Benz CLS.

Three prominent lines give structure to the vehicle when viewed from the side: the front structural edge over the wings flows towards the rear end in a characteristic dropping line. 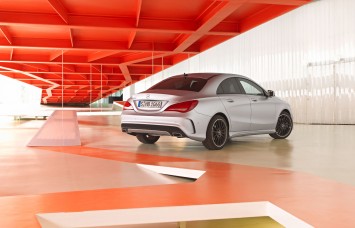 Another, more sinewy line spans the shoulder muscle above the rear axle, while the third feature line extends in a sweeping curve from the front wheel towards the rear. Together, these lines lend depth and dynamism to the side profile.

The width-emphasizing rear end exudes power and athleticism, featuring an interplay between convex and concave surfaces and edges.

The gently sloping roof contour and the pronounced, hallmark curvature of the rear window provide the CLA with a coupé-style character from the rear, too.

The athletic impression from the rear results from the drawn-in C-pillars in conjunction with the shoulder muscle over the rear wheel arch linings.

The tail lights are framed by the muscular lines of the shoulders which extend into the rear end, the horizontal orientation of the lights emphasizing the rear’s powerful and aesthetic breadth. The light functions feature an arrow-style arrangement.

A large panoramic sliding sunroof is optionally available. This sunroof consists of a fixed polycarbonate cover at the front, a moving element made of mineral crystal and side trims to match the glass look. As such, the glass surface then extends from the front windscreen to the rear window.

With a Cd value of 0.23, the CLA sets a new benchmark – both within the Mercedes-Benz model range and among all production vehicles.

The drag area, Cd x A -which is crucial to aerodynamic resistance – also leads the field, at 0.51 m².

This already record figure is undercut still further by the CLA 180 BlueEFFICIENCY Edition, which will be launched in June and is also available to order with immediate effect. In this case the Cd figure is 0.22, while in terms of wind resistance the four-door coupé manages to breach another magic barrier: the figure here is just 0.49 m².

The good air flow characteristics, which are a major contributory factor to the vehicle’s low fuel consumption in everyday conditions, result from numerous aerodynamic optimization measures.

Extensive underbody panelling, additional panelling in the middle area of the rear axle and an aerodynamically optimized rear silencer followed by a diffusor improve the flow of air under the underbody. 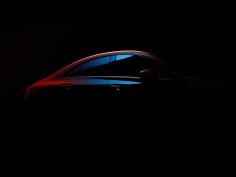