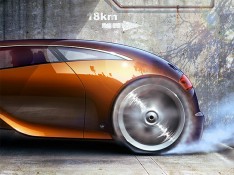 The Ultimate Race: rendering a futuristic hotrod in Photoshop by Olivier Gamiette 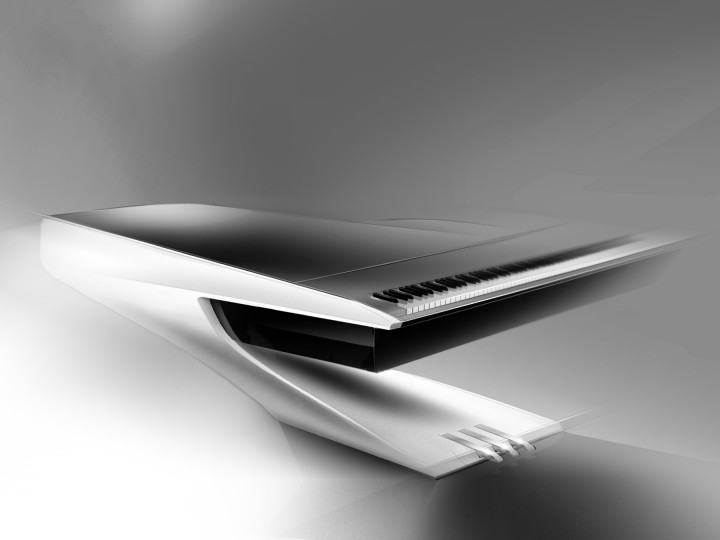 Peugeot Design Lab and French piano manufacturer Pleyel have created a prototype of a futuristic grand piano, with an avant-garde look inspired by automotive design.

At the 2012 Paris Motor Show the recently launched Peugeot Design Lab has presented a number of original projects. The most distinctive one is a Grand Piano concept developed in partnership with French piano manufacturer Pleyel. 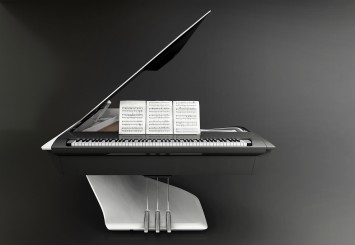 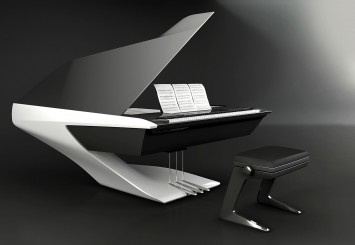 This is not the first time a carmaker is attempting to translate the automotive design language and philosophy to a piano: in 2009 Audi partnered with Bösendorfer and presented its own design study. 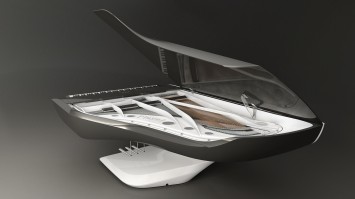 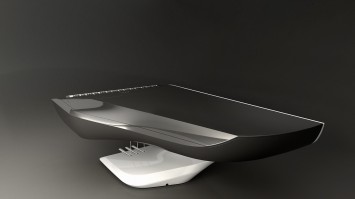 The generous dimensions, the allure of elegance and exclusivity, the possibilities of using different styles and surface treatments make grand pianos a perfect playground for carmakers to experiment with shapes and new uses for advanced materials and technologies. 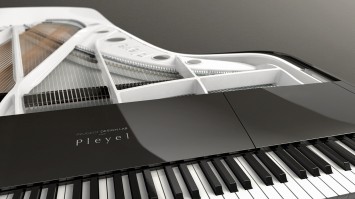 In the case of the Pleyel concept, Peugeot Design Lab introduced a number of innovations in terms of materials, shapes and functionalities, while maintaining a high sound quality in line with the brand’s DNA.

The exterior shapes – sculptural and sophisticated – lend this baby grand a slender appearance and suggest dynamism, lightness and an effect of levitation.

The body and the soundboard are made of wood, while the lid and the distinctive cantilevered leg have been made of carbon fibre for its lightness and for sound projection.

The traditional piano lid was replaced by a self-supporting lid mechanism that can be raised with one hand – much like a car’s tailgate. 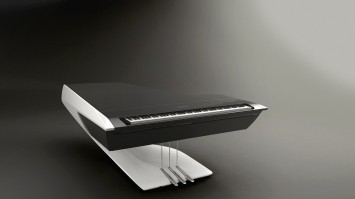 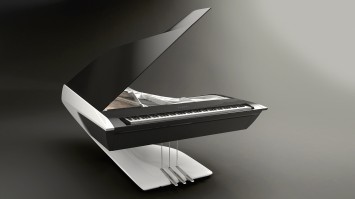 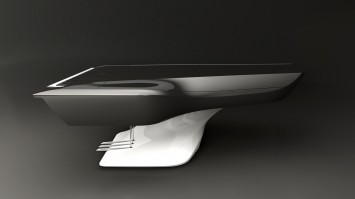 The mechanics system was lowered in order to align the pianos cover and keyboard.

Particular attention was paid to the quality of the sound perceived by the pianist, something almost always overlooked in the past.

Another innovation is that the artist can be seen by the audience from every angle increasing the level of involvement.

Below we report the official design story.

In 2011 with its wealth of experience and driven by one of its designer/pianists, Peugeot Design Lab approached the piano manufacturer Pleyel with the idea of creating an extremely innovative product. 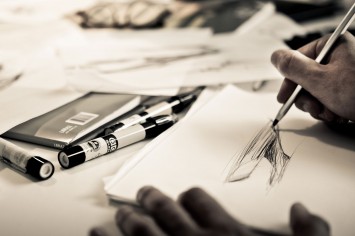 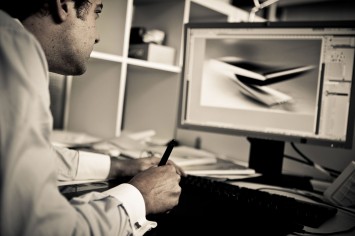 «This approach matches the life of Pleyel over the last ten years, explains Hubert Martigny, Managing Director of Maison Pleyel, in its desire to be open to design to the contemporary world. Moreover, Peugeot and Pleyel are both two hundred year old companies with a similar philosophy ». 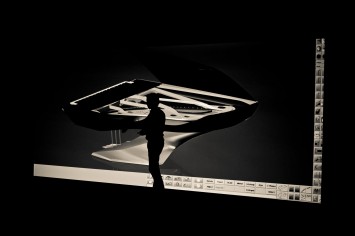 The designers at the studio absorbed themselves in the history and know-how of the manufacturer Pleyel, with the objective of finding common DNA and creating a unique piano that best expresses the talents of both companies: mixing century old traditional craftsmanship with the latest automotive technologies.

For Cathal Loughnane, the Head of Peugeot Design Lab, «the objective was above all to be innovative, the goal was to develop an object that neither Peugeot nor Pleyel could create independently». 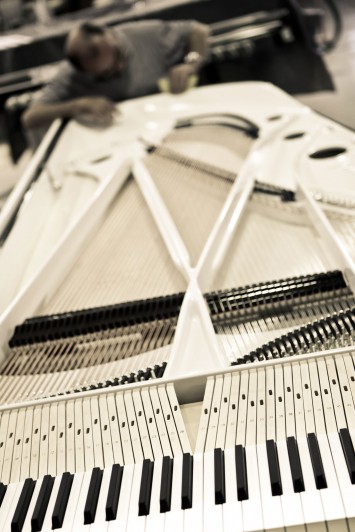 The final development of this piano of the future required months of research, study and tests carried out by the designers together with a team of engineers technicians, and acoustic engineers from both companies.

The objective was above all to retain Pleyel’s high sound quality, simultaneously subtle, colored, with powerful bass and scintillating treble, harmonized on the timbre.

It was also necessary to retain its unique touch. «Changing the action and the design of the piano must not only guarantee identical Pleyel quality, explains Hubert Martigny, but also deliver a significant & remarkable step forward ».

This baby grand’s first major innovation is the lowering of the mechanics in order to align the pianos cover and keyboard. «This is one of the biggest innovations in the contemporary history of the piano » notes Cathal Loughnane, who notes two exceptional properties of the instrument :

For the first time in the history of the piano, the audience can see the artist play from any viewing angle. This shows off the pianist’s hands and creates a higher level of interaction with the audience.

Also for the first time, the pianist hears the sound of their instrument with a level of quality never previously attained.

The lowered action no longer inhibits the sound projection, which consequently becomes immediate. «For the first time in my life, I truly hear the sound of the piano» reports Yves Henry, concert pianist, Professor at the Conservatoire de Paris–CNSMDP and CRR, charged with testing the instrument. 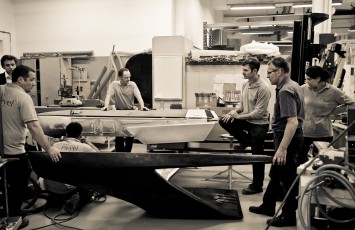 Working with Pleyel’s engineers, Peugeot Design Lab has done away with the traditional piano lid prop by coming up with a self-supporting lid mechanism that can be raised with one hand, an idea borrowed directly from a cars tailgate. With this component out of the way, one can freely admire the piano’s mechanism in action.

The traditional three piano legs are replaced by a single cantilever leg with all the elegance of a suspension bridge.

This original innovation, borrowed from the world of architecture, creates a surprising levitation effect by offering the sight of a mechanism, supposedly heavy, floating above the stage. It confers exceptional visual lightness to what is traditionally one of the heaviest instruments in the musical world.

With the same interest of not altering the performance in a concert and the lightness of the instrument, the Peugeot Design Lab team created a sheet music support invisible and perfectly integrated into the piano once closed. 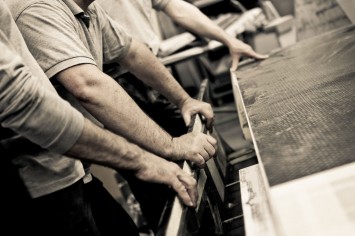 Although the body of the piano and the soundboard are made of wood, which reacts best to sound, the lid and the leg have been made of carbon fibre for its properties of lightness and also of sound projection.

Although the central frame is made of steel so that it can support the weight, the leg has also been created in carbon fibre, and filled with expanded foam to eliminate any sound box effect and best control all of the sound components.

Even though the piano retains its black lacquer finish one of the classic cues of the piano world, Peugeot Design Lab has completely revisited the instrument by endeavoring to change all of the traditional conventions, as regards volume, ergonomics and construction. 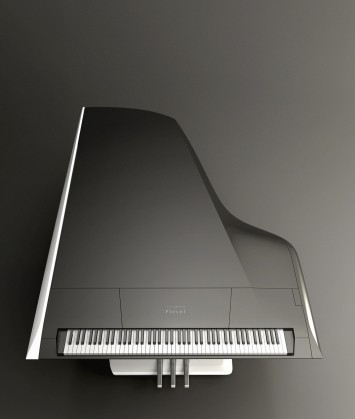 The studio has created a design language that rewrites the visual conventions of what a piano should look like, suggesting dynamism, lightness and an effect of levitation.

The designers then gave it a sculpture, quality and sophistication of surface taken from the world of the automobile. In this way, its soft and structured silhouette takes the look of the streamlined hull of a competition sailing boat.

A truly sculptured surface with an aerodynamic look, the piano has a slender appearance, resolutely revolutionary.

«We do not do style for the sake of style, explains Gilles Vidal, Peugeot’s Director of Styling.

«Nothing is free in this project and the innovations we have brought have to be understood. This instrument is not a concept but a real product which involves an exchange of know-how between the design studio and its client ».

Founded in 1807, the Manufacture des Pianos Pleyel is one of 1000 businesses referred to as an «Entreprise du Patrimoine vivant» (Living Heritage Company).

It is the oldest manufacturer of pianos in the world and the only one in France dedicated exclusively to the manufacture of high quality grand pianos.

Since 2000, Pleyel has made and produced a collection of exceptional pianos, underlining ten years of modernity, creation and collaboration with designers, artists and contractor-decorators who are reinventing the shapes, materials and colors of this timeless instrument. 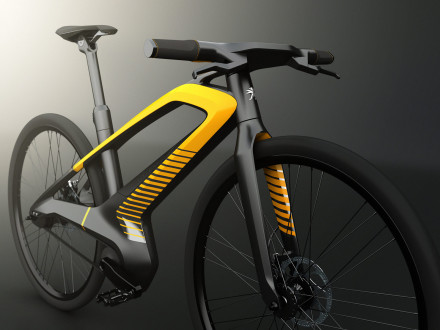 The eDL132 by Peugeot Design Lab is a high performance urban electric bike with a clean, dynamic design optimized for aerodynamic efficiency. 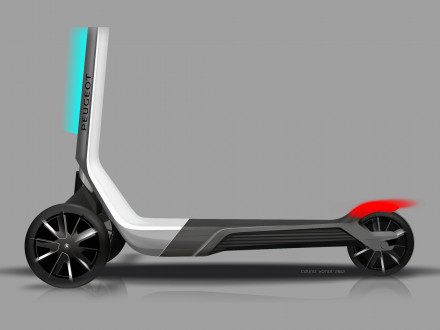 Developed by Peugeot Design Lab, the Trottinette Concept is a three-wheeled electric kick scooter developed for a new form of urban mobility aimed at improving accessibility to the city in a pleasurable and easy way. 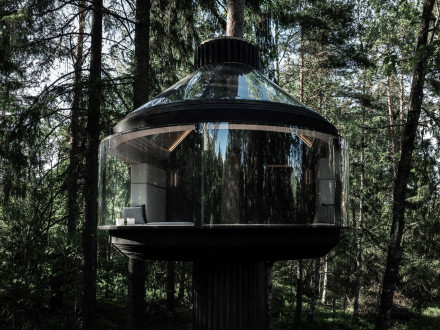