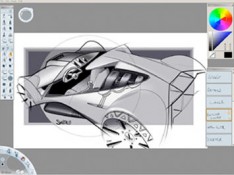 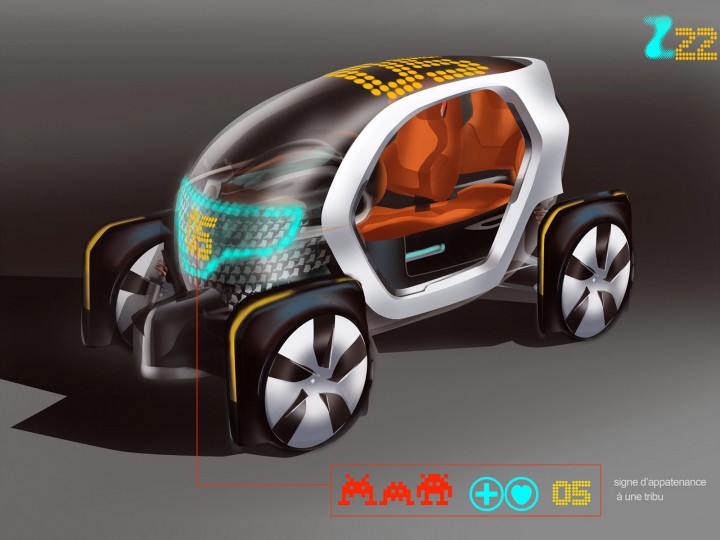 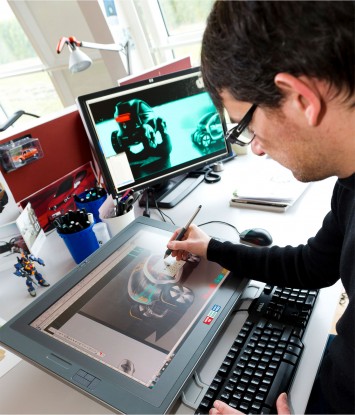 Luciano Bove: “When we started in January, we knew we had just one year to show the running prototype to our President.”

Given the tight deadline, the development involved Renault’s international design centers: Barcelona for creativity, Renault Design Central Europe (Bucharest, Romania) and the Indian studio in Mumbai, which contributed for the prototyping activities.

During the first exploratory stage several solutions were explored in a very short amount of time. “Given this time planning, the main design choices of the sketching phase had to be completed in just a month and a half.”

“We decided to create a vehicle positioned between a scooter and a car, and we also decided no to have side doors: this would allow us to avoid adding an air heating/cooling system, which would have been necessary with a closed cabin.”

Once the proposal by Francois Leboine was selected, the process moved to the digital design and 3D surfacing, done in Alias. 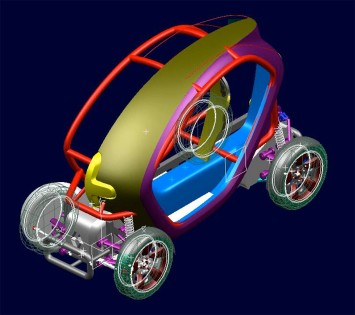 The collaboration between the engineering and the design teams led to the CAD model in CATIA, which was used as the starting point for the construction of the first models.

In order to review and share the results as the development was evolving, an important activity was the creation of photorealistic virtual movies, where the concepts were immersed into a real environment, and all the elements were conceived for showing the product at its best while avoiding to influence the viewer’s judgement

Luciano continues: “In April we created the first light model – a basic mock-up that gives designers the opportunity to evaluate for the first time the actual dimensions, and the basic ergonomics.” 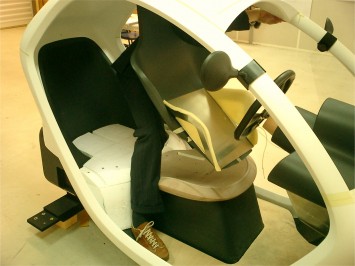 “This allows to go back to digital and make modifications and correct possible issues at a very early stage.”

“This type of essential models made out of wood were very common 15-20 years ago.”

“Today there is a tendency to use mostly CAD and other digital tools, but in this way there is the risk of losing the connection with reality.”

“When working on a new, different concepts with no clear references, it is very important to have a physical model in order to evaluate the the dimensions, the driving position etc.” 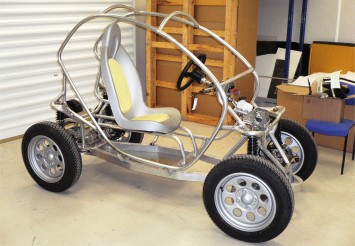 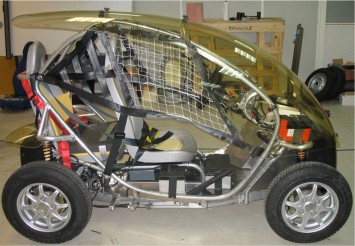 “From the light model, we also developed a basic, running prototype, with an essential frame and the minimum protections. This vehicle was used on a comparison test, to prove the validity of the vehicle concept.”

In this test the Twizy prototype, a car and a scooter were driven across Paris along the same route.

The scooter completed it in one hour; the car in one hour and a half and the prototype in one hour – the same time of the scooter. This result convinced the company to go forward with the development. 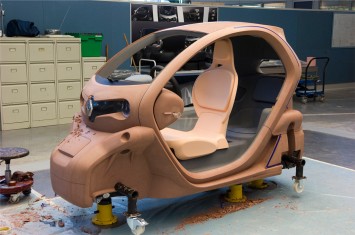 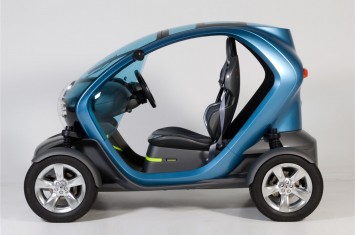 Patrick Lecharpy: “In June we started the construction of hard prototypes, used for the first real presentations. The static full-size model was built by our Mumbai studio in just two months between June and July.” 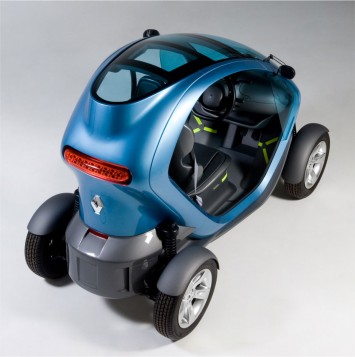 “In order to achieve the high surface quality and reliability required in the automotive industry, we followed the typical, well-established design process involving the creation of full-size clay models.”

“The hand making of these models allows a physical approach that is still the best method for designers to understand and evaluate forms and volumes, and also represents an artistic quality to the work.”

“When working on the full scale models, we also started to think about the personalization possibilities, later explored through the creation of additional scale models.”

In the subsequent phase, the team created the Light and Heavy Prototypes, which allowed to make the first real tests.

The final step involved the construction of prototypes for the so-called clinique tests, where the vehicle is presented to potential customers in a similar market niche – in this case identified as the owners of a Smart or of a Piaggio MP3 – without revealing the brand’s name.

“A team of market research specialists analyzed and interpreted the feedbacks gathered, which in the case were very encouraging.”

The running prototype was ready for the first test by the end of the year and was green light for production. 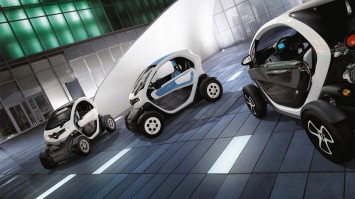 With the launch of the Twizy Renault also introduced a new business model: the battery pack is not sold together with the car: it is rented for a monthly fee of approx. 45-50 Euros (depending on the markets).

Luciano Bove explains: “In this way we were able to significantly reduce the price: in fact, the battery alone would have a cost of 6K-7K Euros.”

Today the Twizy is available for testing at the Renault’s dealerships, and as of today sales are in line with the expectations.

A new way for creating concepts

A big part in the development was played by the innovative organization of the design process, which was crafted and refined while working on the Twizy.

Once the project was completed, its success gave Renault the idea to reorganize creation process for other R&D projects, and today this flexible, efficient organization has been adopted by Renault R&D Advanced Design Studio. 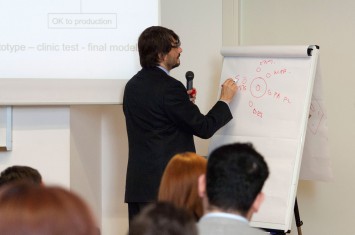 Luciano Bove explains: “Thanks to this innovative organizational structure, every year we are able to develop five or six projects, on different levels and for different market niches, always presenting to top managers “real”, working prototypes that they can directly test and evaluate.”

The efficiency of the process is based on competence.

Patrick Lecharpy explains: “You can have a small, efficient team only if you have the competences.”

“You need the creativity of very young designers to explore ideas, but the actual development can only be done by experienced designers.”

“Sometimes the tricky part is to motivate young designers to be part of the team and to learn from their colleagues rather than just aiming at having their sketch selected. It takes time to understand that in the end every personal success is based on the success of the team.” 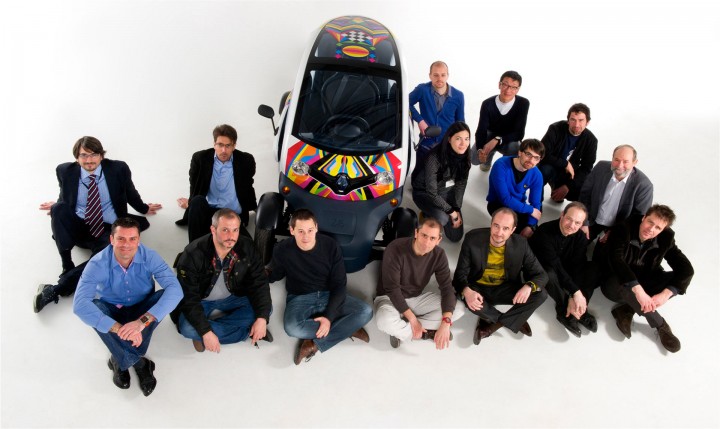 Luciano Bove adds: “We could achieve very good results because we had the chance of putting together a team of highly experienced designers with a highly critical eye and a good talent in conceiving new designs and judging them on screen. We were able to quickly correct them in the virtual stage with a good degree of confidence, so that when going physical we didn’t have bad surprises.”

Did you use any form of 3d sketch to transition from 2d sketches to cad a models?

PL: We use a quick 3D rendering process, with full size renderings. When you are dealing with innovation and new concepts, you need to physically feel the proportions. 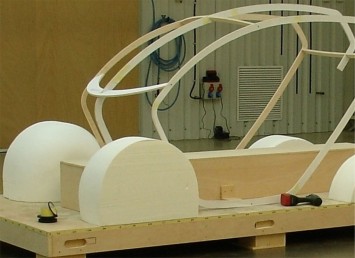 For this reason, after the first sketches we went into a rough 3D definition phase in order to build full size model as early as possible in the development process.

If you are in a design environment you already know – for example when restyling a production model – you can go extremely fast with 3D without taking too high risks. But when you design new concepts, you cannot judge the real dimensions and proportions until you actually see them.

LB: The physical prototypes are also important for showing and sharing the results with the rest of the team.

Experienced designers are capable of understanding 3D and evaluate design on screen, so what looks good in virtual has a 90% chance of looking good in reality.

But this is true only for designers. When you have a physical model it allows the entire team to evaluate the design and making decisions.

Is there any styling element of the concept you loved that didn’t end up in the final product? 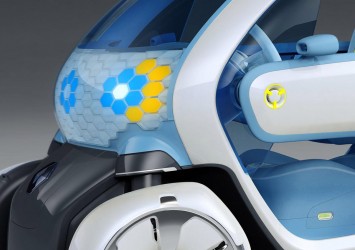 LB: We wanted to have an implementation of LED technology to create the interactive screen seen on the concept, but we couldn’t do it for cost reasons. Today LED technology is finally much more affordable, but when we were starting the project there were doubts about costs and investments. However this doesn’t mean we cannot do it in the future

PL: I agree, the vehicle is the one we wanted, the only thing [I’m missing] is LED screen that communicates moods and emotions.

What is the thing that you are more proud of?

LB: I am extremely proud of being part of the Twizy project: it is the typical project every designer dreams of working on.

In the automotive industry it is usually very difficult to develop projects like this, so they are often assigned to design schools, with the hope that one day some elements can be integrated in production models.

PL: The biggest satisfaction for a car designer comes when a project is completed, the customer drives the vehicle for the first time and what he/she says matches exactly the brief you formulated at the beginning. It means you have achieved concretely what you had imagined conceptually. 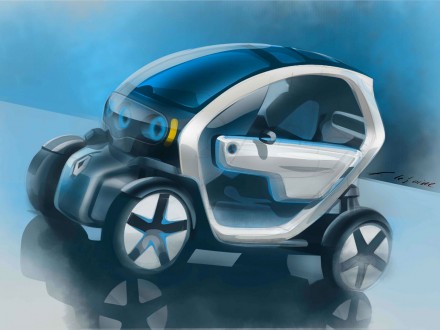 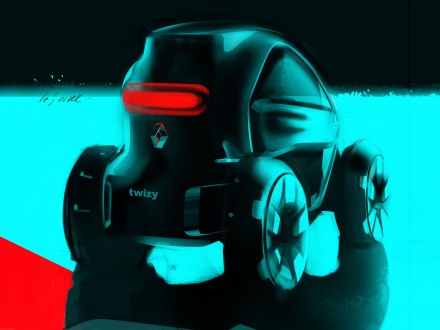 This Thursday 10th May 2012 Scuola Politecnica di Design will host a presentation of the Renault Twizy design story with Patrick Lecharpy and Luciano Bove.