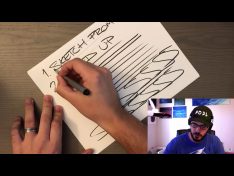 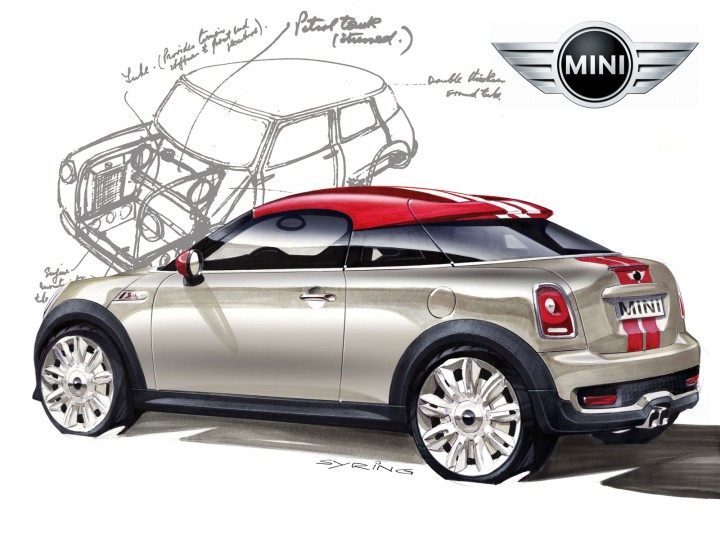 An official overview of the design principles and philosophy adopted by MINI, with a summary of the distinctive styling cues of the brand and a gallery of images including new sketches and photos.

The information reported below – selected from two recent official articles – give an in-depth overview of  MINI’s core values in terms of design and aesthetics, and summarize the trademark styling elements. 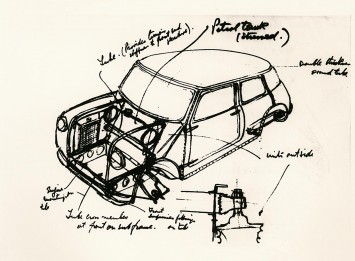 MINI design is the evolutionary continuation of the legendary formal language that defined the classic Mini of 1959.

As such, it embodies automotive history that is very much alive. With his classic Mini, Sir Alec Issigonis designed a revolutionary small car that offered the largest possible interior on the smallest possible footprint, transposing the design maxim “form follows function” to automotive construction.

To this day it remains one of the key design principles underpinning the MINI brand – one which not only thrives on its heritage but interprets it anew on a daily basis. 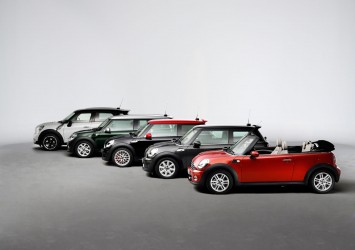 Since the relaunch in 2001 under the umbrella of the BMW Group, the persuasive design of this premium small-car brand has been largely rooted in its unmistakable, style-setting, ever-inspiring formal language.

The MINI design philosophy ensures that the hallmark brand features are regularly revised in keeping with the times, while simultaneously preserving the essential MINI character.

The systematic expansion of the model family bears witness to the capacity of MINI design to breathe new life into the brand’s fundamental values. 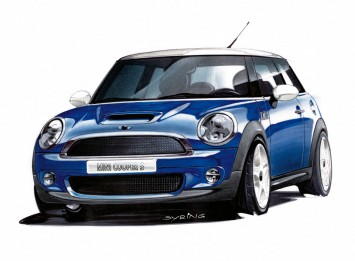 One of the foremost principles of design is expressed in the well-known maxim form follows function. In the case of MINI, for example, the spatial concept is unique in its segment, while the transversely mounted engine ranks as a revolutionary idea with which Sir Alec Issigonis made significant waves in the motoring industry at the time.

On the outside, the principle of dynamic orientation generates a forward thrust with the window contours opening out towards the front, while at the same time dynamically showcasing the car’s sporty character even in stationary mode.

Resting powerfully on its tires, the MINI reinforces this sportiness further. 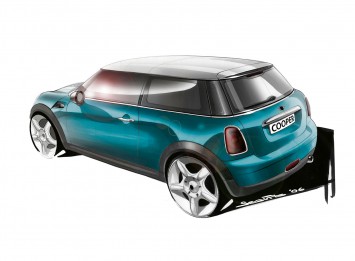 Known as “stance on the wheels”, this principle places the four wheels at the extreme corners of the car body, lending the MINI its typical go-kart handling coupled with the appropriate look.

The vehicle body “cascades” towards the road surface with increasing mass, resulting in improved roadholding.

MINI design is based on a clear formal language that is defined by the play of lines, seams, circles and ellipses.

The human body archetype principle sees MINI unite all three archetypes of the human body: the engaging cuteness of a child, the striking, muscular shoulders of a man, and the flowing, soft forms of a woman.

It imbues the design of a MINI with an emotionally charged, three-dimensional form. 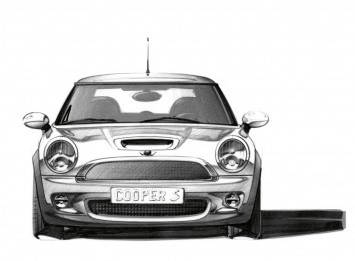 The typical, iconic face of the MINI with its hexagonal radiator grille and round headlights recessed into the bonnet makes for a friendly and open appearance, its proportions and appealing expression accentuating this positive impression.

The broad stance and powerful shoulders evoke safety, while gently flowing forms sculpt the body. The play with parallel lines, curves and muscles is style-defining for MINI and can be found in both the exterior and the interior design.

Iconic cues such as the front headlights, hexagonal radiator grille and elliptical door handles are further accentuated by chrome surrounds.

These jewellery icons highlight the key importance of these elements and point to the heritage of the brand.
Under the premise of order vs. complexity, MINI allows the option of uniting many functions within one component. 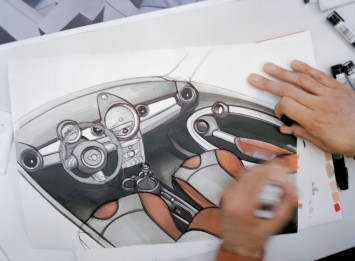 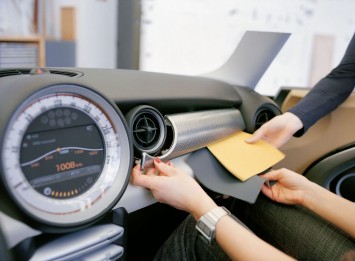 A striking and characteristic example of this is the central instrument in the car, the so-called Centre Speedo, which houses not only the analogue speed display but all entertainment and navigation functions as well in a single form. 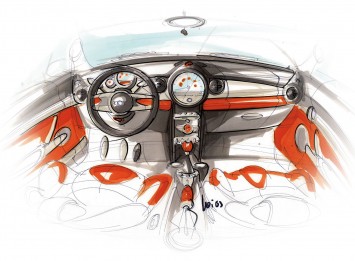 MINI continues its play with basic geometric forms inside the car as well. The interior design of a MINI is sporty and masculine in character, further reinforced by a dynamic cockpit ambience.

Eye-catching accents are created by elliptical forms reflecting the language of the exterior circular elements within the cabin as well.

Round air vents on the outer edges of the dashboard lend the front area a broader look, emphasize its horizontality and allow an elegant transition to the door trim. The Centre Speedo is mounted in the middle. 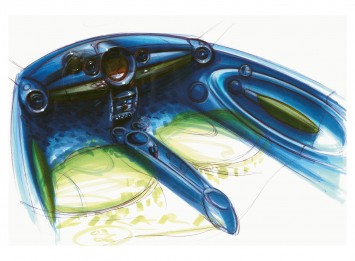 The raised, central position of these elements makes for ergonomically optimal use, with all operating elements transparently structured.

The hallmark MINI toggle switches are not only integrated in the centre stack, but optionally also in the roof liner, further intensifying the cockpit character of the interior.

In the rear, the wide track grants more legroom while additional door ellipses enhance the sense of space. Integrated in the ellipses are the circular door openers, along with the loudspeaker grille and the door pocket with the floating armrest. 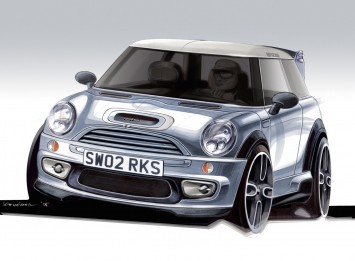 “MINI has a strong heritage as a sub-compact car and style icon. MINI today is a cult, a way of life, and more contemporary than ever. We will continue to successfully develop the essence of MINI in the future as well.”

“MINI will remain a very authentic brand. For us, authenticity is a paramount issue and will in the future be expressed more strongly through lightweight construction and enhanced efficiency as well.

“MINI is a compact and intelligent premium small car and, in its entirety, simply irresistible,” states Anders Warming, Head of MINI Design.

Over the years, the styling of MINI cars has produced a host of design icons which have become synonymous with the brand as a whole and, in some cases, signature features of individual models. Collectively, these iconic elements have helped shape the identity of the brand and its cars. 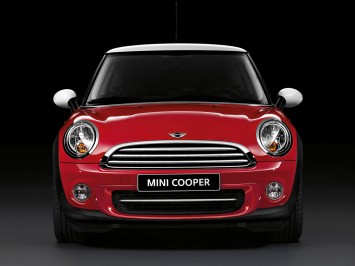 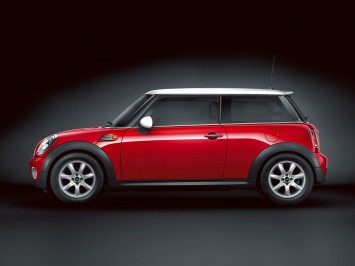 Dominated by the elliptical headlights set into its bonnet, the face of the MINI is extremely distinctive. The contemporary interpretation of the classic hexagonal radiator grille plays its part in defining the car’s eye-catching appearance. Other distinguishing features of the car’s face include a pair of “beauty spots” in the form of circular foglamps.

A shoulderline rising from front to rear and windows tapering towards the rear produce the hallmark MINI dynamic wedge shape. 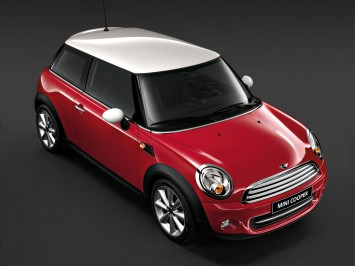 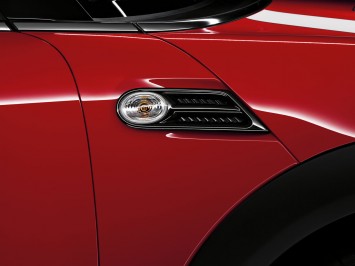 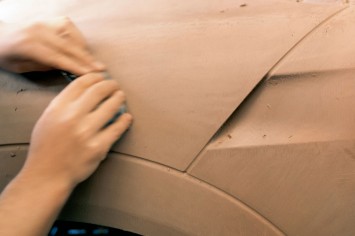 The design of the greenhouse – the glazed section of the passenger compartment – creates the impression of a band of glass wrapped around the car. The high-gloss black A, B and C-pillars are integrated into the glass surfaces.

This design cue can trace its roots back to the very beginning; it follows the line of the welding seam sloping down the front side panel of the classic Mini. 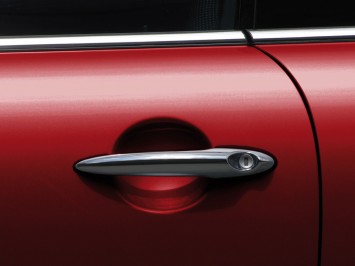 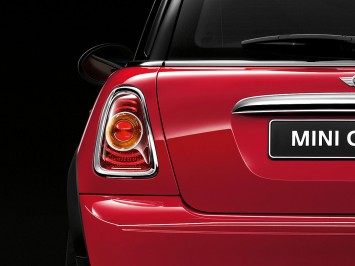 The chromed door handles of the classic Mini have since been revisited repeatedly, ensuring iconic status. Like a handshake, opening the door of a MINI represents the initial physical introduction between the car and its driver.

The unmistakable, vertically stacked rear lights represent another nostalgic nod to the classic Mini. They are bordered by an elegant chrome surround sealed against the body without any direct connection to joins and seams. 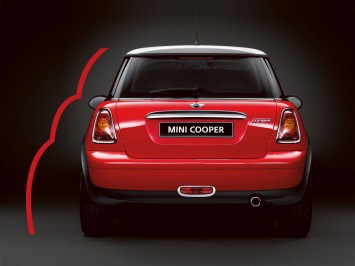 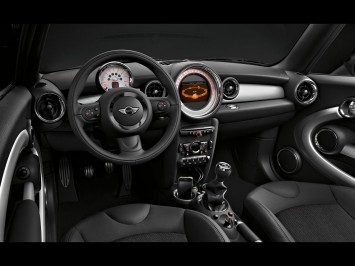 Stance on the wheels

The go-kart handling for which MINI is famed is the product of having its wheels mounted at each corner of the car – similarly to a go-kart. The mass-increasing “cascading” effect of the body as it heads down towards the wheels gives the car its essential roadholding.

The interior of the car also references the classic Mini to create its air of authenticity. The clear structure of the controls is a typically MINI feature. Elliptical forms transplanting the style of the circular exterior elements inside the car add further distinctive touches. 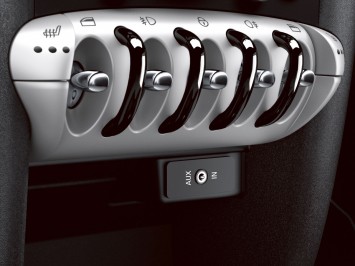 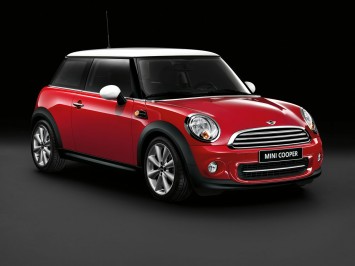 Controls like the distinctive toggle switches add an extra flourish to the centre stack and even the roof liner.

An array of chrome highlights and beautifully worked details are integrated like gems into the design of the car. 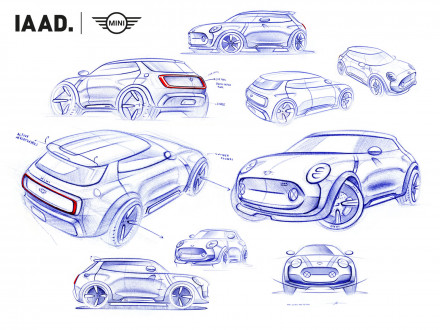 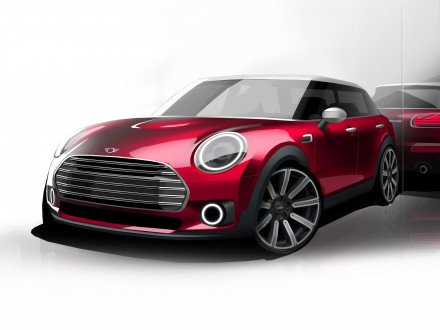